History of the Scroll of Honor

In 2001 as we were planning for the fall Military Appreciation Day, one of the members of the Clemson Corps suggested that we somehow identify Clemson Alumni who had died in service to their country.  Others agreed this would be a critical aspect of perpetuating Clemson’s strong military heritage.

Members of the Clemson Corps then began to collect names of those alumni who had given the ultimate sacrifice while performing their military duties.  The Scroll of Honor was created to recognize these heroes and was unveiled at Military Appreciation Day in 2002.  The original Scroll of Honor was in a portable frame that we moved from place to place on campus.  Later we realized that a temporary, portable scroll was not befitting the sacrifice these great alumni had made.  In 2005 we began to consider a permanent memorial on campus that would bring appropriate honor to these heroes.

In our research we found a document from 1942 that certified that the new football stadium would be named Memorial Stadium to honor Clemson’s alumni who “have made the supreme sacrifice in the service of their country.”  This drew us to the area of the stadium for a site for the memorial.  In 2006 we obtained the wholehearted approval of the Athletic Department to use the site upon which the Scroll of Honor Memorial now stands.  It is on an axis that extends straight from the West Zone, through Howard’s Rock to Tillman Hall.  In March 2007 we proposed the Scroll of Honor Memorial to the University Administrative Council and received their 100% approval to proceed.

With the gifts from thousands of alumni and friends of Clemson, this memorial became a reality.  Ground breaking was held in August 2008.  Construction began in April 2009, and the Memorial was dedicated in April 2010.

Symbology of the Memorial

This is a place people of all ages can come to gain an understanding of the sacrifice that was common among a special group of Clemson’s alumni. There is symbolism designed into every aspect of the Memorial so that the Memorial embodies a clear and simple expression of the character and attributes held among Clemson’s fallen. 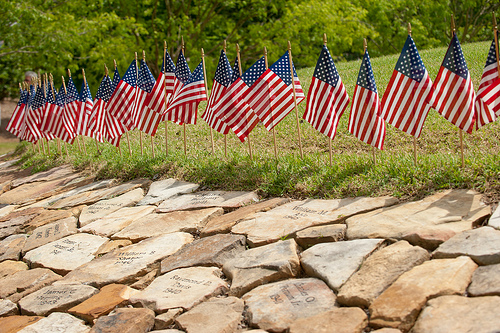