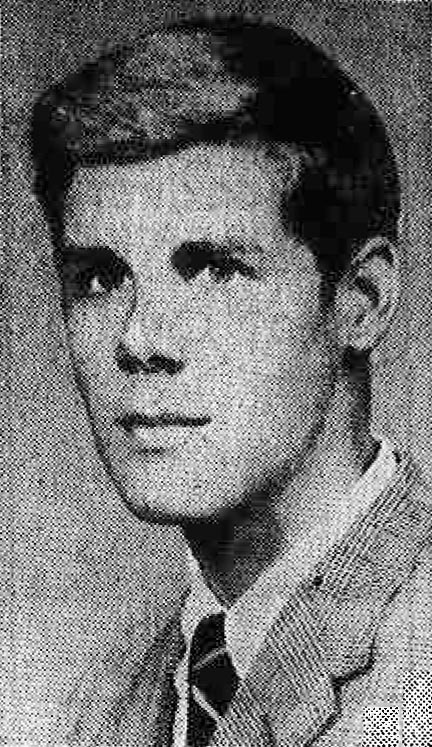 "Alan grew up in Columbia, SC, son of Hal and Charlotte Kohn.  They were staunchly devoted Lutherans, and Hal grew up in Newberry, SC, which is in the heart of that area of SC settled by German Lutheran immigrants in the latter half of the 1750's.  They were devoted parents, who also emphasized the arts, especially singing and music.  Charlotte taught piano, and both sang in the church choir.  Hal made the communion wine for the church also.  He worked in a local life insurance company along with others from that same Lutheran family.

Alan and I were classmates, growing up in same church, same Boy Scout troop, and same junior high and high schools.  He was serious, and yet had a lot of fun.  Alan particularly liked automobile mechanics, and had some interest in drag racing.  One night, we were almost killed when Alan drove his old early 1950's Dodge to the end of the drag strip then at Blaney, SC.  We were cutting across the end of the track to get on the other side. Unbeknown to us, this end of the track was at a slightly lower elevation than the starting area at the other end. So, the dragsters and officials could not see us. We looked up and saw two racers hurtling toward us at >100 mph.  Just then, the old fluid-drive transmission did not respond very quickly to Alan's depression of the accelerator, resulting in two scared high school kids and, just as quickly, relieved once that transmission took hold, and we had cleared the track.

I attended The Citadel, and did very well academically, plus very active in Army ROTC.  Alan went to Clemson, and his academic performance was not good.  I well remember him looking at me and asking, "You still making those good grades?"  It hurt for me to tell him, "Yes."  I counseled him to go ahead and enlist, so that he could possibly have some choice of military occupational specialty, assignment, etc.  I reiterated that, with his love of mechanics, heavy vehicle maintenance was a good possibility.  He shook his head, saying he would go with the draft, "cause that's only two years, and enlisting would be three years."  I never saw him again.

Four months later, I was preparing for Army ROTC summer camp to be held at Ft. Bragg.  My usual way of training back then was to run around the neighborhood in Columbia, wearing sweat clothes and combat boots.  One day, I ran into Mr. & Mrs. Kohn, and they asked what I was doing.  There was an awful look of anguish that came on his mother's face when I told her that I was preparing for Ft. Bragg.  Again, I felt that I had "hurt" her just doing what I was doing.

One last thing, the Kohn family including Alan, were some of finest people I have known.  Alan's loss still causes me to pause, to reflect, to tear up a bit.  To this day, I think of his friendly smile, and gentle nature.  A wonderful friend!

By the way, his parents donated a perpetual flame for the church that hangs down over the sanctuary area adjacent to the altar.  It is a fitting and beautiful reminder to all of Alan's death."

"When I say Alan was my friend, this is very true, but I must admit Alan and I were not "close" or "best" friends as I knew him primarily as a fellow student in the early to mid 1960's at Dreher High School in our home town of Columbia, SC.

Alan was the type of person you remember for all the good reasons.  He was a good guy.  My guess is everyone who knew him would have described him as their friend.  He was just likable with a "real" and very kind caring smile.  When you engaged Alan in a conversation, he gave you his full attention, and whether or not he was interested in the subject you would have never known.  He respected people regardless of their background and social standing.

It has been over 40 years since I last saw him so the memories are a bit fuzzy but I most remember talking to him about cars and girls, nothing uncommon for teen boys.  Like so many other high school friends, I lost contact with Alan after graduation and my next memory was receiving the sad news he was KIA as of March 1968 in Vietnam.  I did not learn of this until my return from Vietnam in March 1969.  At about this same time I learned about another Dreher schoolmate, Jerry Hollingsworth, who was KIA in May of 1968.  Jerry was also a good guy.

One can only speculate about what life would have had in store for Alan, Jerry, as well as our other schoolmates, Doug Keefe and Hugh Blackburn, who were also KIA within a 12 month span of each other in 1967 & 1968.  I knew Doug least of all, but for all I am now and will forever believe, they would have made wonderful and fulfilling lives for themselves and their families and would have been positive contributors in their communities, the country and the world.

In closing - but for the grace of God, it could be me, you, and any of the 50,000 others who gave the last full measure in Nam writing this story about one of their friends.  Regardless of whether Vietnam was or was not worth the loss of so many brave souls, we still owe much to all who served and especially to those who gave their all in the service of their country." 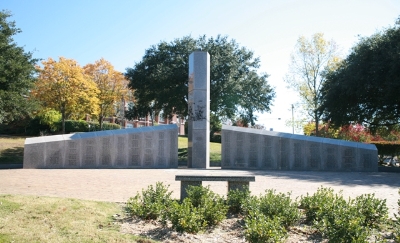 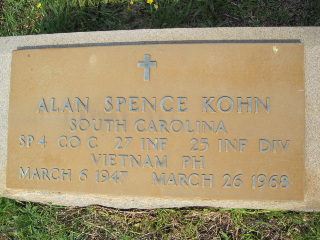