In August 1943, Roosevelt approved the shipment of chemical munitions containing mustard agent to the Mediterranean theater.  On 18 November 1943 the John Harvey, commanded by Captain Elwin F. Knowles, sailed from Oran, Algeria, to Italy, carrying 2,000 M47A1 World War I type mustard gas bombs, each of which held 60-70 lb of sulfur mustard.  After stopping for an inspection by an officer of the 7th Chemical Ordnance Company at Augusta, Sicily on 26 November, the John Harvey sailed through the Strait of Otranto to arrive at Bari.  Bari was packed with ships waiting to be unloaded, and the John Harvey had to wait for several days.  Captain Knowles wanted to tell the British port commander about his deadly cargo and request it be unloaded as soon as possible, but secrecy prevented him doing so.  On 2 December 1943 88 German aircraft attacked Bari, killing over 1,000 people, and sinking 17 ships, including the John Harvey, which was destroyed in a huge explosion, causing liquid sulfur mustard to spill into the water and a cloud of sulfur mustard vapor to blow over the city 628 military victims were hospitalized with mustard gas symptoms, and by the end of the month, 83 of them had died.  The number of civilian casualties, thought to have been even greater, could not be accurately gauged since most had left the city to seek shelter with relatives.    Extract from https://en.wikipedia.org/wiki/SS_John_Harvey 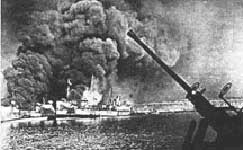