"By the grace of God, my kinfolks and I are Carolinians..." - First line of Red Hills and Cotton

Ben Robertson, Clemson class of 1923, editor of "Taps; "founding piano player of the school's dance band, "The Jungaleers:" blood-kin to half of Pickens County and linked somehow to the rest; world-renowned war correspondent; author of "Red Hills and Cotton" - a memoir reviewed by Stephen Vincent Benet as "the most beautiful book ever written about the South;" beloved of a vast family, and of friends he had made, lowly and regal, the whole world around, died in a plane crash on his way from home, back into the war, on February 22, 1943.

Ben studied horticulture at Clemson, where his father kept an office as state chemist.  But when he finished here he went on to study journalism at the University of Missouri, and took the first of a string of newspaper jobs, at the Charleston News and Courier for a few months.

He was marked at birth by the Southern Mainline that ran through Calhoun, not far from the Robertson household, rattling the living and the dead, just as the Pickens Doodle whistled at every crossing past the farm of his nurturing Bowen grandparents on Wolf Creek.

Once he was grown and free on the world, every few months or so, that embedded steam whippoorwill called him to rise and move on.  And move he did - usually to another newspaper, but not always.  For a brief time he worked for the Red Cross; once he was a merchant seaman, and warmed, for a little while, a diplomatic chair in Java.  In all, he held at least 15 jobs in a life that ended before he turned 40.

As a world war loomed in the 1930s he roamed and reported from Australia across Europe to Russia and India.  But it was in the company of his friend Edward R. Murrow, on a high bluff in Dover, that Ben had his revelation.  The Battle of Britain was raging; reporters were diving, time to time, for the spurrious protection of a hay stack, as overhead, British fighter planes battled German bombers bent on destroying England.

"I lost my sense of personal fear because I saw that what happened to me did not matter.  We counted as individuals only as we took our place in the procession of history.  It was not we who counted, it was what we stood for.  And I knew for what I was standing - I was for freedom.  It was as simple as that.  I realized the good that often can come from death.  We were where we were and we had what we had because a whole line of our people had been willing to die.  I understood Valley Forge and Gettysburg at Dover, and I found it lifted a tremendous weight off your spirit to find yourself willing to give up your life, if you have to - I discovered Saint Matthew's meaning about losing a life to find it.  I don't see now why I should ever again be afraid."

Out of such times came his first highly-successful book, "I Saw England."  As in everything else he wrote, his touch was uniquely human.  People mattered, braving the rubble-strewn streets, jamming into dank basement shelters, charwomen and titled heads, cheek by jowl.  Among those who became most dear to him were a stolid Scottish hotel maid, Maude Hall, and Lord and Lady Astor.

As his lifelong friend, Ben's fellow Clemsonian and newsman, Wright Bryan, remembered the "fraternity" of friends Ben had gathered, world wide.  "I have attended meetings of the fraternity, where two or more were gathered, in a drug store in South Carolina, in a tent in Normandy, in a boxcar on a Russian railroad."  So far-flung, and faithful, were the friends of Ben Robertson.

In such a life, friendships were clearly easier to maintain than a marriage.  So Ben never had one.  What he did have was a devoted young woman friend named Jeanne Gadsden, down in the Lowcountry, with whom he shared the foster parenting of a child Ben brought out of the devastation of Britain, and presented into Jeanne's care.  Though Jeanne died while still fairly young - after Ben's death, she never married - she raised little Leslie Phillips into a fine man who made his career in the U. S. Air Force.

So often on the move, Ben had taken a job as London Bureau chief for the New York Herald Tribune and in February, 1943, he was on his way back to England.

The Yankee Clipper, built to land at sea, was an elegant, flying palace, with sleeping berths and a fine dining room upstairs.  Among the 38 on board that day were a group of entertainers on their way to USO dates in Europe.  Across the aisle from Ben was celebrity singer Jane Froman, Ben's college friend from the University of Missouri.  They were delighting in the coincidental meeting.

On the way, the plane was to land in Lisbon, briefly.  The weather was stormy.  As the pilot approached a landing, a wing tipped into the Tagus River, and the Clipper was swamped.

When the body was recovered, several days later, it was sent home in an ornate Portuguese casket, and after a service at the college, Ben was buried in the family plot in Westview Cemetery in Liberty.

In a eulogy broadcast on CBS Feb. 28, 1943, Edward R. Murrow said of his friend, "He is out of the war, and into peace.  There was never a night so black Ben couldn't see the stars."

Written by: Dot Jackson a kinswoman from Pickens County, March 2010

The SS Ben Robertson, a Liberty Ship, was launched January 5, 1944 from Savannah Gerogia.

"An English professor I had in college once berated me at a poker game for recommending this book.  He had never heard of it.  I gave him a copy.  I can only imagine the sardonic moment in which he finally picked it up.  He loved it.  The book was given to me by a Capitol Hill policeman from North Carolina.  This is the sort of book that will help Yankees (like me) to understand the Old South; a truly liberal and enlightened view.  This is one of those books, whose author was struck down early in life, that makes you wonder what might have come from his pen had he lived.  These are memoirs, memoirs of the old folks that made up the backbone of the South after the Civil War up to the Great Depression, real, living people whom, thorough these pages, become a delight to get acquainted with."
Personal comment taken from the Web about Ben Robertson’s book Red Hills and Cotton.

Ben Robertson was the South’s most famous journalist, author, and war correspondent.  Author of three novels, including Red Hills and Cotton, he died in 1943 in a plane crash while returning to Europe as a war correspondent and was buried in Liberty, SC.  From Main Street in Liberty, turn onto S. Peachtree St., then right on to Old Norris Rd.  Turn left at the first paved driveway into the cemetery on your left.  Adjacent to a large above-ground crypt you will find a few tall Robertson family tombstones. 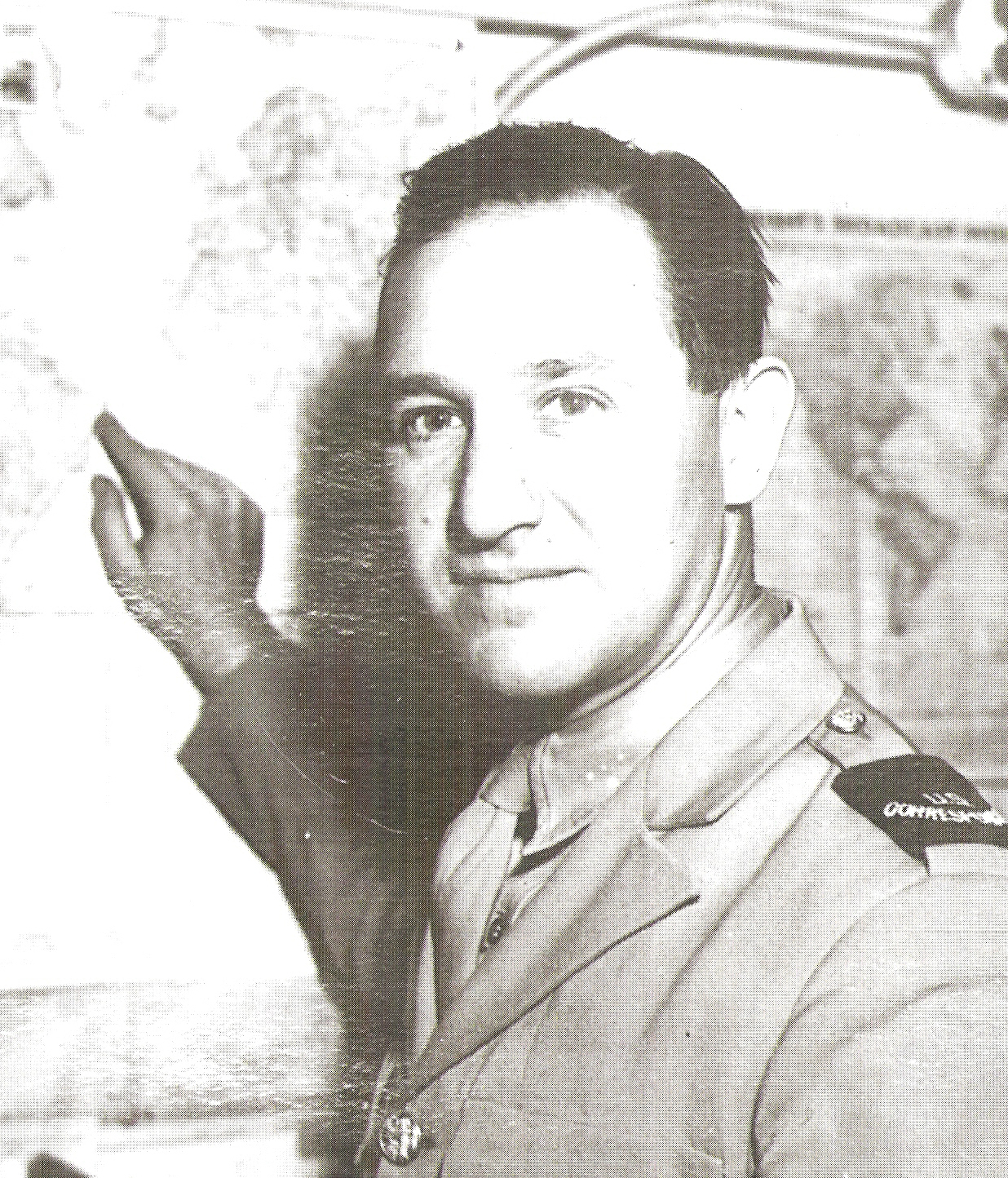 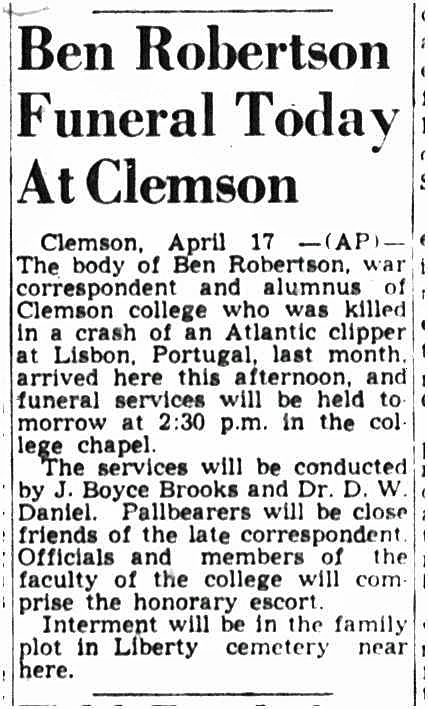 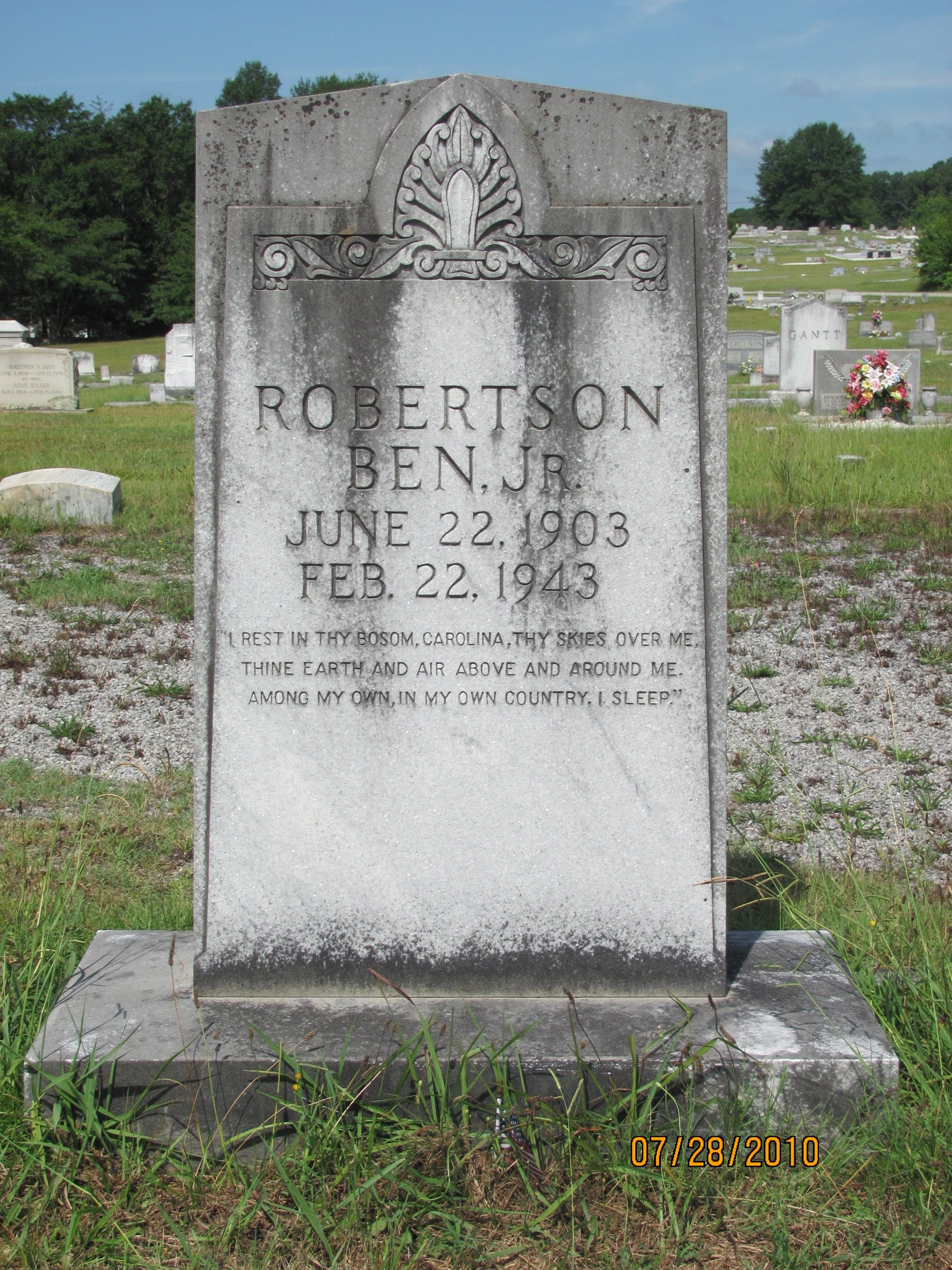