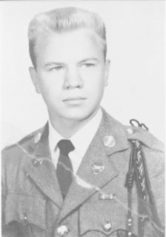 1961
Mechanical Engineering
Greenville, South Carolina
Survived by his mother, Mrs. Mary Lynn Maura Briggs
Air Force, Major
162 Tactical Fighter Training Group, Tucson, AZ
Apr 13, 1937
Jun 19, 1974
Upon returning to Tucson in an F-100 after a passenger drop-off at New Orleans, NAS, Majdor Briggs was cleared for an enroute descent and was observed passing FL310 at 46NM east of Tucson.  He followed vectors from Tucson Approach Control for a landing on runway 29R at Tucson IAP.  Radio handoff to Tower was accomplished when Major Briggs was 6NM from Tucson IAP, southwest of extended centerline, at 8800 ft MSL.  Upon contact with Tucson Tower, he requested a straight-in aproach instead of an overhead pattern for which he had previously been cleared.  He then stated he had a stuck throttle and that he may land short.  The aircraft impacted the ground 5430 feet from the approach end of runway 29R, slightly right of runway centerline at 2012 MST.
East Lawn Palms Cemetery and Mortuary, Tucson, AZ.
SW 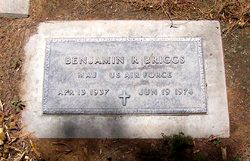 Stuck Throttle – Vignette in The Echo written by Kelly Durham