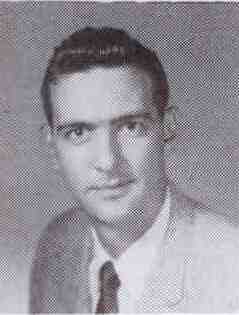 I returned from Korea in the early summer of 1953, was assigned to duty at Fort Jackson, and shortly thereafter assumed command of a basic training company.  Shortly after the cycle of troops which I inherited completed their training, the company received a new group of trainees among whom was Charles W. Lollis.  Most likely the reason I remembered him approximately six years later when he entered Clemson was because my First Sergeant had recommended Lollis be chosen as a Trainee Leader; and, I think we assigned him as an Acting Platoon Sergeant.  I do not remember whether the First Sergeant's recommendation was based on the fact Lollis had completed a year of college or perhaps -- as was often the case at that time -- he had spent a little time in a reserve component prior to being "drafted" (technically, such men were not draftees, but were individually ordered to active duty for two years).  In any event, Lollis displayed leadership and made a good mark for himself during the eight weeks of Basic Combat Training he was with me.  At the end of the cycle, he and the other 200 or so trainees were sent to new units for Advanced Individual Training -- many at other Posts.  Based on information from his family, I presume Lollis was sent to Fort Devens.  In any event, I soon became absorbed with the next cycle of trainees, and thought little more of Private (Acting Sergeant) Lollis.

Almost six years later after I had left the active army, assumed reserve status, and was the Admission Officer at Clemson, I again had the opportunity to serve with this good man.  My reserve battalion, in which I was a Company Commander, had a continuing need for new lieutenants.  As the person processing applications for Clemson, I was always on the alert for applicants who indicated having had military service.  I expect that in this process I noticed the Clemson application of a first lieutenant by the name of Charles W. Lollis among those seeking admission in 1959, and recognized he was quite likely the person who had been a trainee in my company in 1953.  I contacted him shortly after his arrival and indeed he was the same man.  After completing Advanced Individual Training, Charles had been selected to attend OCS and earned a Commission.  Some four to five years later he decided to return to college, and he chose Clemson which was near his hometown of Liberty -- and, of course, he wanted to continue his military career by serving in the Army Reserve.  I think he may have been assigned to my company, but in any event he became a member of one of the three companies stationed in Clemson and we "drilled" together.

After a year or so, Charles was selected to be a Company Commander and was soon promoted to Captain.  A relatively short time later he decided to return to the active Army, and the next I knew of him was, sadly, to notice his obituary in the newspaper.  I did note with pleasure that after returning to active duty he continued to be recognized as an outstanding soldier by having been promoted to Major.  Some years later when in Washington I visited the Viet Nam Memorial, and paid my respects to the memory of this good man and officer with whom I was privileged to serve on two occasions.

The following tributes were copied with the approval and provided courtesy of the Vietnam Veterans Memorial Wall page, www.thewall-usa.com:

I knew MAJ Lollis as a young boy. He was someone I looked up to and I was crushed when my father told our family about his death when we lived in Eagle River AK. My father and mother, Perry and Martha Caraway, were friends with MAJ and Mrs. Lollis. Their family came to our house in Eagle River several times and, although the details became fuzzy over time, I remember that my brothers and sisters had much fun with the Lollis children. My mother gave me the book that his wife published using his many letters home. I have read this book many times over the past years and have asked my mother many times if she knew how to get in touch with the family. Sadly, my mother did not have an address through which to contact anyone. So many, many years have passed since the Major's death in Vietnam and we did not have the opportunity to attend his funeral, so we never got to say goodbye or express our eternal thanks to his family for their sacrifice to our nation. My mother and father have passed away, and as I have grown older, I still look at the picture of myself riding on the shoulders of a tall straight-backed, strong US Army Soldier with a great big smile on his face. My family was indeed fortunate to have this friendship. God Bless MAJ Charles Lollis' family and extended family.

I am married to Maj. Lollis' oldest daughter, Janice. I notice that the wall information has Charles Lollis as being from New Jersy; howver, Maj. Lollis is from Liberty, South Carolina.

Why Vietnam? I married this man's youngest son. I have heard so many wonderful stories of his bravery and leadership. I feel like I know him. We have a picture of him at home on our "wall of frames". I did not have any knowledge or understanding of the Vietnam war prior to my husband and his family. I have come to sppreciate and respect everything that was done for this country. I only wonder if the men of today would do the same.

Charles W. Lollis was my grandfather. I never got to meet him because he died before I was ever born. I've heard many wonderful stories about him from my dad.  My granddaddy Chuck died when my father was twelve.  I will never know how hard it was for him.  My dad has many awards that Grandaddy Chuck received.  The closest I will ever come to him is his grave which I visited in '96.  He is one of my greatest heros and I really do honor him for giving his life for our country.  I am waiting for the day when God brings me home so I will be able to meet him.

Citation to accompany the Legion of Merit awarded posthumously to Charles William Lollis:

By direction of the President, the Legion of Merit (Posthumously) is presented to Major Charles W. Lollis, United States Army for distinguishing himself by exceptionally meritorious conduct in the performance of outstanding services during the period 18 September 1967 to 6 February 1968 while serving as Logistics Staff Officer, Materiel and Services Division, Assistant Chief of Staff for Logistics, United States Military Assistance Command, Vietnam.  With great skill and patience, Major Lollis developed, coordinated, and implemented superior supply and maintenance programs for U.S., Free World and ARVN forces which notably realized more effective use of equipment and considerably enhanced the combat posture of these forces.  His personal efforts in resolving the many complex problems of equipping the Republic of Korea forces was a major contributing factor to their combat effectiveness in Vietnam.  The distribution of M16 rifles to U.S., Free World and Vietnamese forces in Vietnam was a tremendous logistical task that required consideration of competing operational requirements, a limited production schedule, an essential retrofit program and the ever changing tactical situation.  His astute handling of all facets of this program earned him great praise from senior officers of all forces concerned. Major Lollis was undaunted in fulfilling his responsibilities even though it necessitated frequent trips in and out of the contested areas.  Major Lollis’ courage, initiative, professional skill and dedication resulted in valuable and lasting contributions to the Republic of Vietnam, the United States and other Free World Forces in their joint effort to counter the communist threat to the Republic of Vietnam.  Major Lollis’ professional competence and outstanding achievements were in keeping with the highest traditions of the United States Army and reflected great credit upon himself and the military service.

The book Here Comes Charlie, compiled by Janice Harvey Lollis, Major Lollis’ wife, contains excerpts from letters written by Major Lollis during his tour of duty in Vietnam.  The book was published in 1978 by Crossroads Productions and Publications, Inc., Perry, GA.  The book concludes with a copy of the telegram from the Secretary of the Army notifying Mrs Lollis of her husband’s death as a result of hostile action and an excerpt from a letter from Chaplain Richard Perkins which provided Mrs Lollis a specific description of the incident.

Major Lollis was a fourteen year veteran of the US Army.  He was born in Greenville, SC and raised in Liberty, SC.  After graduating from Liberty High School, he attended Bob Jones University in 1952-1953.  He enlisted in the Army in the fall of 1953 and, after completing basic training at Fort Jackson, was assigned to Fort Devens, MA to attend the Army Security Agency School.  Upon completion of his assignment at Fort Devens, he was selected to attend Officers Candidate School at Fort Benning, GA, and, upon commissioning in 1955, was ordered to duty in Japan with the US Army Forces, Far East.  Prior to departure for Japan, he married his fiancée, Janice Harvey.  Upon arrival in Japan, he was assigned to a unit of the Army Security Agency, US Army Forces, Korea and after a year in Korea, he was reassigned to Fort Bragg, NC.  In 1959, Lt Lollis left active duty and returned to South Carolina and enrolled in Clemson.  He continued his association with the service as a member of the Army Reserve.  He attended Clemson for the full academic year of 1959-1960, then worked as the manager of a bowling alley and became involved in construction work.  In 1961, he accepted a position with the Sangamo Company in Illinois and remained there for six months.  By this time, he and his wife had four children, two sons and two daughters.  In January 1963, he returned to active duty in the Army in the rank of Captain and was assigned to Fort Gordon, GA as the commander of a Reserve Forces Training Company.  In 1964, after attending a Signal Officer Course at Fort Monmouth, NJ, he was assigned to Alaska as a member of the Signal Corps, specializing in cryptology, and remained there until 1967.  While in Alaska, he was promoted to the rank of major and was responsible for five communications outposts throughout the state.  After attending a Signal Officer Career Course at Fort Monmouth, NJ, Major Lollis received orders for Vietnam.  He served as a logistics officer on the staff of the MACV Commander, General William Westmoreland, at Military Assistance Command Vietnam Headquarters in Saigon supporting the logistical requirements of the Republic of Korea Forces and other Free World Forces in Vietnam until he was killed in action on 6 February 1968.  General Westmoreland said of Major Lollis in a letter to his widow that “he possessed a deep understanding of the situation in Vietnam.”

Maj. Charles William Lollis, 33, of Augusta, Ga., a native of Liberty, was killed in action in Vietnam on Feb. 6.  He was the son of William L. (Sam) and Eva Nations Lollis of Rt. 2, Liberty, and was a member of Curtis Avenue Baptist Church in Augusta.  He was an advisor with the South Korean forces in Vietnam. 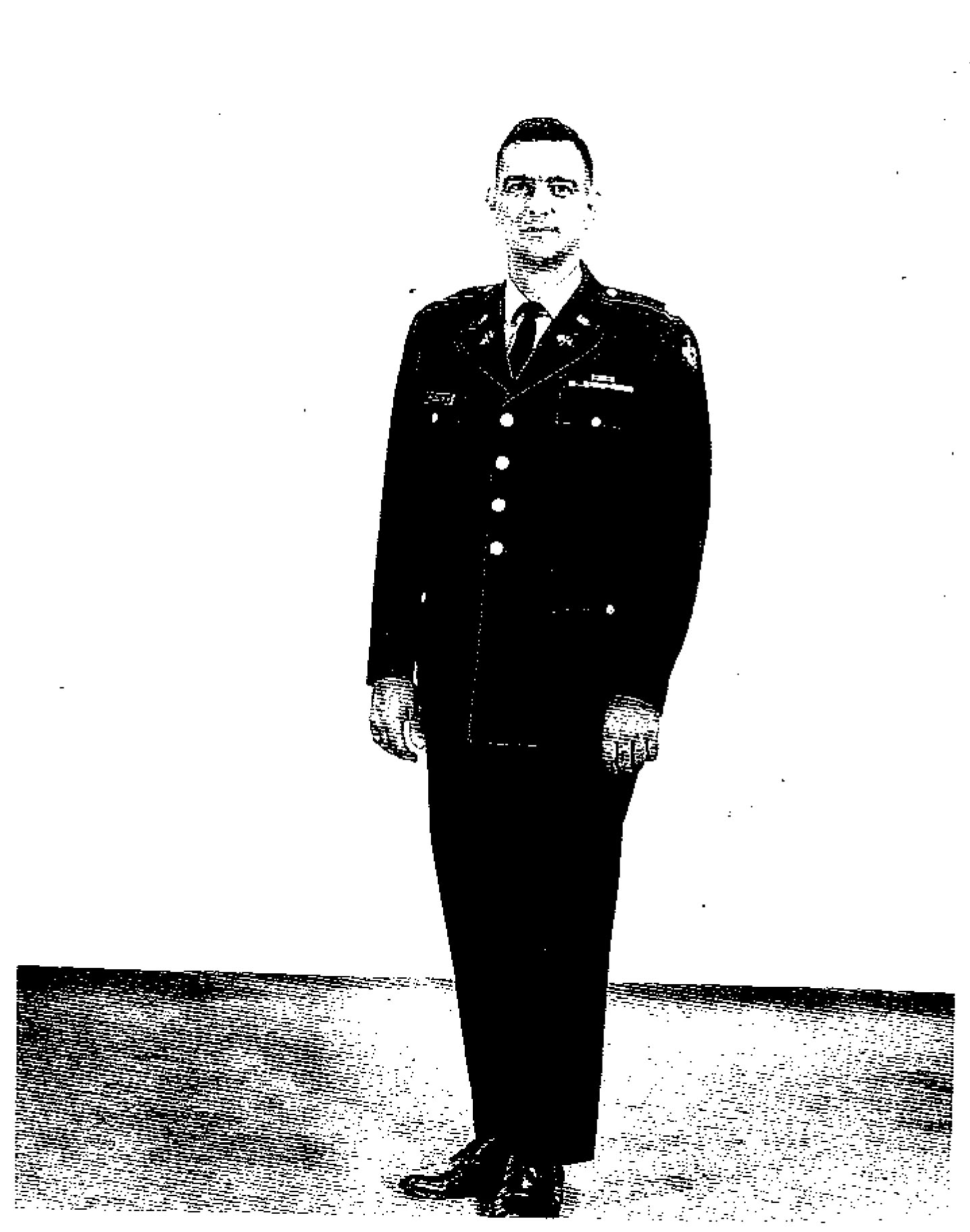 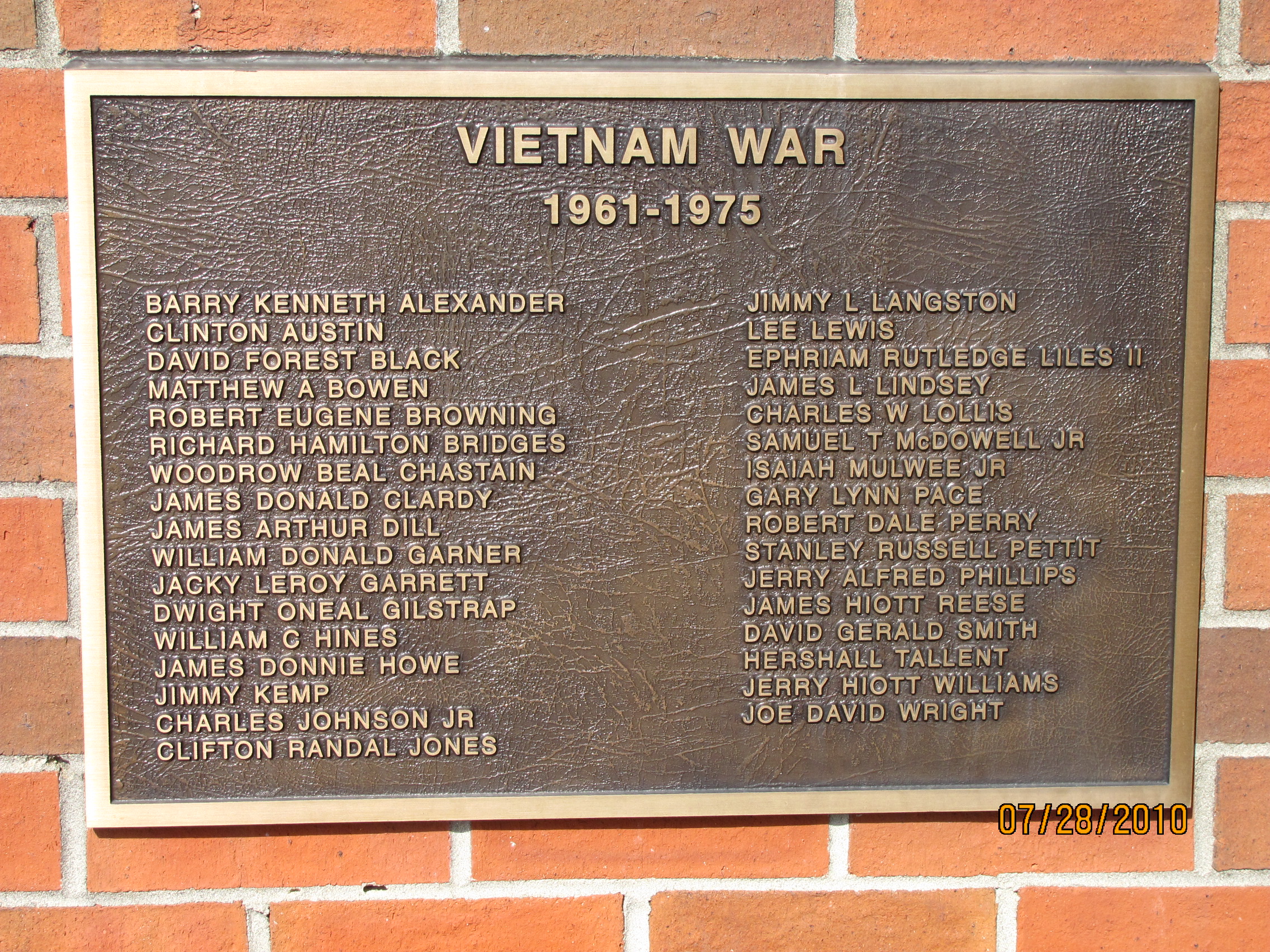 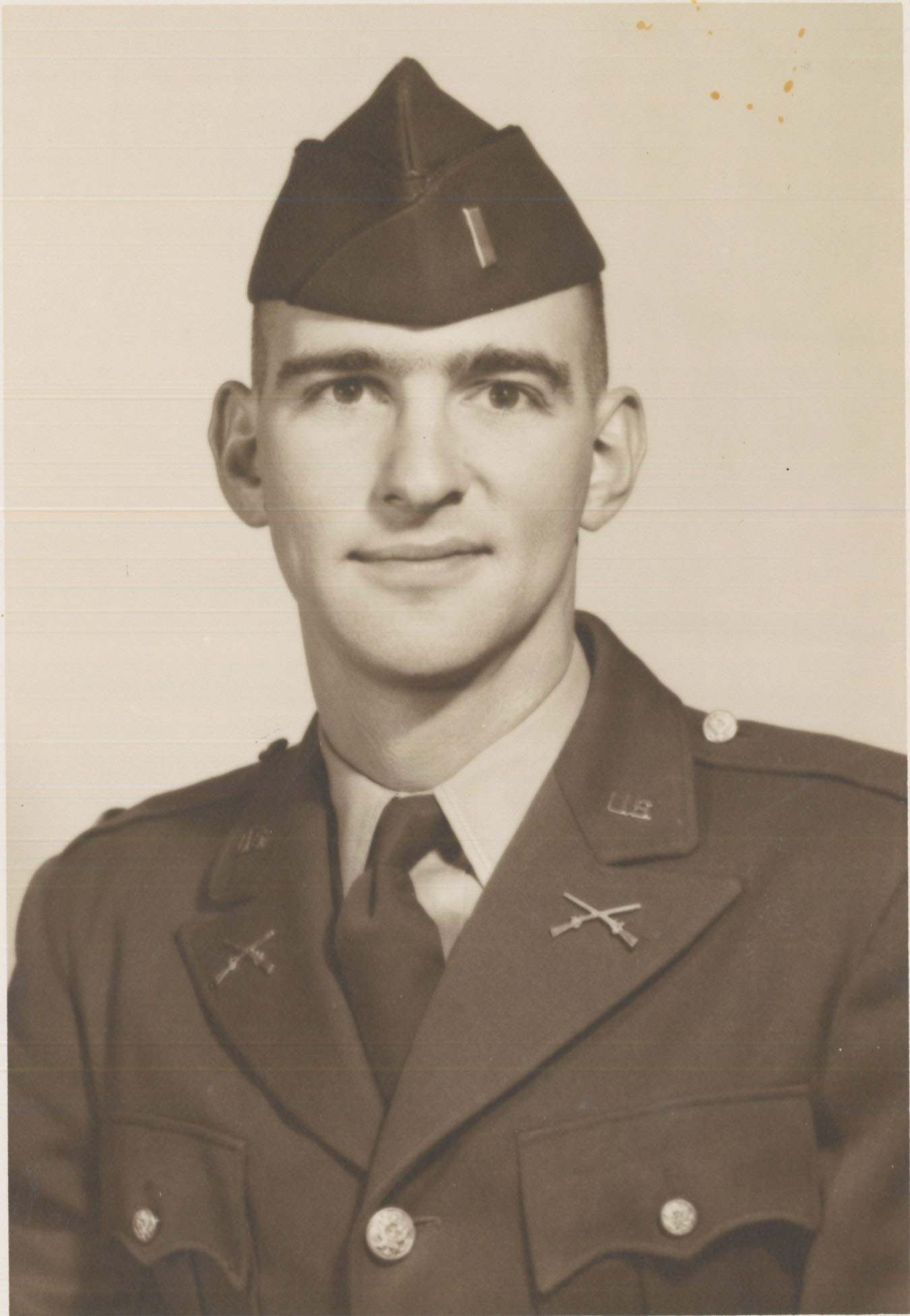 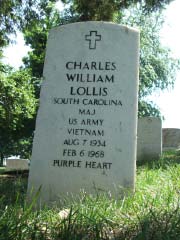 Vignette in The Echo written by Kelly Durham – Victim of Tet