He was with the Fifth Division and fought in the battle of Iwo Jima, being killed in action March 1, 1945.  He is buried in the McAlhany Cemetery in Branchville, South Carolina.  Survivors include his parents, Mr. and Mrs. D.C. Eaddy and a sister, Miss Mary Emma Eaddy, a student at Lander College, Greenwood.

Extract from The State:
On 19 February 1945, the Fifth assaulted the island of Iwo Jima with other elements if the 5th Marine Amphibious Corps.  Exposed to the full fury of the enemy's defenses, Marines clawed their way forward a yard at a time.  Across Motoyama Airfield #1, up Mount Suribachi, and then into the badlands of the Motoyama Plateau, the Fifth fought and died.  But, it never stopped.  Foot by foot, day by day; Marines pushed forward until the last Japanses pocket was crushed on 25 March 1945.  On 27 March 1945, the last Marines of the division sailed from Iwo Jima.  They had earned their nickname- "The Spearhead."  As their transports pulled away from the bloody island, few of them looked back.

On February 28, the 28th Marines moved north to help in the assault on the plateau.  Even as the 28th moved north, the First Battalion of the 27th Marines assaulted Hill 362A and were violently repulsed.  The taking of Hill 362A and Nishi Ridge would fall to the 28th Marines, with B Company in the forefront of the battle.  On March 1, 1945, the First Battalion would lose 93 men taking Hill 362A.  Twenty-nine of these men would be from Baker Company.  Early on the morning of March 1, naval ships saturated the surface of Hill 362A with heavy shells.  Low flying aircraft straffed, bombarded and rocketed the hill.  Marine artillery added their voice to the crescendo with their 105 and 155 guns.  The First Battalion, including B Company quickly captured Hill 362A.  It would take another two days to take Nishi Ridge a few hundred yards to the north.  Sixty-five men from the First Battalion would die and another 218 men would be wounded.  Hill 362A and Nishi Ridge cost B Company 72 wounded and 18 dead.  Those killed were: Cpl. Carl B. Hoppe, Mvt. Owen E. Taylor, Cpl David C. Eaddy, Jr., Pvt. Leslie S. Yost, Cpl Thomas J. Miller, Pfc Paul L. Adams, Pfc John W. Brannon, Jr., Pfc James A. Butler, Cpl. Raymond J. Huber, Cpl. Hurchel G. Luckett, Pfc Floyd J. Nuthals, Pl. Sgt. Harry K. Scarborough, Sgt. William W. Woods, Pfc. Ludwig. A. Halas, Pfc Oswald G. Lowrance, Pfc. Leonard M. Niedbalski, Cpl Donald F. Ward, and Pfc. Paul W. Watson.
From The First Battalion of the 28th Marines on Iwo Jima: A Day-by-Day History by Robert E. Allen

“The First Platoon of Baker Company, which successfully crossed Iwo Jima in less than two hours and was the first to arrive on the west coast, had survived the Suribachi assault with most of its top leadership intact.  The taking of Suribachi had cost the First Platoon eleven of its men, including Sgt. J.D. Dawson, squad leader of the second squad, Sgt. Harry L. Risher III, squad  leader of the third squad, Cpl. Arlyn G. Brown, a fire team leader in the second squad, and Cpl. Robert. C. Jacobson, a fire team leader in the third squad.

When the men of the First Platoon moved around the right side of Hill 362A, grenades and mortars rained down on them, and machine gun fire raked their ranks.  Lieutenant Wright fell with shrapnel in his thigh and back; Pl. Sgt. Jesse J. Sutfin suffered wounds from shrapnel in his right arm and shoulder; and shrapnel struck Sgt. Alphonse Martel (platoon guide) in the neck.  In the heat of battle, three other men of First Platoon fell, including Cpl. David C. Eaddy, Jr., a fire team leader of the second squad.  During the night a single hand grenade wounded three more members of the First Platoon (pg 106).”  Also Copied from a remembrance and tribute of:  Bob Allen, B Company, 28th Marines USMC987332
Extract from: https://www.network54.com/Forum/52192/thread/959634367/last-1094271429/GyGsMailbag-+Memorial+Day+2000-Lest+We+Forget+(Iwo+Jima)… 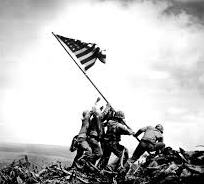 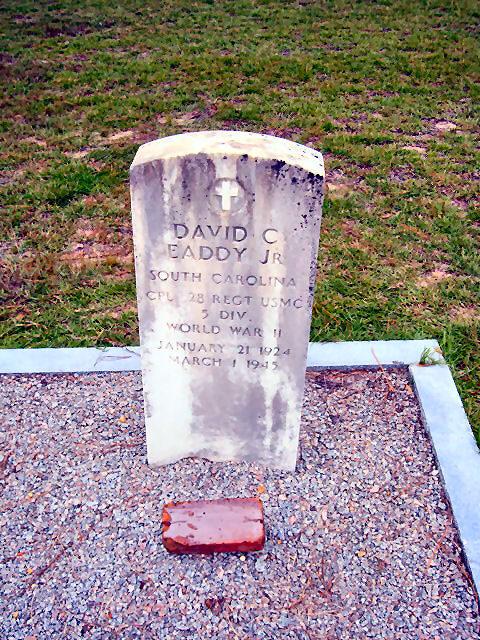 Vignette in The Echo written by Kelly Durham – The Last Class