1940
General Science
Attended Clemson College in 1937 and 1938. Graduated from NC State College in 1940
Mullins, SC
He was survived by his parents, Dr. and Mrs. D. S. Altman, Sr.; three sisters, Mrs. Claude Council and Mrs. Gary Edmond of Durham, NC, and Miss Rosemary Altman of Mullins; and two brothers, Berkley and Eugene Altman of Mullins.
Army Air Force, Second Lieutentant
320th Bomb Squadron, 90th Bomb Group
Air Medal, Purple Heart
Jun 21, 1919
Jan 9, 1943
His B-24 was shot down by Japanese fighters and crashed into the sea in the Southwest Pacific. Wounded but tried to save crew.
His remains were not recovered. He is memorialized in the Manila American Cemetery and Memorial. He is also memorialized in Cederdale Cemetery, Mullins, SC.
SE

Other: 2Lt Altman graduated from NC State College and an Atlanta Dental college.

Dayton S. Altman, Jr. was born in Mullins, South Carolina on June 21, 1919. He was the son of Dr. Dayton S. Altman, Sr and Rosa Witherspoon Altman.  According to records at Clemson University, Altman attended Clemson College in 1937 and 1938, then graduated from North Carolina State University, and then attended a dental college in Atlanta, Georgia.

His NARA enlistment record states he was residing in Marion, South Carolina when he was inducted into the service on July 23, 1940, at Fort Bragg, North Carolina. The record also shows he enlisted for the Medical Service and requested assigned to the Puerto Rican Department. In addition, it shows he had completed 3 years of college.

It is not known exactly when or where he transferred to the Air Corps, but family records show him as flying both a B-17 and B-24.  It is known he was assigned to the 320th Bomb Squadron of the 90th Bomb Group stationed at the time in Long Beach, California.

In October 1942, he was part of a flight of B-24s that flew to Hawaii and then moved to Iron Range, Australia where missions were flown against Japanese installations in the SouthWest Pacific.

On January 9, 1943, on such a mission, his aircraft was shot down by a Japanese fighter and crashed into the Southern Ocean. Reports state that although wounded, he attempted to save fellow crewmen.  There was, however, only one survivor.

Lt Altman and his fellow crew members are each memorialized on the Walls of the Missing at the Manila American Cemetery in Manila. In addition, there is a memorial marker for Lt Altman in Cedardale Cemetery in Mullins, South Carolina. 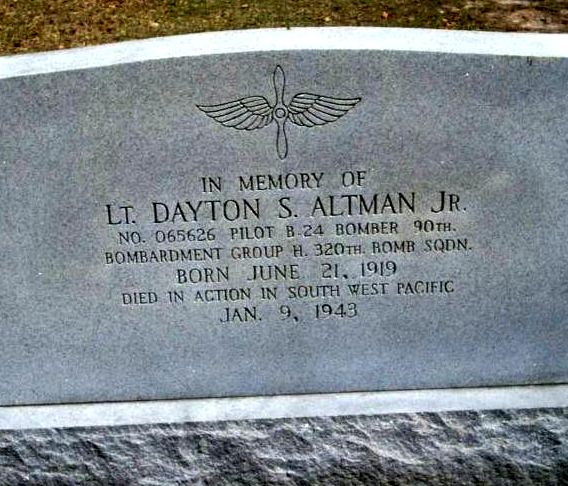 His body was not recovered, but he is Memoriaized at the Manila American Cemetery and Memorial. A memorial marker is also in Cedardale Cemetery, Mullins, SC.