Jan. 25, Three US Air Force fliers were plucked from life rafts by rescuers today in good condition but three others remained unaccounted for after two intercontinental jet bombers collided in darkness and crased in flames. The three were brought to the Naval Hospital at Key West where doctors said they suffered only from bruises and exposure.

Two B47s from homestead Air Force Base collided, exploded and fell into the water between Cuba and the Isle of Pines off Cuba’s southwest coast last night. They were on a refueling practice mission but a Homestead spokesman said the planes were not refueling at the time of the accident. The cause of the collision has not been announced. Brig. Gen. K. K. Compton, commander of the Homestead base 30 miles south of here, refused to let newsmen talk to the survivors.

Rescuer planes, joined by Coast Guard craft and units from the Cuban navy, were continuing to search. A spokesman fro the Cuban navy said the wreckage of one plane was found four miles from the little town of Santa Barbara on the Isle of Pines northern side. – Boston Herald [Boston, MA] Jan. 261957 – https://genealogytrails.com/scar/sumter/pageOFhonor.htm 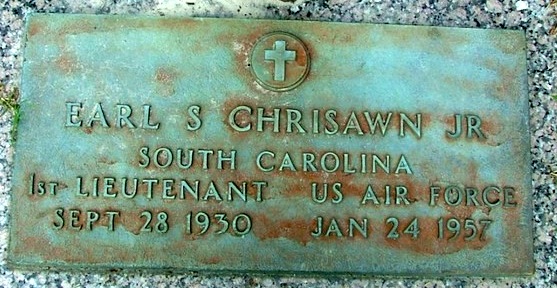