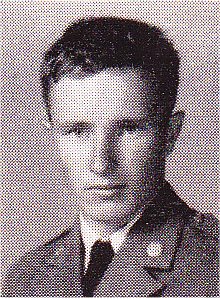 Point of Entry:
Forced south of intended point of entry after being fired on by flak from German coastal convoy and flew over heavily defended Rozenburg island.  Continued to target and subsequent fate.  As the first flight flew over the sand dunes a hail of 20mm flak hit the lead B26 piloted by Lt. Col. Robert W Stillman, killing Lt. Resweber, the copilot.  The plane snap rolled and crashed.  Three severely injured crewmen were dragged from the wreckage by the Germans.  A mile or two to the south the following flight also encountered heavy flak on landfall.  Lt. Garrambone, leading the second element, could not maintain control after being hit and crashed into the Maas river; he and three of his crew survived.  The surviving B26s headed between Delft and Rotterdam with Capt. Converse leading the first flight.  Near Bdegraven, while carrying out violent evasive action, Converse collided with Lt. Wolfe who was leading the second element.  Both B26s crashed in flames with only two survivors.  Lt. Wurst’s aircraft, severely damaged by debris from the Â  two colliding aircraft, bellylanded his unmanageable B26 into a field at Meije.  All escaped although Sgt. Heski lost a foot.  Now only the third element of the leading flight remained.  Lt. F.H. Matthew, leading Lt. E.R. Norton and apparently lost, turned to join Lt. Col. Purinton’s flight, but Purinton too had no idea where he was.  Forty five miles into Holland he decided to turn for home and his navigator, Lt. Jefferis, gave him a course of 2700.  Almost simultaneously Jefferis reported that he had sighted the target.  Bombs were dropped on what they thought the the Haarlem works, but it was in fact a gas holder in the suburbs of Amsterdam.  Having climbed to bombing altitude, several Marauders failed to reduce height as they headed for the coast.  Unknown to the crews they were heading directly towards Ijmuiden and its murderous flak barrage.  Purinton’s bomber was hit, but he managed to ditch offshore near a fishing boat, manned by Germans.  Jefferis was killed in the crash, but the rest of the crew were rescued to become prisoners of war.  The Ijmuiden flak also claimed the bombers of Lt. Jones and Lt. Norton.  One, with an engine on fire, turned back and crashed into the sea near Castricum, the other went into the sea a few miles west of Ijmuiden.  Tail gunner Longworth was the only survivor from Norton’s B26 and Lt. Alaimo from Jones.  Lt. Matthews and Capt. Crane had survived the Ijmuiden flak, and several miles apart headed for England.  At 1218 hrs Capt. Crane was shot down into the sea by Feldwebel Niederreichholz of II/JG1 and at 1230 hrs Lt. Matthews was shot down into the sea by Ober-Feldwebel Winkler of 4/JG1.  The only survivors of these two actions were S/Sgt. George W Williams and S/Sgt. Jesse H Lewis from Capt. Crane’s B26.  They were picked up from their rubber dinghy on 22 May 1943 by a Royal Navy vessel.

Lt. Edward Norton was pilot of one of the six bombers in the fast flight.  His brother flew as his co-pilot.  As they approached the target at Ijmuiden, The Netherlands, they meet heavy flak, which seriously damaged the aircraft.  Nevertheless, the B-26 completed its mission.  It turned toward home but went down in the North Sea.  The crew was listed as missing in action.  Sixty men from the aircraft on the mission failed to return.  One survivor eventually turned up as a prisoner of war.

On May 19, Dr. and Mrs. Norton received first one dreaded message and then a second.  “Missing in action.”  A pall fell over the whole town.  For months there was no further word.  Eventually Dr. Norton discovered that the bomber had gone down over the North Sea.  In September 1945 he learned from the mayor of Haarlem, The Netherlands, that the body of James washed ashore July 26, 1943.  He is buried in the military cemetery at Margraten, Holland.  His brother’s body was never found. Vignette in The Echo written by Kelly Durham – Side By Side