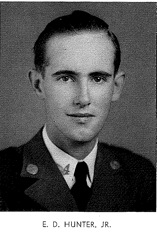 Hunter was a Staff Sergeant assigned as flight engineer on B-24 Liberator bomber #41-28773.  The aircraft, piloted by 1LT James Buchanan departed Waller Field, Trinidad, British West Indies, at 1009Z 1 March 1944.  The aircraft was on a ferry flight bound for Belem, Brazil.  After checking in with Atkinson radio on course at 1223Z, nothing further was heard from the flight.

A blimp-borne aerial search was conducted between Atkinson and Belem but nothing was found of the aircraft or crew.

Based on an AAF accident report 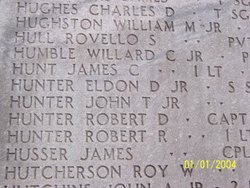 Lost – Vignette in The Echo written by Kelly Durham