"Captain McMurray was born November 16, 1943 in Charleston, South Carolina.  He was the only child of Fred and Lillian McMurray.  Upon graduation from Clemson University in 1966 he was commissioned Second Lieutenant in the Army.  He was ordered to Armor School at Fort Knox, Kentucky.  Fred was subsequently ordered to Fort Rucker for helicopter training.  Upon receiving his wings August 29, 1967, Fred was assigned to Armor Troop B, 1st Squadron, 9th Cavalry in Vietnam.

Shortly after Fred was declared Missing in Action (MIA), Nancy McMurray was appointed South Carolina Coordinator for the National League of Families of the American Prisoners of War and Missing in Action in Southeast Asia.  Nancy was also Co-founder of “I Care, Inc.” in Charleston, SC, which was established to inform the public of the plight of the M.I.A and P.O.W in Southeast Asia.  As part of this effort, Nancy McMurray, along with Fred’s mother, met with the United Nations, traveled to Paris and Geneva with other family members, had numerous TV and radio interviews, and spoke to all types of organizations with the goal of "not letting our men be forgotten."

Through the efforts of the aforementioned organizations as well as South Carolina volunteers, over one million letters were generated for delivery by Governor John C. West and Mrs. West to the North Vietnamese delegation in Paris.

Continuing effort is being made to account for the Missing in Action in Southeast Asia. Since 1973, the remains of over 400 Americans have been returned and identified. Captain Fred H. McMurray, Jr. remains among the over 1,700 Americans who remain unaccounted for in Vietnam. In 2009, a Department of Defense search team was assigned to the crash site of Captain McMurray.  After an extensive search, no evidence was uncovered of the helicopter or the remains of Captain McMurray.

Fred H. McMurray, Sr. and Lillian McMurray are deceased.  It was their wish that the Department of Defense continue to fund and maintain the effort to locate all those Americans missing or unaccounted from all wars.  Nancy continues to remain active by attending meetings and supporting the efforts of accounting for our missing Americans."

"I was in the Class of 68 and was active in the PR's 64-67.  I did not know Fred very well in that he graduated my sophomore year.  He was well above us in the food chain of ROTC.  However, I do remember when it was announced that he had been shot down.  As we all anticipated going to VN at some point, Fred's death generated several emotions in those of us about to graduate.  First, there was anger, vengeance, and needs for retribution; followed by uncertainty, trepidation, and hesitation caused by the fear of the unknown.

We thought surely there would be follow-up information about his rescue.  But as the weeks went by - nothing.  Then as we all went our separate ways, many to various types of active duty training enroute to VN, our own thoughts about Fred began to fade.  As we "'bumped into each other" along the way, news would spread from one to another that there was no "new news" about Fred.  Then eventually there was the news about the declaration of his ultimate status.  The realities of war became very apparent to us early on!!"

"I first met Fred around 1955-57 at MYF at John Wesley Methodist Church in Charleston.  He was very active in the church all his life.  We were also bonded by being in the same Boy Scout troop and spent many years camping and getting into Boy Scout mischief. He was always the role model for me as he was 2 years older and 2 years ahead of me in school.  We went through being camp counselors together as well as going thru Order of the Arrow.  He went to Porter Military Academy and finished in ’61.  There he was very active in sports and was high up in the chain of command his senior year.  He actually might have been the cadre commander or XO.  He went on to Clemson and got heavily involved in Pershing Rifles.  If you are good enough you get selected for a staff position your junior year.  He was selected XO.  I just had to follow in his footsteps and joined PR’s as a freshman.  He thoroughly enjoyed giving his ol’ Charleston buddy a ration of stuff the entire year.  Fred was selected to be in highest military fraternity at Clemson, Scabbard and Blade, his senior year.  He graduated DMG and took a RA commission in the Army.  In the Army he wanted to go to fixed wing flight school but something prevented that and he went rotor wing.  After flight school, he went to Nam and I think you know the rest of the story.  He met Nancy while in his Jr. or Sr. year and they were married after he got out of school.  We had a great time and got into a lot of mischief, but never any trouble, just boy stuff. You know what I mean."

Citation to Accompany the Silver Star Medal awarded to Fred H. McMurray by direction of the President, under the provisions of the Act of Congress, approved 9 July 1918, for gallantry in action while engaged in military operations involving conflict with an armed hostile force in the Republic of Vietnam:

First Lieutenant McMurray distinguished himself by exceptionally valorous action on 10 March 1968, while serving as a pilot of an armed observation helicopter during a reconnaissance mission in Phong Dein, Republic of Vietnam.  Upon detecting large enemy concentrations, Lieutenant McMurray, disregarding his own safety, exposed himself to the hostile ground fire as he hovered his aircraft over enemy positions, enabling the observer to successfully engage the hostile force.  Disregarding his own safety, he maneuvered over the enemy, placing suppressive fire and marking the positions for friendly ground troops.  His courageous action inflicted numerous casualties on the enemy force and contributed greatly to the successful completion of the ground element’s mission.  Lieutenant McMurray’s gallant action was in keeping with the highest traditions of the military service, and reflects great credit upon himself, his unit, and the United States Army.

Citation to Accompany the Distinguished Flying Cross awarded to Fred H. McMurray by direction of the President, under the provisions of the Act of Congress, approved 2 July 1926, for heroism while participating in aerial flight evidenced by voluntary action above and beyond the call of duty in the Republic of Vietnam.  First Lieutenant McMurray distinguished himself by exceptionally valorous action on 31 January 1968, while serving as a pilot of an armed helicopter, during a reconnaissance mission in the Republic of Vietnam.  While flying at low altitude over enemy controlled terrain, First Lieutenant McMurray observed and engaged a large and well entrenched enemy force.  During the action First Lieutenant McMurray made numerous passes over the insurgent’s positions and placed a large volume of effective suppressive fire against them.  Disregarding his own safety, First Lieutenant McMurray braved the intense ground fire and neutralized the insurgent’s fighting ability and contributed greatly to the successful completion of his unit’s mission.  His outstanding flying ability and devotion to duty are in keeping with the highest traditions of the military service, and reflects great credit upon himself, his unit, and the United States Army.

Captain McMurray’s remains were not recovered.  His name is inscribed on the Courts of the Missing at the Honolulu Memorial, National Memorial Cemetery of the Pacific, Honolulu, Oahu, Hawaii.  Details of Death: Missing in Action/Died While Missing. On April 7, 1968, Captain McMurray was piloting a Bell Sioux Observation Helicopter (OH-13S) on a reconnaissance mission in support of an operation in the Au Shau Valley, Thua Thien Province, South Vietnam.  His aircraft was hit by enemy ground fire, began burning in flight, and crashed.  The Observer, badly burned, was recovered some distance from the burning wreckage.  At that time, efforts to recover Captain McMurray were thwarted by the intense heat of the burning aircraft. The following day a search team returned to the site, but could not find Captain McMurray or his remains.  However, one American boot print was seen, along with Captain McMurray’s chest protector and helmet.  A debriefing of returning P.O.W.’s following the Ceasefire Agreement of January 27, 1973 revealed no evidence of Captain McMurray being a P.O.W.  It is believed Captain McMurray was captured, but he was not repatriated and his remains have not been recovered.  A presumptive finding of death was issued on 13 November 1974 changing his status from missing in action to died while missing. 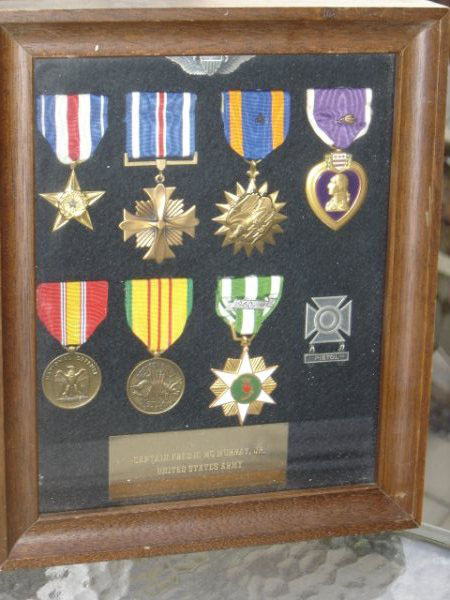 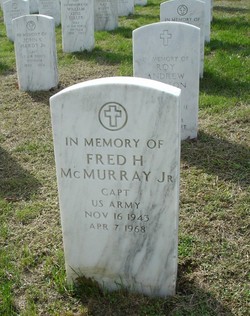