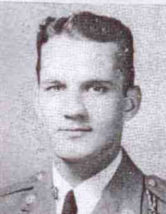 Narrative or eye witness statements:
2nd Lt. Brown took off with two other planes in formation from Sansapor, Indonesia to Morotal Island, Netherlands East Indies.  After unloading and eating lunch the pilots decided to not fly back to Morotal in formation.  Lt. Brown’s plane took off at 1800 and was never seen again.  A careful search was conducted on and around the islands for 2 days with no trace of the plane found.

Having actually gone “Missing” on the above date, Lieutenant Brown was not officially declared dead by the military until July 7, 1946.