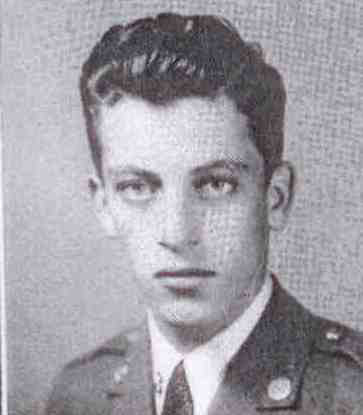 Summary Missing Air Crew Report #367, A/C SN 42-50897 – 1LT Safy was assigned to the 847th Bomb Squadron of the 489th Bomb Group based at Halesworth in Suffolk County, England.  On 9 September 1944, Safy was assigned as the pilot navigator of the lead B-24 #42-50897 on a strategic bombing mission over Mainz, Germany.  The aircraft was piloted by Captain Thomas Plese and carried command pilot Major William Blum.  At approximately 1055 hours at an altitude of 22,100 feet, just as bombs were released, the aircraft was hit by anti-aircraft fire.  There was an explosion forward of the bomb bay and the entire rear part of the aircraft was broken off.  The forward section, in flames, went into a steep dive.  Although no parachutes were observed, some members of the crew escaped and were captured by the Germans.  Safy was not among them.

Extract from Charles Freudenthal’s book  ‘A History of the 489th’ where Joseph Safy is listed as Killed In Action.  He is also listed with the names of the crew he went down with on 9th September.

+++++”Only two 489th aircraft were scheduled this day, providing Pathfinder leads for the 448th Group, which led the 20th Wing in an attack against the Mainz marshaling yards.  The results were rated as Good, but intense and accurate flak in the target area caused the loss of Captain Thomas Plese and his lead crew, in 42-50897.  Six men, including Plese, were killed, and five were taken prisoner…….

“One of the survivors of the Plese crew, S/Sgt John Davis, recalled the day:  “The marshaling yards at Mainz meant little to me the morning of 9 September 1944.  This was to be my 24th or 25th mission over enemy territory, and I was looking ahead – only a few more to go and the combat tour would be finished.  We (Captain Plese’s crew) were leading the 448th Group and the 20th Wing.  Oddly enough we had started our tour with the 448th and came to the 489th after Pathfinder training.

“As we came in on the bomb run, the flak started bursting around us, and the plane rocked from the force of the explosions.  I remember looking up and seeing an angry black burst directly overhead.  The bursts seemed to be closer than usual, and directly in line with our flight path.  “Suddenly there was an explosion right on us, and our aircraft started down immediately.  It must have been a direct hit.  We were going straight down, because I could see the formation of planes that we had been leading passing overhead and I was on my back.  At that moment, I figured the end had come.  I didn’t know fear; only sadness.  As I saw the planes passing over it was like saying goodbye to everrything and everybody.  This was the end.  I felt sad that I wouldn’t be going back to England that day, and that I would never see my family again.  It’s amazing how calm one can be when certain death seems imminent.

“I have no recollection of what happened in the next few moments.  The one thing I know is that a certain calmness came over the plane.  Everything was unbelievably quiet and the aircraft had levelled off.  This was when the instinct for survival came to me.  That power in man is hard to believe, unless you have actually experienced it.

“My tail turret was turned at an angle, and when I tried the hydraulic controls I got no response.  I was trapped.  Desperately, I pushed against the fuselage of the plane, and somehow the turret turned to where I could open the door.  I tumbled out forgetting to unfasten my oxygen hose and the various other connections.  What hadn’t pulled loose I hastily unfastened, then turned around.  I couldn’t believe my eyes.  Where Joe Holmes’ radio operator’s station and the bomb bay were supposed to have been there was nothing but blue sky.  The plane had apparently been hit in the bomb bay, and the force of the explosion had broken her in half, I was in half an airplane!  “About then I spied our two waist gunners, Gabe Latsko and Dale Stensrud, sprawled out on the floor.  I took a quick glance out of the waist window to get an idea of our altitude.  I would guess we were around 7000 feet. I reached down and pulled their flak vests off, and as they started to struggle to their feet I saw their chest chutes lying on the floor in a pile of debris.  Sometimes I wonder what I would have done if I had found only one chute.  They got the chutes attached to their harnesses, and since I wore a back pack in the turret, we were all set to jump.

“Just for a second I thought about moving the debris that covered the excape hatch, but Dale had already started to make his move, so Gabe and I followed.  Though he appeared to be badly wounded, Dale simply walked off the jagged end of the plane and into space.  We never did see his chute open, and never saw him again.  He was eventually listed as “Killed in Action.”  I followed right after him, and Gabe came after me, and our chutes opened without any trouble.  We landed near the anti-aircraft batteries that had shot us down and were captured immediately by the troops who manned the guns.  “We spent all the rest of the war as prisoners, most of the time in Stalag Luft IV, in what is now Poland.  The last 85 days we were on the ‘death march’ from Poland to western Germany, where we were eventually freed by British troops in 1945.”

++++ A family member of Lt. Safy’s fellow crew members indicates that they learned that Safy may have been an exceptionally skilled navigator and received special training as a “Mickey” Radar operator. 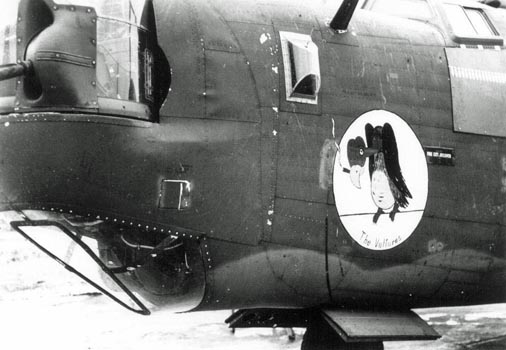 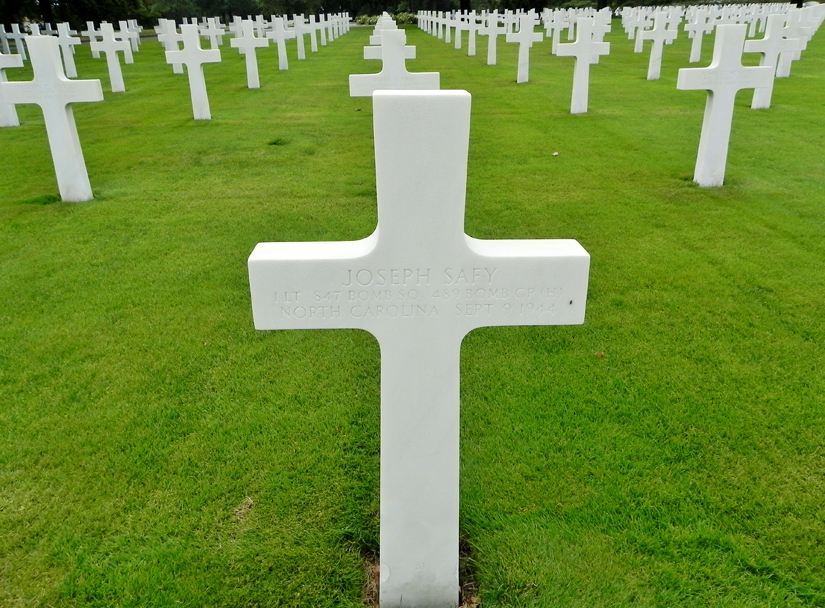 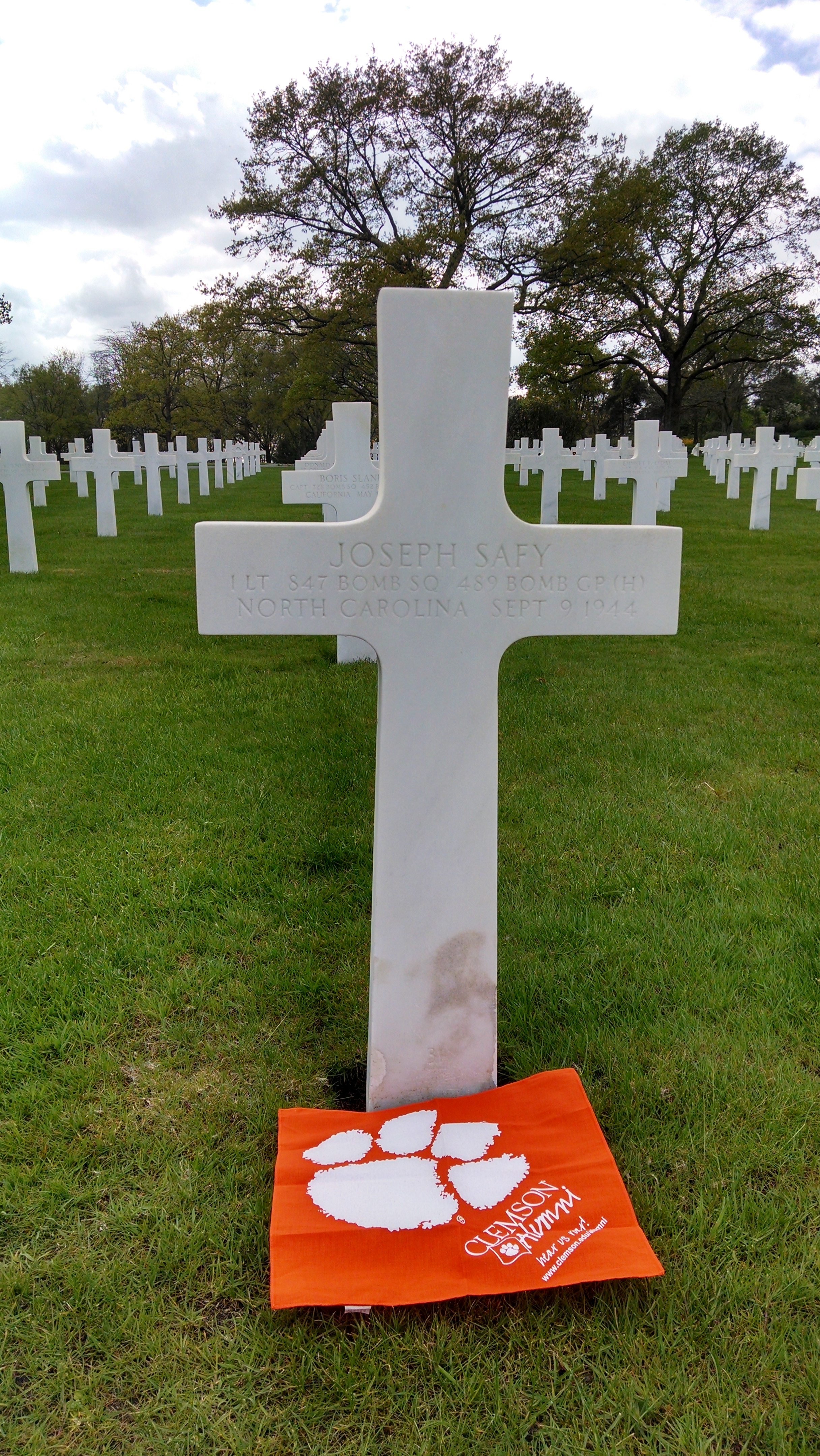