A niece, Barbara Wise Hash, of Clemson shared the following:

"Grady was born near Prosperity, SC, the youngest son of Ida Fulmer and George Lemuel Wise.  He attended O’Neal grammar school in Prosperity until his parents moved to Newberry.  After graduation from Bush River High School in 1939, he attended Clemson College until 1943 (the May 24, 1943 class was the last to graduate until the War was over).

Immediately following his graduation he was inducted into the U.S. Army at Fort Benning, GA.  At the time Grady was engaged to Geneva Wall of Prosperity.  After receiving his basic training there he was assigned in Dec. 1943 to Co. M. 422nd Infantry of the 106 Infantry Division at Fort Jackson, SC.  The 106th Division finished its training at Camp Atterbury, Indiana, shipped to England, October 19, 1944, and into Germany early in December.  Along with his entire Infantry Company he was taken a prisoner of war December 19, 1944, during the Battle of Ardennes.  A card from him dated January 9, 1945 was written from a German prison camp near Dresden, Germany.  Another dated January 21st was written from Stalag VIII A, fifty miles south of Dresden. He was reported by a fellow comrade to have died March 10, 1945 near Erfurt, Germany.

Copies of two cards received by the mother of Grady Wise Jr. during his time as a prisoner of war:

A young 14 year old girl Barbel, the daughter of a Lutheran minister, befriended my Uncle.  After his death as a POW from pneumonia, he was buried in Barbel’s church cemetery where her father was the minister (two years later his body was returned to the states for burial).  This young German girl would visit the grave site and place flowers on the grave.

During the WWII, I remember families truly supporting each other and exercising their Christian faith.  We sent care packages to her family in Germany. She writes: “Your soldier died here in the barn of a farmer as a prisoner.  I have seen him before he died, but shortly, because the prisoners were very much watched.”  A niece visited Barbel in 1992 after the Berlin Wall came down but just as the Unification of West Germany was beginning.  Barbel remembered the kindness of the Wise family members sending flour, sugar, meat and these care packages kept her family alive.  Her Christian family had taught her how to show compassion and love to complete strangers in need.  She felt a tie with our family because she recalled so clearly what had transpired with GL and knew he was from a Christian family."

This website has interesting first hand accounts of Sgt Wise's fellow fellow POWs that describe the conditions they lived under. https://www.indianamilitary.org/German%20PW%20Camps/SoThinkMenu/GermanPW-START.htm

Also, Cpl Meisner who also died as a POW is listed on this website. 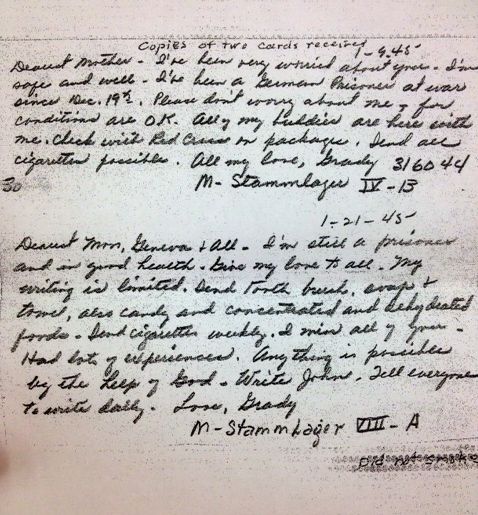 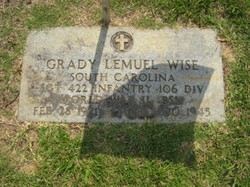