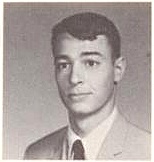 "Greg graduated from Clemson in 1968.  Greg participated in basic and advanced Army ROTC while at Clemson.  You might check the records from 1967 ROTC summer camp at Ft Bragg.  I believe he was the top cadet.  As a Distinguished Military Graduate, Greg was commissioned 2LT in the U.S. Army. He completed Infantry Basic and Advanced training and airborne training.  He might have completed Ranger training but I cannot say for sure.

Greg served in Vietnam (not sure of the dates) from late summer/early fall 1969 with the 1st Cavalry.  Greg was killed in action on Valentine Day, 1970.  Greg's purpose in life was to be an infantry officer; he died doing exactly what he wanted to do.  Greg comes from a military family; his father was killed during the Korean War.

While at Clemson, Greg was a member of the Pershing Rifles from 1964 through 1968.  Greg married Sherry McKee after graduation.  He and Sherry had a son. I think they named him Gregory.  Sherry is also a Clemson graduate.  She remarried some time afterward and I lost track of them.  Hopefully you have a way to contact her as an alumna."

"I know Greg Schoper like he was a brother.  We were classmates, serving in the PR's and ROTC for 4 years.  Back in the olden days, as my kids say, the PR's was like a fraternity - a military fraternity.  When you drill together from 5-7 AM, again from 4-6 PM, and then clean weapons and accomplish other tasks from  8-10 PM, you become very close.  We partied together, dined together, "bummed around" together, lied together, and occasionally we studied together.  We were truly a "Band of Brothers".  I also knew Sherry very well.  She was a year ahead of us, although she stayed for an extra year - I can't remember why other than to be with Greg and the others.  Check the '67 Taps - her real senior year.  She was a true scholar and a leader in many organizations.

I went to Greg's funeral.  He was buried in Arlington Cemetery.  All of us who were not currently in Viet Nam found a way to get to D.C. Greg was every bit a patriot as Jim Hudgens and the others who have remembered him (Mac Welch - '69, and Simms Anderson - '70) have reported."

"My first husband, Lt. Gregory C, Schoper, was killed in Vietnam on February 14, 1970. He graduated from the School of Parks and Recreation in December of 1968.  If you need further information you can contact me: Sherry McKee Falotico '67."

"Greg Schoper was a Junior in Army ROTC when I met him in January of 1967.  He took his preparation for membership in our nation’s armed forces seriously, serving as an officer in the Pershing Rifles (both the Company C-4 Drill Team and later the 4th Regimental Headquarters), and the prestigious military honor society, Scabbard and Blade.  He impressed me as a thoroughly professional cadet leader in every way, the virtual embodiment of Clemson’s fine military tradition.

While Greg was yet unborn, his father had been killed in the Second World War.  His widowed mother remarried another soldier, who made the Army his career.  Greg grew up in that military family, moving constantly from base to base in the nomadic manner of all military kids.  When he enrolled in Clemson, it became his home.

Greg’s time at Clemson, circa 1964-68, coincided with the period of the bloodiest fighting in our ten-year war in Indochina.  Like many of us, he believed that he was destined to fight in that war, but that national service was not so much an obligation of citizenship as it was a privilege.  That is what he told us underclassmen, and that is how he prepared himself for it, mentally and physically.

He was highly placed in the ROTC rank structure during his senior year.  With some embarrassment still, I remember how he stopped me on my way to my company’s formation on Tillman Field to chide me in a low, gentlemanly tone on my inattention to uniform dress: my socks were mismatched in color, one dark blue and the other black.  He smiled at my shocked apology and went on to his unit, and it is the benevolence of that correction which I will never forget.  I still double check the colors of my socks to this day.

Greg met a girl while at Clemson, a very bright young lady who, I believe, studied either mathematics or information systems, and who was recruited by IBM during her senior year.  She and Greg were married upon graduation, which I am quite sure was the summer of 1968, the year of Tet and Khe Sanh.  Greg was given a Regular Army commission and immediately went into Infantry training.  Within a number of months he was in action in South Vietnam.

While leading a night reconnaissance patrol back into lines occupied by our ARVN (Army of the Republic of Viet Nam) allies, Greg was mistakenly shot, mortally wounded by small arms fire.

Shortly after his death, I was told, his wife gave birth to a boy.

Lieutenant Greg Schoper richly deserves a place of honor in the pantheon of Clemson men who have given their lives in our country’s defense."

Greg Schoper Leadership Award – The College of Health, Education and Human Development at Clemson established the Greg Schoper Leadership Award to honor 1LT Gregory C. Schoper, a Parks, Recreation, and Tourism Management graduate killed in action in Vietnam.  The award recognizes the department’s most outstanding student leader of the year.  South Carolina Recreation and Park Association-Student Branch members choose the recipient, who must be a graduating senior or have graduated the previous December.

The following was taken from obituary articles printed in the Greenwood Index-Journal, Greenwood, SC on February 19, 1970, page 16, and February 25, 1970, page 5.  The articles were research and provided on 30 November 2009 by Ms. Yvonne Hudgens, Reference Librarian, Greenwood County Library, Greenwood, SC.

The family of Lt Gregory Schoper has been informed that he has been killed in action in Vietnam.  Funeral services for Lt Gregory Carlylle Schoper, who was killed Feb 14, will be conducted in Fort Myer Chapel and burial with full military honors will be in Arlington National Cemetery.

Lt Schoper was born at Fort Bragg, NC.  He was a graduate of American High School at Kaiserslautern, Germany, and a Distinguished Military Graduate of Clemson University.  He entered the US Army on Dec 19, 1968. 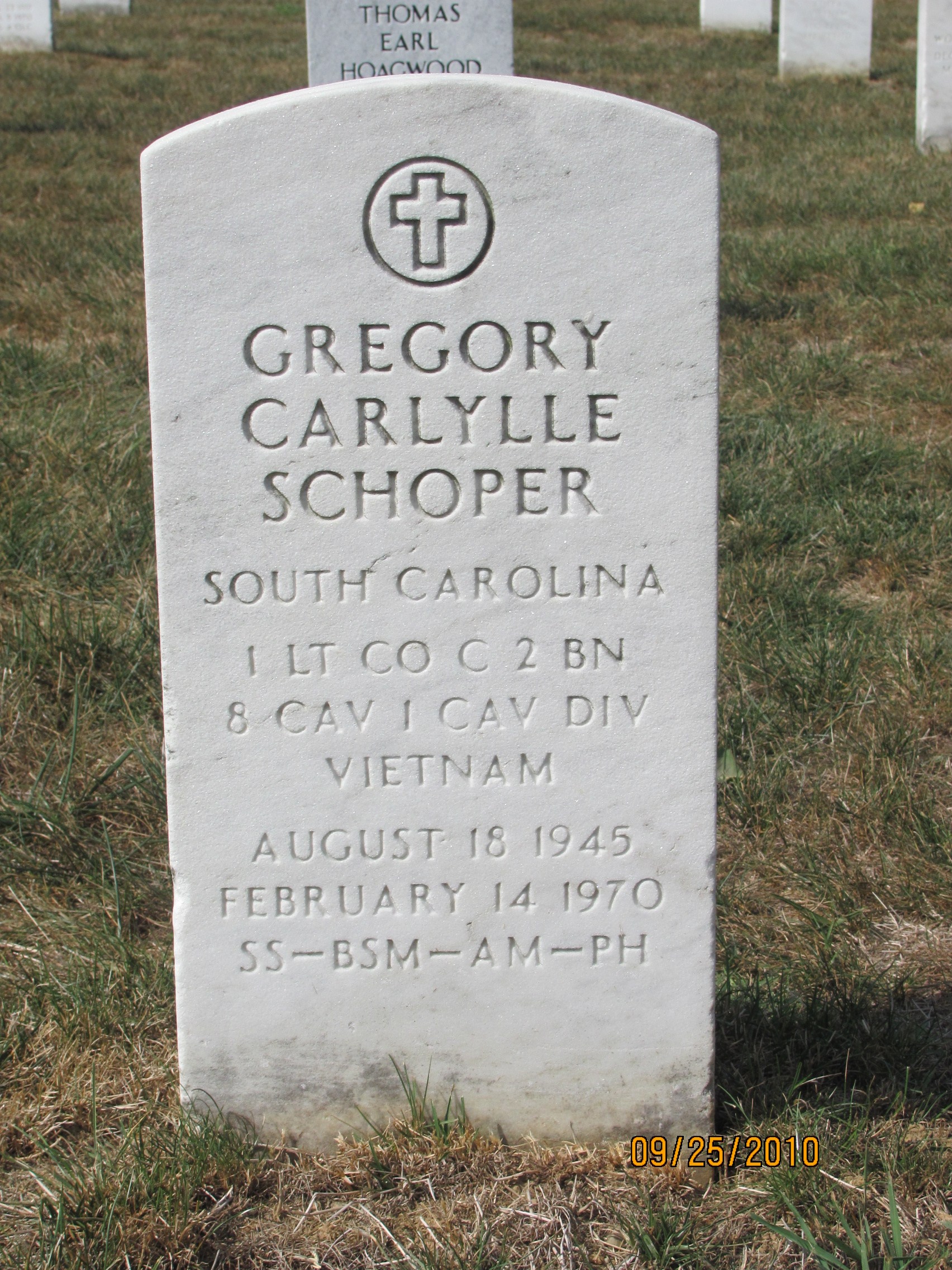