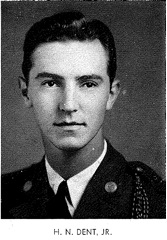 Hampton Nathaniel Dent, Jr. was born in St. Matthews, South Carolina on July 12, 1919.  He was the first of five sons of Mr. and Mrs. Hampton N Dent, Sr.  He graduated from St. Matthews High School in 1937, and then from Clemson College in 1941.  Being active in the ROTC unit there, he was commissioned a 2nd Lieutenant in the Infantry as he graduated.

He married Doris Wanda Newell in October, 1941.  They soon had a daughter.

In September 1943, he went overseas.  He was assigned to a troop carrier unit that towed gliders and dropped paratroopers.  He participated in the invasions of Sicily and Italy.

He was reported as killed in a plane crash in Sicily on October 24, 1943 by the War Department.  His body was returned to the U.S. and is buried in West End Cemetery in St. Matthews, South Carolina.
Copied from: https://airforce.togetherweserved.com/usaf/servlet/tws.webapp.WebApp?cmd=ShadowBoxProfile&type=Person&ID=157693 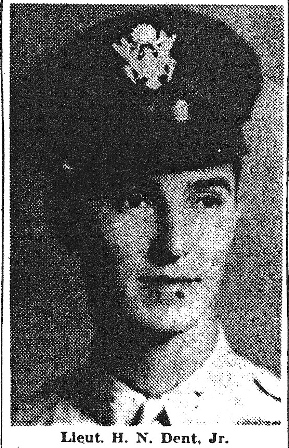 Vignette in The Echo written by Kelly Durham – First Son