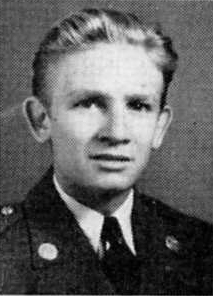 Capt. Hugh D. McPherson, Jr., 21, son of Mr. and Mrs. H. D. McPherson of Dillon, died in China on August 14th, according to an official telegram from the War Department received by his parents Sunday.

Capt. McPherson entered service on March 1, 1943, at Camp Croft. He was later transferred to Fort Benning and from there went to the South Pacific.  On January 12, 1944, he was flown over the Himalayan hump into China where he was liaison officer for the Chinese army at Salween Riverfront.  Later he was attached to the Chinese Combat Command where he stayed until his death.  During his service in China he was awarded the Bronze Star and Combat Infantry Badge.

Capt. McPherson was born in Charleston on December 7, 1923.  After attending local schools he entered Porter Military Academy from which he graduated in 1941.  In the fall of 1941 he entered Clemson College and remained there until he entered service in 1943.  He participated in athletics at both Porter and Clemson.

Mr. McPherson, his father, is local agent for the Seaboard Air Line Railroad, and his mother is affiliated with the local O.P.A. office.  He is also survived by one brother, Aviation Cadet Arthur C. McPherson, U.S. Navy Pre-Flight School, Iowa City, Ia., and several aunts and uncles.

A story featured in the News and Courier January 1, 1945, with a photograph of Capt. (then 1st lieutenant) McPherson and two other officers, was as follows:

“After service at Camp Croft, S.C., the lieutenant was ordered overseas, arriving in India October, 1943.  Four months later he flew across the Himalayan ‘Hump’ to China.

“He was assigned to Y-Force, the American military mission which trained, equipped and supplied the Chinese Expeditionary Force for the Salween campaign, first sustained Chinese offensive in seven years, which is clearing the Japs from western Yunnan in order that the Burma road supply line may be re-opened.

“McPherson, who was promoted to first lieutenant in May, was a member of a Y-Force liaison team which crossed the Salween when the campaign was launched early in May.  These Y-Force Americans accompany each attacking Chinese unit to render medical and other technical assistance and to advise the Chinese commanders.

“McPherson has been out in front in much of the fighting over the rugged mountain terrain in which the campaign has taken place.  For weeks, owing to the difficulties of supply imposed by the trackless mountains and the heavy monsoon rains, he lived on a steady diet of rice alone.  For his service in the field with the Y-Force, Lieut. McPherson is entitled to wear the Bronze Star on his Asiatic Campaign Ribbon.”

Last rites for Capt. Hugh D. McPherson, Jr., will be held at the home of his parents, Mr. and Mrs. H. D. McPherson tomorrow afternoon at 3 o’clock and re-interment will be in Riverside cemetery.

Hugh was born in Charleston and received his earliest education in the grammar schools of Meggetts, S.C., while his parents were living there.  He later attended Porter Military Academy in Charleston where he was graduated with honors and went to Clemson College where he was a student for a year and a half.  At Clemson he received his commission as Second Lieutenant and entered the armed forces.  He was first sent to the officers training camp at Camp Croft and later to the O. R. C. at Ft. Benning.  From Fort Benning he was sent to Calcutta, India, during the war, and was later flown over the hump into China to help train Chinese soldiers.  He fought with the Chinese through the Burma campaign and helped the Chinese open the Ledo Road from India to China.  At that time he was a liaison officer with a Chinese division and after opening the Ledo road the division came back and was sent to Toucnow to open the port of that city.  At that time Capt. McPherson was division commander and was attached to the Chinese 2nd army.

Capt. McPherson became ill and was put to bed by his physician but died eight days later of a liver ailment on August 14, 1945, which was V-J Day.  His death occurred at Poshan,China.

Honorary pallbearers will be composed of members of the Dillon Post, No. 32, American Legion, and a group from Porter Military Academy, headed by Major Ellett, Capt. McPherson’s former commandment at Porter.