The 82d Infantry Division was called to active duty on March 25, 1942, at Camp Claiborne, Louisiana, under the command of Major General Omar N. Bradley.  On August 15, 1942, the division took wings as the 82d Airborne-becoming the U.S. Army’s first airborne division-now commanded by Major General Mathew B. Ridgway.  At the same time, half of 82d Soldiers were used in the formation of a second airborne division – the “Screaming Eagles” of the 101st Airborne Division.

In the spring of 1943, the 82d All Americans became the first airborne division sent overseas landing in Casablanca, North Africa, on May 10, 1943.  From there, they moved by rail to Oujdaand then by truck to Kairouan, Tunisia.  That would be their departure point for the Division’s first combat drop – the invasion of Sicily. If the Sicily campaign proved how well the 82d Airborne could perform when things were awry, the Salerno proved the division could perform even better when external forces were cooperative.

By September 13, 1943, General Mark Clark’s Fifth Army had held tenaciously to the Salerno beachhead for four days but needed quick assistance.  He sent a message to Major General Ridgway requesting a drop that night.  A plan was immediately set for the 504th Parachute Infantry Regiment to jump several miles from Clark’s embattled troops, then be driven in trucks to the front lines.  Pathfinder teams would arrive first to mark the DZ.  In addition, ground troops would set ablaze cans filled with sand and gasoline, arranged in a “T” shape.  This time it all worked.  Except for one company that landed ten miles off target, all the paratroopers landed within 200 yards of the DZ.  No troopers or planes were lost in the jump, and no “friendly fire” was experienced.  It went just as smoothly the next night, when Colonel Gavin and 1,900 of his 505th All Americans, including 1LT Ivey K. Connell, arrived.  A day later, 14 September the beachhead was declared secure – a feat that could not have been attained without the 82d’s assistance.
_______________ ++++ _______________
On 5 October the battalion attacked at 0530 with D, E, F Companies a quarter mile north of Villa Literno. From that position patrols were sent out to determine if a river crossing was possible. D and E Company patrols reported that route was passable.
6 October 1943 – 0230 hrs  A platoon that was on patrol from F Company was sent out to capture prisoners to gather some information.  They were unsuccessful and returned to their CP.
0900 hrs  Another patrol was sent out into Arnone to seize and secure the village and with the exception of artillery fire, there was no resistance.
1430 hrs  1st PLT. E Company was committed north along the railroad to protect F Company’s left flank
1540 hrs  F Company reports enemy counter attacks.  Prisoners later volunteered information that one company was to attack the village from the west.  They were to be reinforced by a battalion which was to cross the river.  The balance of E Company was committed north along the railroad.
1600 hrs  1st PLT. E Company hit the enemy’s right flank along the railroad tracks in the vicinity of the railway station.  At the same time the platoon from F Company covering the company’s withdrawal strike back at the enemy crossing the river.  American artillery opens up all along the river and the enemy is stopped in its tracks.
1700 hrs  E and F Company withdraw to a road running east and west 1,000 yards south of Arnone and a defensive position is established.
1847 hrs  A Company 1st BN moves into E Company’s former position on the canal.
It is on this day that 1st LT Ivy K. Connell was killed.  Our after action reports do not show any casualties on this day but reading the hour by hour situation it could very easily been in one of these actions.

With Salernosecure, General Ridgway led his division, with other 5th Army units, on the key seaport of Naples.  There the 82d troopers enjoyed the experience of liberating that famous city.  In November, after sharp fight in mountains around Naples, the 82d withdrew to England to prepare for the invasion of France.  General Clark kept the 504th PIR in Italy where they fought at Anzio, returning to the 82d in April 1944.  It was at Anzio that the 504th earned its famous nickname “Devils in Baggy Pants.”
With Italy in good hands, Allied eyes focused on France.  Operation “Overlord,” the invasion of Normandy, would be the greatest military operation in history.  The massive plans for D-Day included Operation “Neptune,” an all-important airborne phase of Overlord.  Ridgway’s All Americans would play an integral part in Neptune.  It was in this operation that three members of Clemson participated and were casualties. They were PVT Henry M. Taylor HQ Battery 320th Glider Field Artillery (GFA), 1LT Thomas E. Goodson G Company 401st Glider Infantry Regiment (GIR).  1LT Goodson was also the Company Executive Officer.  The 401st GIR was part of the 3d BN 325 GIR; it would not be renamed as 3/325th GIR until later.  And 1LT William S. Gaillard I Company 505th Parachute Infantry Regiment (PIR).  He was the 2d Platoon Leader. 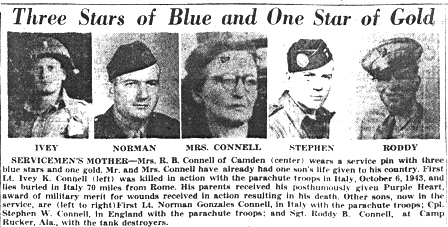 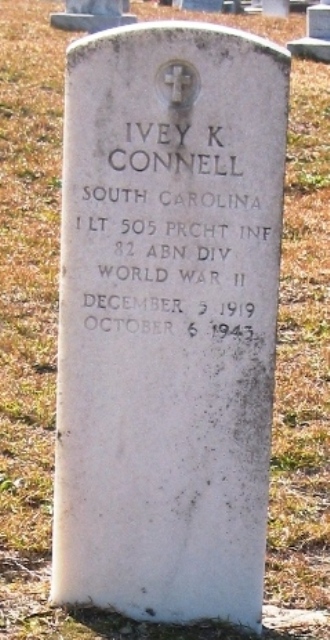