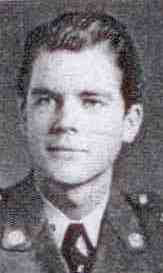 The Danes do not forget

83rd Fighter Squadron pilot, Lt. Hubert Bill Davis (center) is pictured with other members of the 83rd Fighter Group.  On March 11, Davis was on a mission to Hamburg when he was ordered to escort back to base another 83rd FS pilot (Lt. Jack Hodge) who had a leak in the coolant system.  The two set course for England, but Hodge decided he wouldn't make it that far and turned north towards Sweden.  His plane crashed over Starup, Denmark.  He was taken care of by local people but succumbed to his wounds shortly after.  The locals negotiated with the Wehrmacht and were given permission to give Hodge a Christian funeral in Starup cemetery.
By BRETT McLAUGHLIN

Jack Hodge was a typical American boy.  He and Albert Henry first met when Hodge moved to Clemson, and they attended the same school.  Hodge's uncle was a teacher in Clemson, and the newcomer had no trouble settling in, making friends and impressing the girls.  By his senior year, he was voted handsomest boy in the class.

Henry remembers his friendship with Hodge and how, after mhigh school, they both enrolled at Clemson University.  Henry would finish.  His friend would not.  Having been a boy in the depression and a teenager at the beginning of World War II, Jack was an idealist, Henry remembered.  He was mature and serious-minded, if not a little melancholy.  The world did plunge into war and Jack, like many others, wanted to serve his country and mankind.  He dropped out of Clemson and joined the Army Air Forces.

The inhabitants of Starup, a rural hamlet in southern Denmark, about 40 miles from the North Sea, have a special kindred feeling of both sympathy and gratitude for Americans.  These feelings are rooted in the events of a single day as the war drew to a close.  First Lt. Jack D. Hodge, 23, having achieved an exemplary record in the U. S. Army Air Forces, was killed in action over Starup, Denmark, on March 11, 1945.  As his fighter plane spun out of the sky, victimized by a coolant leak, Hodge bailed out.  His chute became caught on the wing and he went down with the plane, critically wounded.  Local journalist Catherine Olsen would chronicle and later share with Hodge's uncle the events of the next two days, days that changed Starup forever.

Excerpts of her story, passed on to Hodge's old friend Albert Henry, are as follows: Many people went out to the place of the accident where the fighter plane lay, a burned wreck.  Monday, Jack D. Hodge was laid in a coffin.  Pastor Gamborg Andersen provided the necessary (arrangements). The parachute was spread over the inside of the coffin and the young airman lay there in his uniform with a peaceful and beautiful expression on his face.  The followers sang (Always Cheerful Where You Are Going), which was the famed underground rally song during the war.  The priest said The Lord's Prayer after which the coffin was carried into the church and stood on a black cloth with silver edges.  In the church yard a grave had been chosen for the young airman, lying in the open, facing west and here he was put to rest on 13 March.  The 13 March arrived with lovely weather.  From early in the morning, wreaths, decorations and flowers were sent from all who wished to honour our young friend who had fallen in the cause of freedom and in our cause.  Never has such a large following been seen in Starup church.  The funeral service was to be at 2 pm, but long before that the seats and standing room were taken and people stood all the way to the Armoury.

After the hymn How Wonderful It Is To go to the Sweet Harbor of Heaven,Pastor Andersen preached a beautiful and moving sermon in memory of the young airman.  He said amongst other things: Let us also look at the coming spring, the song of the larks, the fresh shoots, the buds, which are coming out.  This is how the Disciples thought and, instead, Jesus spoke of death.  Many spirits will be destroyed and become earth again.  Many migrating birds will not return.  As it is in nature, so it is in the world.  Many die and we become indifferent.  The spring reminds our Lord of death; today death strikes the young and healthy people.

Let us as Danes and Christians bow our knee to the majesty of death.  We are doing so today when this young stranger is lying here; we only know his name, but we know that he comes from a friendly nation.  May this young man's death bear fruit.  He did his duty; may he bring the good in our people to resurrection.  This is the first time that the result of this has been swept into our parish and we ask God that it will be the last. Let us remember that we may also be called upon to do our duty and hold our young friend name and memory in high esteem and honour.

Less than two months later, on May 7, Germany would surrender to Allied Forces in Western Europe.  The war end was at hand, but the Danes would never forget.

Albert Henry of Clemson contributed to this story.

At approximately 1330 hours Lt. Hodge, flying Cargo Black 3 position, called Black leader to say he had a leak in his coolant system.  He was told to leave the squadron and head out.  I was assigned as escort.  Cargo Squadron was at the time just south of Herning on the Danish Peninsula at about 7,000 feet.  I asked him if he wanted to go to Sweden or England.  He said he would try to make England.  We took up a heading of 220 degrees in order to stay in close to shore over the North Sea, and had nearly reached the west coast of Denmark when Lt. Hodge said he would be unable to make it, and was going to head for Sweden.  We turned to a course of 90 degrees.  By this time his engine was running very roughly with a great deal of smoke coming out of the exhausts.  He was unable to maintain altitude, and at the end of about ten minutes we were down to 3,000 feet.  He said he was going to bail out, and asked me if he was over land.  Carg0 Red leader told him to take up a heading of 270 degrees and stay with the plane as long as he could.  By the time he had turned to a west heading he was down to 2,000 feet and going into the clouds  I told him to bail out rather than go down through the overcast, but he did not answer.  I let down on a heading of 270 degrees at the same place he had entered the clouds, and broke through at 800 feet just west of Vejle.  It was raining and the visibility was bad.  I was unable to see any sign of the plane.  From the time he first reported having trouble his plane stayed airborne between 15 and 20 minutes.

Last Known Activity:
Jack Dupree Hodge was born on March 20, 1921 in Alcolu, South Carolina.  After he graduated from high school, he moved to Clemson and enrolled in the electrical engineering program in 1940.  After the war began, he was eager to join the military.  In late 1943, he dropped out of college and was selected for the aviation cadet program.

After completing basic and advanced flight training, he was commissioned and awarded his wings.  He then went on to receive training in single-engine fighter aircraft.  He deployed to England in late 1944, and was assigned to the 78th Fighter Group at Duxford, flying missions with the 83rd Fighter Squadron.

He had flown approximately 16 missions when, on March 11, 1945, he was participating in bomber escort duty on a raid on Hamburg, Germany.  As the escort crossed the Danish coast over Herning in the Jylland Peninsula, he reported to his wingman that his aircraft was losing coolant, and the engine was overheating.  He began a return flight to England, but soon decided to try for Sweden instead.

The engine began running rough, and Hodge could not maintain altitude.  His wingman encourage him to bail out, but Hodge stayed with the aircraft.  He entered an undercast at 3,000 feet, and his wingman lost sight of him.  Observers on the ground state he emerged from the undercast, trailing the aircraft.  It appears he bailed out, but his parachute fouled on the tail.  He was swept off by hitting a hedgerow just before the aircraft crashed near Oster Starup.

A doctor was called, but Hodge only lived about 20 minutes.  He was taken to Oster Starup Church, and the Wermacht notified.  They gave permission to hold a Christian funeral, and the Danes complied.  The coffin, covered with an American flag, was carried to the grave by members of the parish council.  Vicar S. Gambourg-Andersen performed the graveside service.

After the war, Hodge’s mother decided he should remain there, and donated a baptismal font to the church for their kindness.  On March 11, 2005, a memorial ceremony was held at the grave.  Wreaths were laid by the American Embassy, the Danish Home Guard, and the Oster Starup Parish Vestry.  Approximately 100 locals, as well as Lt. Hodge’s family, attended.  After the ceremony, the Home Guard Air Force Orchestra presented a concert in the church. https://airforce.togetherweserved.com/usaf/servlet/tws.webapp.WebApp?cmd=ShadowBoxProfile&type=Person&ID=151738 – From Together we Served Website 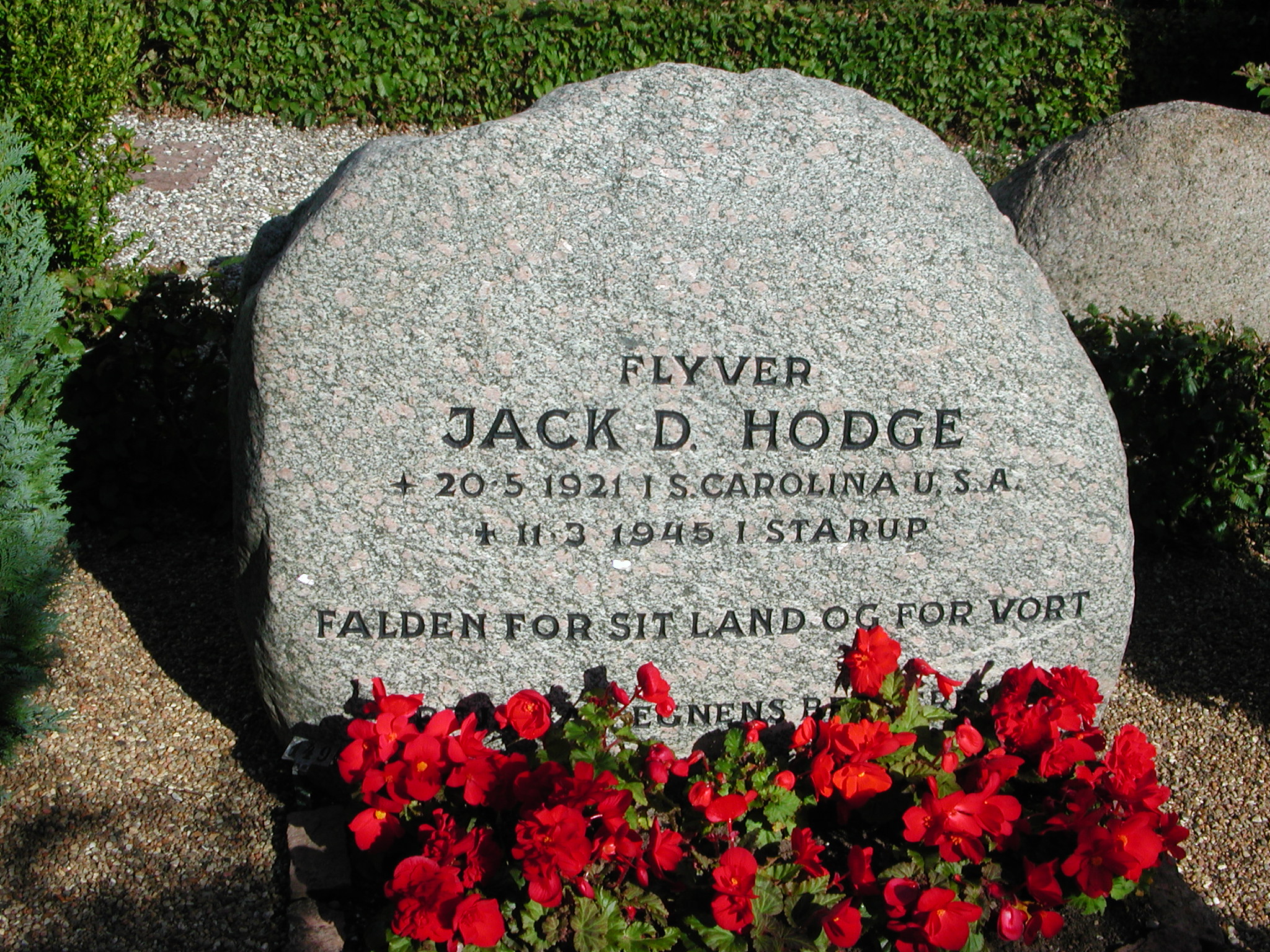 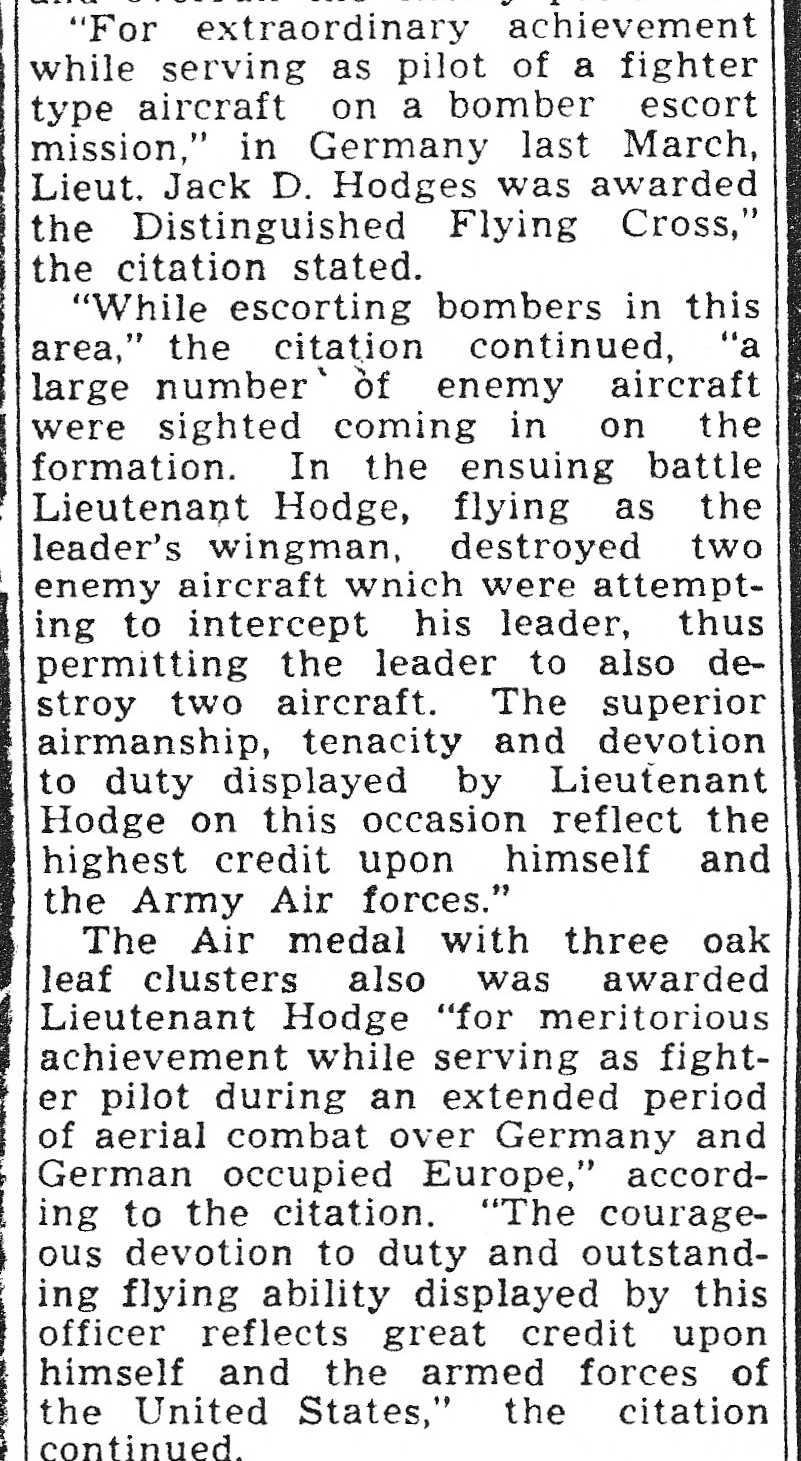 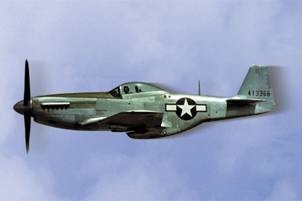 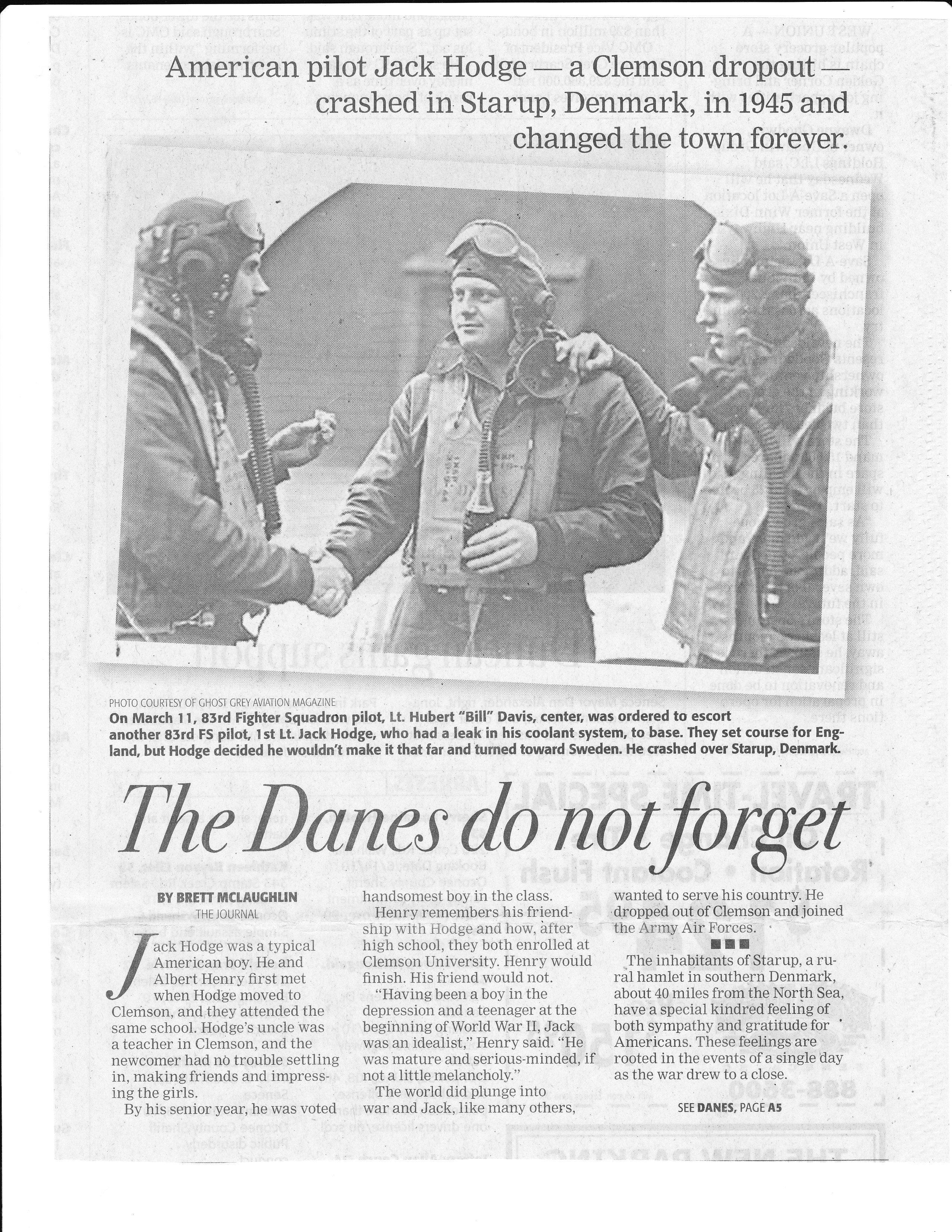 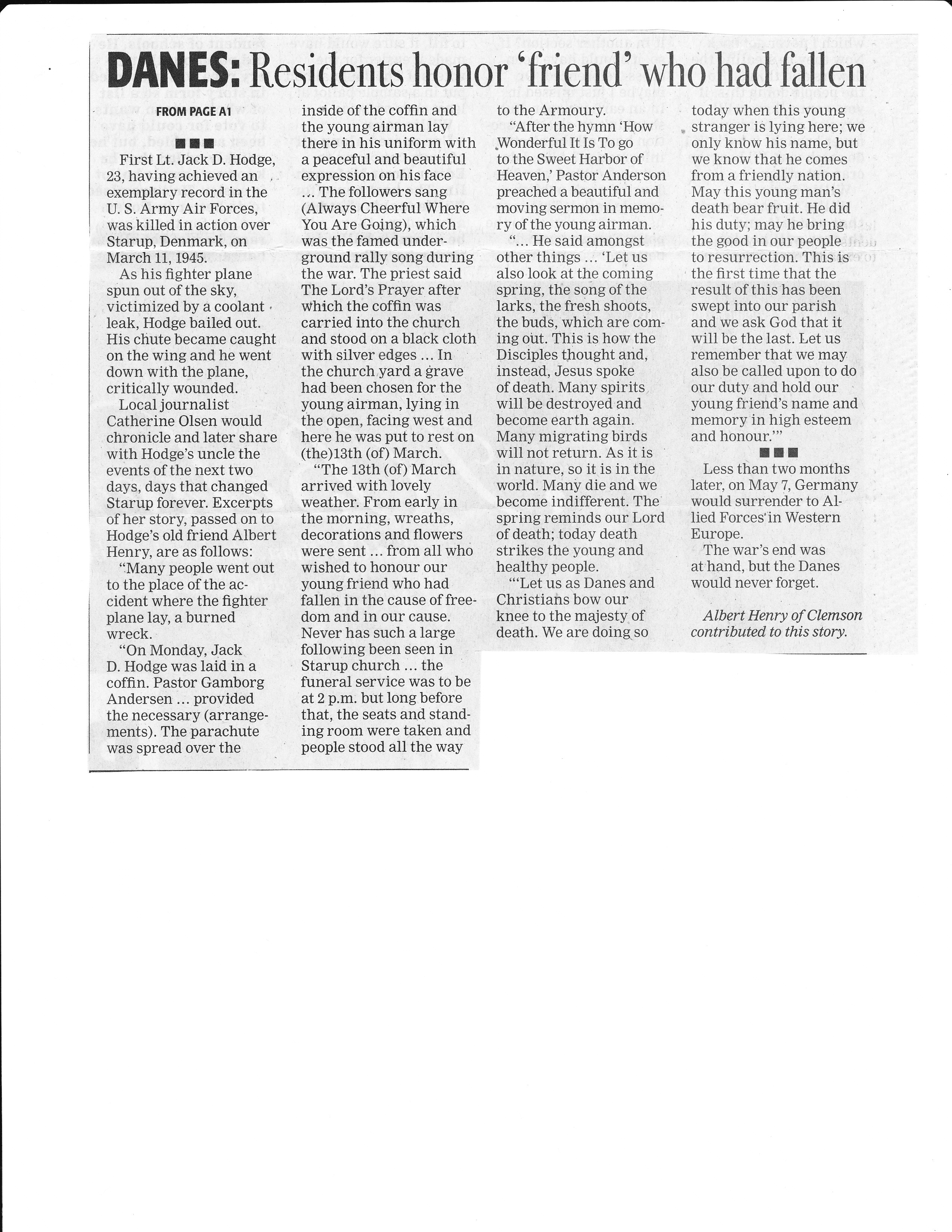 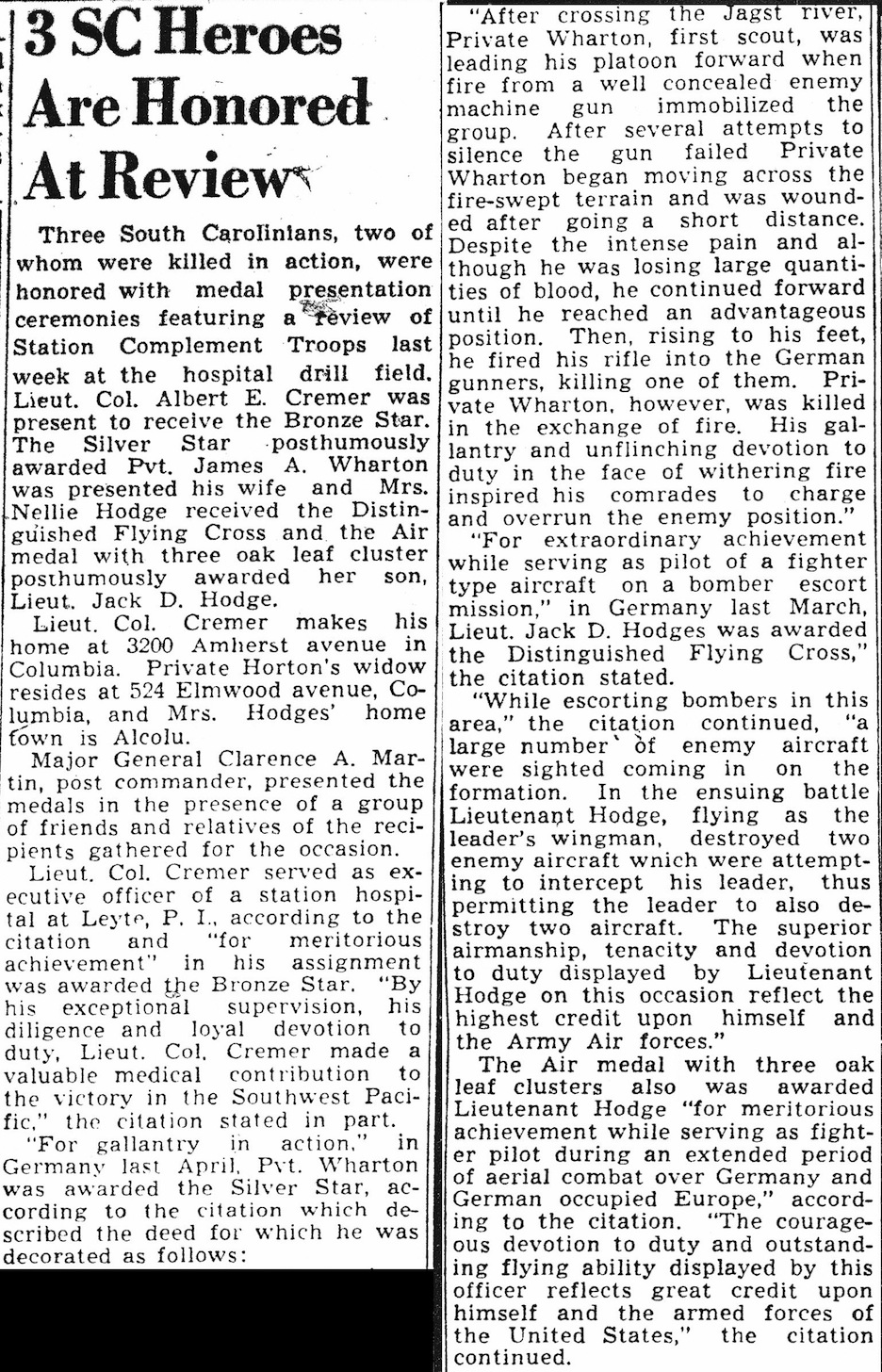 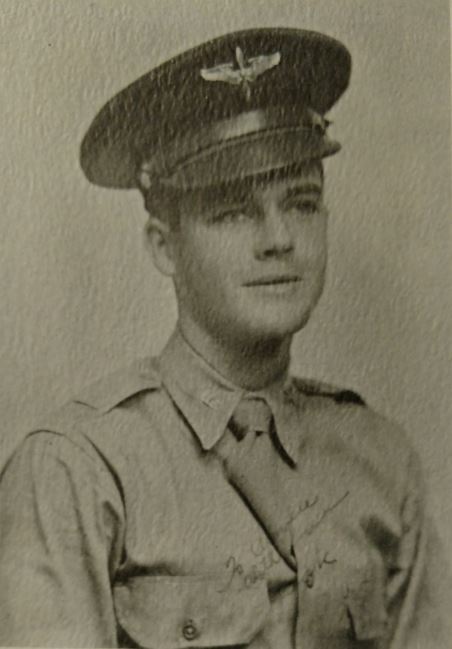