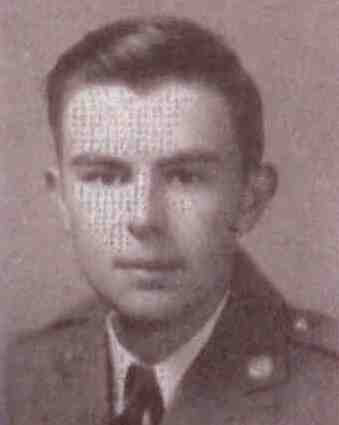 I am James Scott Winebrenner’s’ oldest niece.  Shortly after my 8th birthday, Oct. 1944, Jimmy shipped out for overseas duty.  My dad shipped out about that time as well.  I remember Jimmy stopping by our house to say goodbye.  I also remember a few months later, my grandmother being held on either side by my grandfather and his sister as Grandmother was helped from her first grade classroom after hearing the devastating news that her only son had been killed in Belgium.  Everyone forgot about me.  The only thing I could think that would cause my grandmother such grief was that something must have happened to my baby sister.  I just left school and walked home to make sure my new baby sister was alright. The baby sitter told me about my uncle.

Jimmy’s death was devastating for my grandparents and my grandmother spent many hours writing letters to the War Department, following every lead they gave her in an attempt to locate men who were with my uncle at the time of his death seeking some peace for their heart ache.  It was two years before she located the men and received letters from them.

Their mourning was so great that Jimmy was not spoken of often that I can recall.  He was their only son, the youngest of 3 surviving sisters.  He was a smart young man who attended Clemson on scholarships, one being a work scholarship.  He was a tour guide at the Calhoun Mansion and lived on the football barracks as a “go for” for the team, who protected him diligently from the hazing of upper classmen.  He was remembered by his high school classmates as being a soft spoken, slightly built young man with impeccable manners.

In doing my research for this project, I looked at some profiles of Clemson men in the class of 1944 and opened one for 2nd Lieutenant Frank Kennedy Bowman and instantly saw that he and my uncle were in the same outfit.  Lt. Bowman had joined the service about a year before Jimmy thus attaining the rank of 2nd Lieutenant.  Lt. Bowman is mentioned in two of the attached letters.  Sergeant George Thomas writes that he was with Lt. Bowman when he died on 1/15/45 and with Jimmy when he died on 1/25/45.  Here were two more Clemson classmates who fought side by side and lost their lives so that our nation would be preserved.

When my husband lost his Class of 1956 ring swimming in the surf at Jones Beach, NY, my grandmother gave him Jimmy’s Class of 1944 ring and Smith proudly wore it until he died.

This web site, pages 14 & 15 describes the action he was a part of when he was killed.

This web site is a Feb. 2013 video of the American Military Cemetery care by local Belgians.

In response to your letter that I received a couple of days ago, I will give you full details.  I have longed to know the addresses of a lot of the boys that were killed but I could not get them.

I was Jim’s Sergeant and we soldiered together for about a year and half.  He was a perfect soldier in any man’s army.  While we were fighting he feared nothing and did his job wonderfully.  Anytime he was to do anything he did it and was proud to do it.  All of the fellows liked him very much and easy to get along with.

Lt. Bowman was a real guy and Jim introduced him to me when they joined our outfit and he also was a real soldier.  I was with these two young men when they got killed.

The night that Jim got killed I was with him.  Here is the story:  One night about 10:00 in a wooded area I was picked to take a patrol into another town where the Germans were and to get information.  I asked for volunteers.  I had to have five besides myself.  Jim was the first one to step forward and the other four men step forward.  I gave the instructions to them and told them exactly what we were supposed to do.  We set out.  I was first to set out and the others followed.  Jim was last.  We were about 10 yards apart walking down the road single file.  It was a snowy and cold nite as we walked a few yards we would get down on the ground to see if we could hear anything moving then we would start out again.  We started to pass several houses and we would go through them to see if there were any Germans in the houses.  As we started out again we were approaching another house we were fired upon by two machine guns and as we crawled back to cover there were three of the fellows that were hit.  I didn’t know exactly which three they were.  Two of the other fellows and myself tried to get the fellows and then as I asked each fellow who he was they told me and we went to each one to give aid and found that all three of them were dead.  One of these was Jim.  He was shot through the head.  The rest of the company heard the firing and came to our aid and we killed the Germans that were in the house.  We returned back to the wooded area that night to our Captain to tell him what men were killed in action.  That is the way that your son was killed and I among the rest of the men knew how brave your son was, he was always willing to go with me.

To you and your husband you have my Deepest Sympathy and I only wished that he could live to tell you his experiences.  You have every right to be proud of your son. He was a brave soldier and backed away from nothing.  He gave his life for Our Country.  I Salute Him and His Mother and Dad.

I hope that you won’t be too nervous about reading this and I know just how you feel about your Son.  There was four of us in our family that was in and that was all they could get because that was all of the boys in our family.  Why I tell you I know how you feel, because while I was overseas I lost my Father and it was a shock to me.

I trust that you and your husband are in the best of health and please don’t worry to much.  Must close for now and to tell you civilian life is satisfactory and I am getting along swell.

I received your letter a few days ago, and I am very sorry I didn’t answer it sooner.  Yes, I knew your son, Jimmy, very well.  As you know I was with the 75th Division since it was activated at Fort Leonard Wood, Missouri, 1943.  Your son joined our division as a replacement in Kentucky at Camp Breckinridge.  He was assigned to the first platoon under Sgt. Thompson.  I didn’t get to know Jim for awhile but as time passes one company gets to be like one happy family where everybody gets to know every fellow in his outfit.

Your son, Jimmy, was really a fine, young man, well liked by everybody in the Company.  Lt. Bowman came in our outfit, Company “F”, about the same time Jim did.  I am going to give you the straight facts about your son without any exception, as a solider would like to be talked about.

In the states, as I knew Jimmy he was a real solider.  He was a smart boy without any doubt, but as most of us, were busy with a life of jitters not knowing what the future held for us in this great World War II.  Our training was very rugged.  As you know the Infantry is the toughest branch of the whole Army.

I guess we all were young and foolish looking for something new in interest as we did find in combat.  I remember the day our Division was alerted for shipment overseas and believe it or not we were happy to hear this news because we wanted to get in this greatest show of our life.

Jimmy was happy too, as we all were.  He was a cool boy and well liked by everybody in the Company.  I am not going to talk about his actions in England before we went into battle because I know he was honest and good all the way through.

Well, the big day finally did come and believe me we were all scared.  You see, we or I should say our Division the 75th, was thrown right in the biggest and most bloody battle of the war.  It was something weird for a green Division, but we had to at all costs.  As you know, your son paid for it in his blood as many thousands of other young lads did.  It was cold up in Belgium and the snow was deep.  We fought the Germans with all our might.  I remember Jim.  He was scared like all of us were.  I first can’t speak of him as an individual soldier for it is very hard especially in battle for every soldier is in a stat of his own.

I hate to tell you this but I am going to Mrs. Winebrenner for you just want to know how it happened.  Your son was killed on a patrol one night after we captured a town in Belgium from the Germans.  We were asked to send a patrol in the German lines to find out how strongly held their positions were.  Six men went on this patrol with the information from military headquarters that the town was not occupied by the Germans.  As our patrol reached the entrance of the town we were opened up on by German machine guns.  How we all didn’t get killed I don’t know but just as we were opened fire upon, we hit the ground hoping the cover of darkness would protect us.  We started to fire back as we were slowing going back to our own lines but as you know three of our boys were killed out of this six man patrol, your son, Jimmy being one of this three.

But we just didn’t pay with our blood because the next day we took the town and we found about fire Germans dead where we all fired at their positions.  Of course, we found Jimmy’s body which was very hard to recognize after being shot up by a machine gun all through his head and body.  I know he didn’t suffer, Mrs. Winebrenner because he was killed instantly.  We were all sick, but as you know war is war.

I know it is hard on you, but you wanted to know what was what and I know Jimmy would want it this way too.  God will take good care of him, so Mrs. Winebrenner you and thousands of other mothers that lost your sons bought the very greatest war of all by giving your own flesh and blood, so that victory was achieved.

If there is anything more you would like to know, Mrs. Winebrenner, just write and I will try to help you. 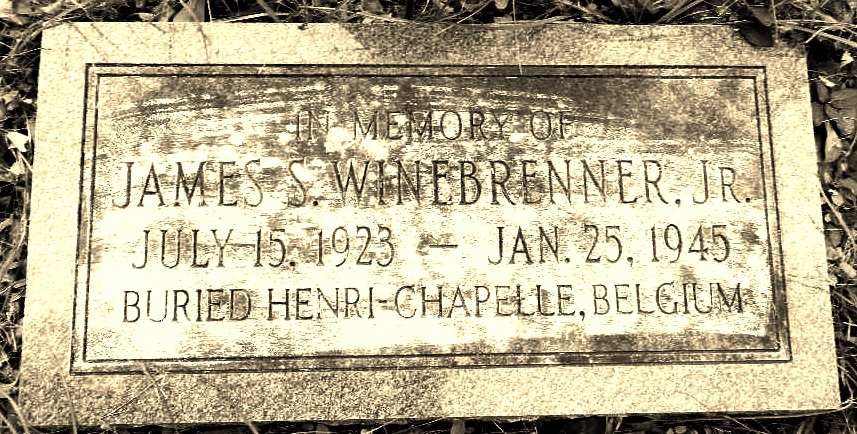 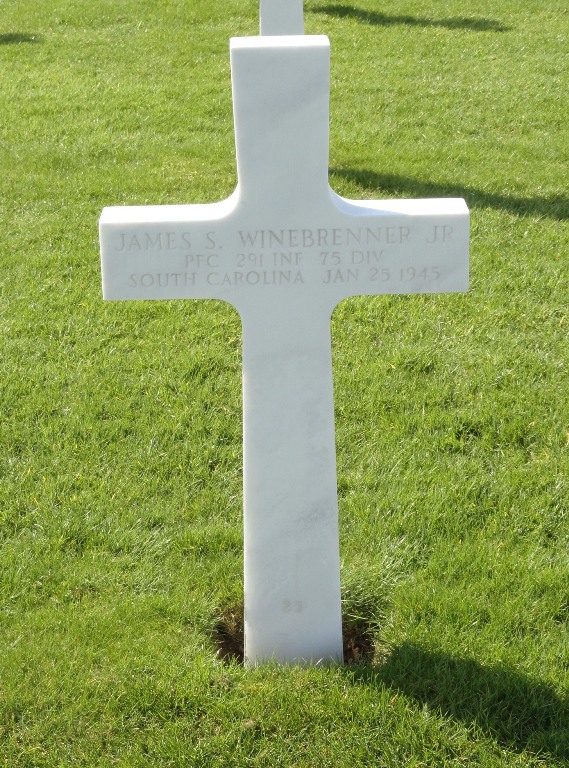 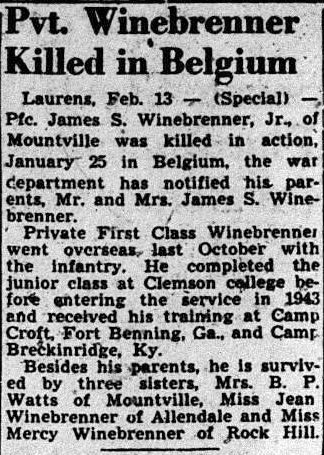 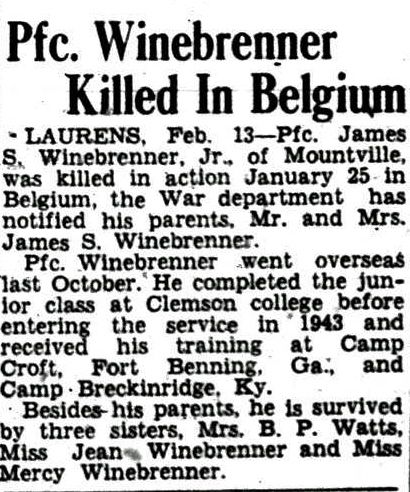 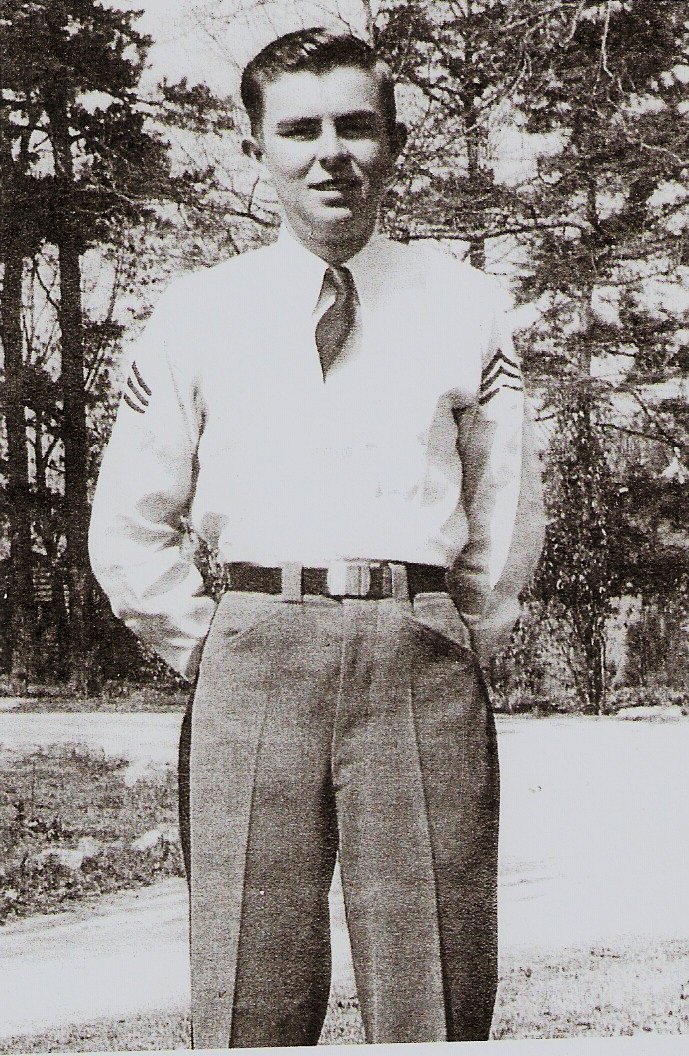 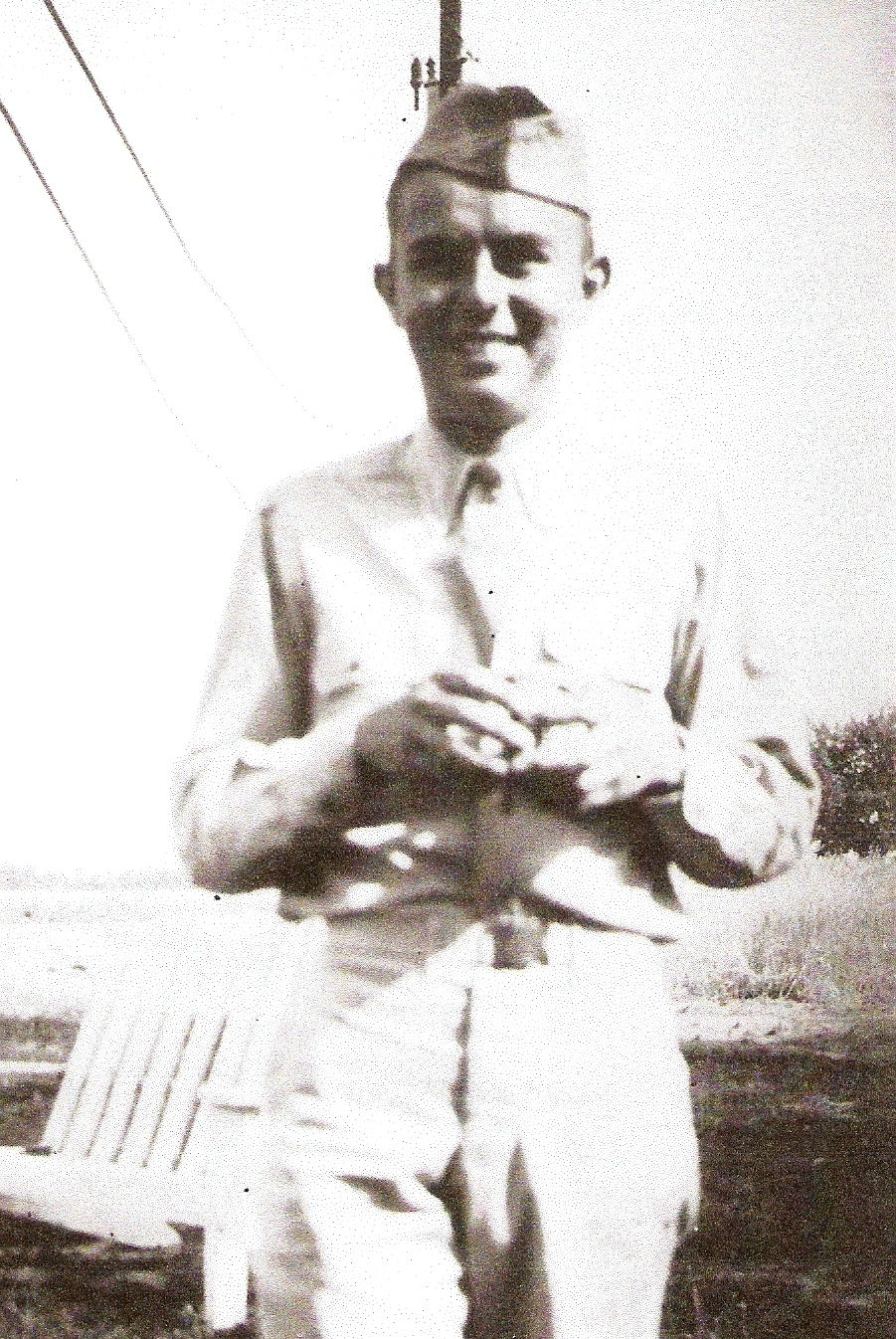 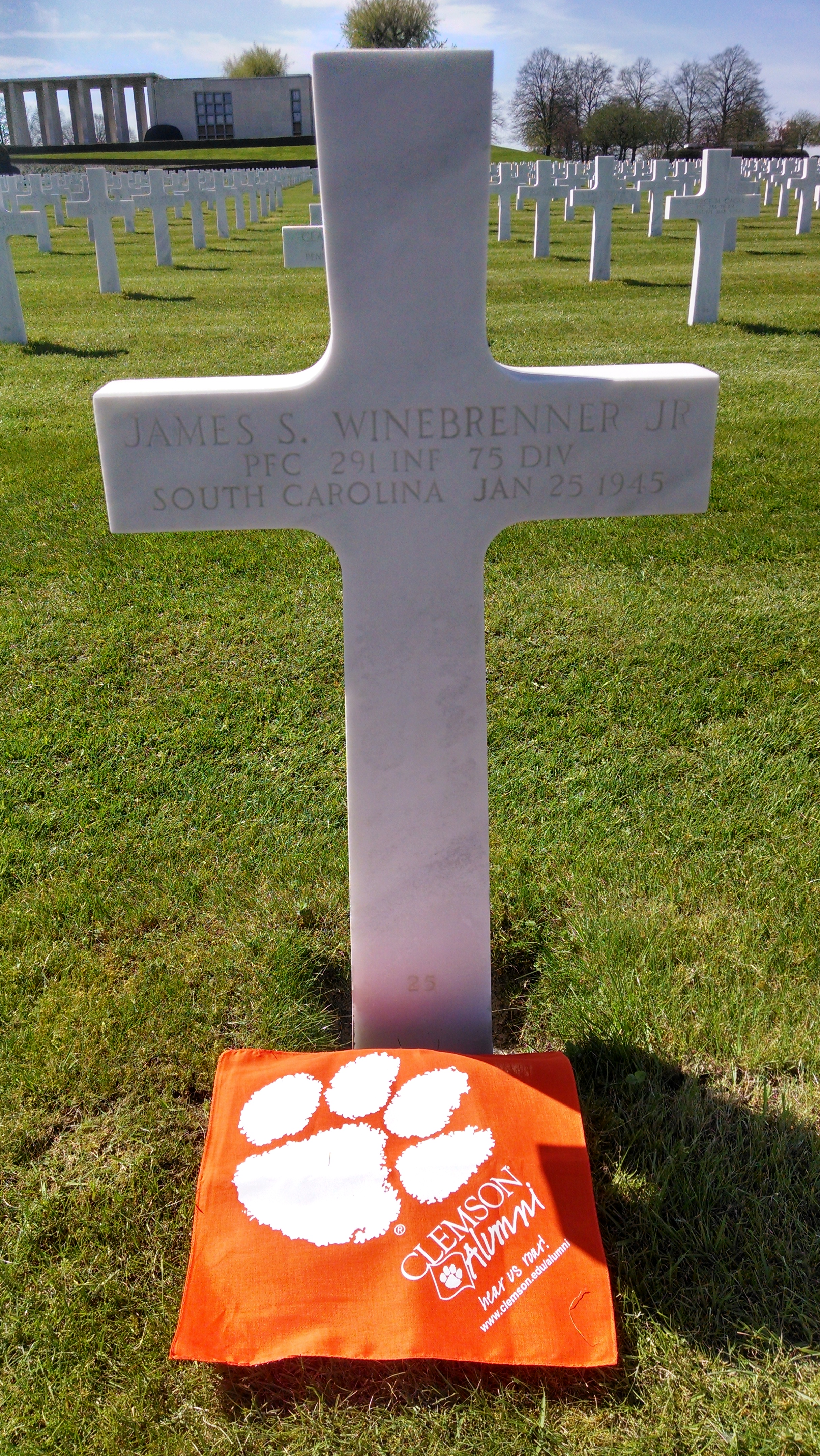