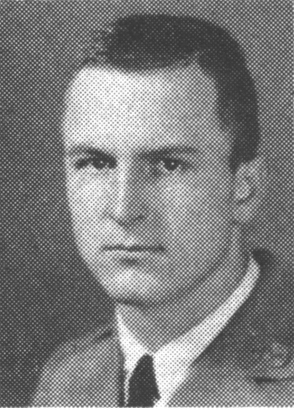 He was the son of Fred H. and Lois T. Whitney of Union, SC.  He was a graduate of the Union High School, and of Clemson College in 1939 with a BS degree in Industrial Education.  While in Clemson he was a member of the Block “C” Club, the Palmetto Literary Society, the YMCA Council, and the Sophomore, Junior and Senior Platoons.

In 1939 he went to Walterboro as the high school shop instructor, remaining there until he entered the army on March 5, 1942.  In June of 1942 he married Dorothy Mae Graham of Ruffin, who was then the music instructor in the high school.

Lieutenant Whitney was assigned to the 307th Infantry Regiment of the 77th Infantry Division (Statue of Liberty Division), which was activated on March 25, 1942.  After almost two years of training in the states the division left for the Pacific area in February of 1944, landing in Hawaii in March of 1944, where the division had further training in amphibious landings and jungle warfare.  In July they departed for Guam, making an assault landing on July 21st.  Lacking amphibious vehicles, the troops had to wade ashore from the edge of the reef, after being dropped by their landing craft.  After successfully defending the beachhead for several days against counterattacking Japanese forces, the division drove north, seizing Mount Tenjo and linking with the 3rd Marine Division on July 28th, and by the 30th had captured the Orote airfield and the Apra harbor.  Continuing north, they met and engaged the Japanese forces at Mount Barrigada on August 2nd to August 4th.  It was during this engagement that Lieutenant Whitney was killed in action.  His wife was notified by the war department in early September that First Lieutenant James Whitney had died August 3rd in action against the Japanese on Guam.  He is interred at Plot D Row 0 Grave 479 in the National Memorial Cemetery of the Pacific in Honolulu, Hawaii.  He was the recipient of the Bronze Star for gallantry in action, and the Purple Heart.

Survivors as of that time included his parents; his widow; a brother, William Whitney in the Merchant Marine; a sister, Mrs. Furman Finley of Seneca; and two aunts, Mrs. W.J. Lancaster and Mrs. T.J. West, both of Union, SC. 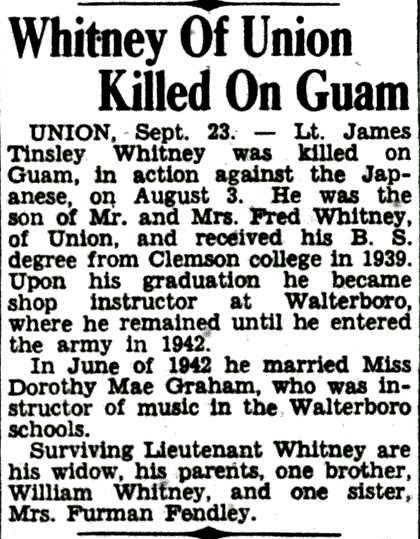