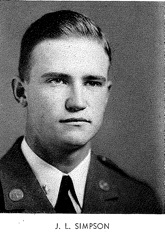 Three decorations, awarded posthumously to Second Lieutenant Jerome L. Simpson of Iva, were yesterday afternoon presented to Lieutenant Simpson’s mother, Mrs. John L. Simpson, at a brief but impressive ceremony in front of the Simpson home.  More than 200 persons witnessed the ceremony.  The presentations were made by Colonel Oliver H. Stout, commander of the Greenville Army Air Base.

Lieutenant Simpson, who was in the Air Corps, was killed in the Southwest Pacific early this year.  The Silver Star was awarded the Anderson County flier for gallantry in action in New Guinea November 1942.  The Distinguished Flying Cross was awarded extraordinary achievements from October 1942 to December 1942. and the Air Medal was awarded meritorious achievement in 25 air operations.

“Iva Officer In Army Dies In Pacific Area
2nd Lt. J.L Simpson was killed in an automobile accident “somewhere in the pacific area” on December 25.  Lt. Simpson was a graduate of Clemson College in 1941.” 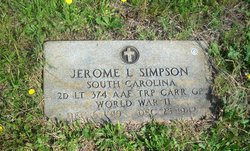