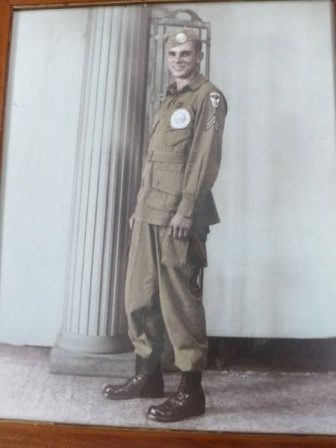 This is just a note to let you know that I received your Xmas greeting and appreciate it very much.  When you’re so far from home for so long it makes news and greetings more welcome than ever.

I hope that you and your family had a very Merry Xmas and the happiest of New Years.  For me, I guess it was one of the best Xmas’s of my life.  We had our first hot meal in over a month Xmas day.

I know that you, being a minister, are interested in knowing what the men’s attitude is toward God when they’re in combat.  There are so many times when you know that there’s no power on earth that can possibly help you, it is then that you unconsciously turn to a Higher Being.  I did many times and it always gave me a feeling of comfort.  I had the opportunity only once to attend church services.  The services were held on the side of our perimeter farthest away from the main force of the enemy and the men who gathered there in the rain with their steel helmets and rifles hadn’t eaten or been dry in five days.  It was indeed a haggard and weary group of men, but their faith in God hadn’t been shaken in the least.  We had communion that morning – and it was an unforgettable sight.  The men, on bended knee in the mud, each taking a bit of K ration biscuit and a sip of rain water from a canteen cup.  I would have liked to have a picture of that group, but of course, that was impossible.  The mental picture though, is certainly one that will remain with me for life.  Never have I seen a more sacred service in any church.

Tell all the homefolk hello for me, I’m looking forward to the time when I’m back for good.

The following biographical information is contained in a framed plaque in a Sunday School room named in his honor at the First United Methodist Church in Lawrenceburg, TN and was provided by the Associate Pastor of that church in January, 2011:

Jerry Martin Thomas, son of N.G. and Mary Martin Thomas, was born on Easter Sunday, April 20, 1924 in Cope, South Carolina.  He started to school at Cope, but the family moved to Live Oaks, Florida in 1932 and Jerry was in school there for three years.  With his family he moved to Lawrenceburg, Tennessee in 1935.  Almost all of his grade school education and all of his high school work was done there.  He graduated from Lawrence County High School with honors in 1942.  He was regular end on the football team and was an active member of the Future Farmers of America.  He had one semester’s work at Clemson College in South Carolina.

Jerry joined the Methodist Church in Live Oaks, Florida on Easter Sunday of 1933 and transferred his membership to First Methodist in Lawrenceburg, Tennessee in 1935.  He was active in church, Sunday School, and Youth Work and was President of the Mt. Pleasant Sub-District of the Methodist Youth Fellowship in 1940.

All of the adults as well as the youth with whom he was associated regarded Jerry as a good boy, living a consecrated Christian life.  This was evident in his letters to his family and to his pastor.

Jerry belonged to the Emergency Reserve Corps at Clemson College and was inducted into active military service at Fort Oglethorpe March 11, 1943.  He was sent to Camp Tacoa, Georgia for about six weeks and then to Camp MacKall, North Carolina.  He was sent to Fort Benning, Georgia for his jump training in the Paratroopers and then back to Camp MacKall until January, 1944.  He was at Camp Polk, Louisiana until March 22, 1944 when he left for overseas.

He was on New Guinea for six months and in the Battle of Leyte where he fought for one month.  He was in the group that made the surprise landing on Nasugbu, Luzon about January 29, 1945.  The men suffered unbelievable hardships in this area for weeks, without food for days on end.

Jerry made the supreme sacrifice for his country in the performance of his duty February 19, 1945.  Jerry was a good soldier and was devoted to his buddies.  He had risen to the rank of Sergeant and had been recommended for a higher rating.

He was a hard working boy, very much interested in agriculture.  He was particularly interested in dairy cattle and had built up his own herd to fifteen or more fine dairy cattle.  He was most devoted to his family and friends and they to him.  He was unselfish, loyal, clean, and fine – a true Christian gentleman.

The following obituary was printed in The State newspaper on Sunday, March 18, 1945, and was research and provided by Major Dawson Luke, USA Ret, of the Clemson Corps:

There is a memorial marker placed in his honor by his family in the Mimosa Cemetery in Lawrenceburg, TN. 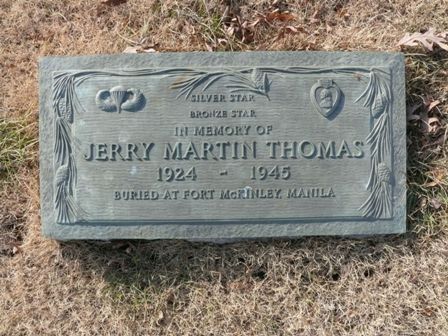 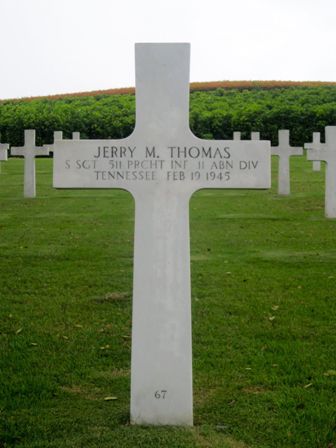