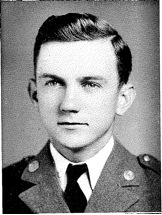 The following letter was from 1st Lt. (Capt. after Buna) Dennis M. Mahaffey, a 1936 Clemson Agricultural College alumni, who was actually in "B" Company 126th when they shipped out to Australia.
Capt. D. M. Mahaffey
Co. A, 126th Infantry
San Francisco, Ca.
Feb. 24, ‘43

Dear Lib:
In my many happy hours spent with Ernest I have heard him speak of you and the rest of your family so much that I feel as if I know you all.
I had been wanting to know your last name and address so I could write to you.  I wrote the rest of the family some several weeks ago, but at that time I didn’t know that you were with them.  Since receiving your nice letter of Jan 11, and now that we are back in Australia I will attempt to tell you as much as I can possibly get through the censor.  I wrote your Mother and Dad as soon as I possibly could – Due to censorship regulations I had to tell of his death to Back home [?] in such a roundabout way.

“Pee Wee,” we all knew him as that, was killed instantly by a sniper’s bullet.  He never knew what hit him.  If he had to go I am so glad that he was spared the suffering and heartache that was the experience of some.  After seeing this first hand no one can imagine the horrible suffering that some of my friends are going through.  To me it is now such a relief to know that his death was instant and painless.  His grave is in New Guinea and someday I hope to tell and show his family on a special map just where it is.

We are back in the same company area that we had before we went to New Guinea.  Just the other nite I went to the exact spot that he had had his living quarters.  As I stood there I recalled the many happy hours we’d spent together.  I recalled the last words he ever said as we were going into battle he said to me “Mac, I hope my dog tags stay together.”  I just put my arm around his shoulder and said, “Well Pee Wee I’ll do everything in my power to keep them together.”  Thirty minutes after that conversation he was hit.  It is most heartbreaking to recall our associations.  All of his men and friends, they are many, outside this company feel the same toward him that I do.  To some we can’t mention his name without their breaking.  To my way of thinking this is one of the greatest tributes that can be paid to him.  My heart goes out in deepest sympathy for ones are members of his family.

As we were going up to New Guinea, Pee Wee and I were talking one night after we had gone to bed and we made each other the promise that in the event anything happened to either that the other would write the family and girlfriend concerned.  I imagine I was closer to him than anybody in the army and now I think he must have had a premonition of death.  I do hope that your mother and father have received my letter re this.
Pee Wee had some snapshots in a letter in the bottom of his trunk that we took at [Fort] Devens.  I wonder if it would be asking too much for you to have a reproduction [made] & send them to me.  I had the same as he did but I lost mine one day in New Guinea during a battle and never found them again.  I would so much like to have a copy of them, especially the one of he and I in front of an army jeep.  I imagine that your mother and father have received his belongings by now.
Since getting back I have received my captaincy.  It was rather unexpected but I do appreciate it very much.
My greatest ambition is to get this mess over with and return home.
Again I appreciate your letter so much.
Very sincerly yours


Click HERE to view letters from Lt Cottingham's family members and a fellow officer that was assigned to Lt Cottingham’s unit.

The parents of Lieutenant John Earnest Cottingham, agricultural engineering '41 of Dillon, have received the decoration of the Purple Heart, which was awarded to him posthumously.  According to the certificate which accompanied the decoration, he was granted the Purple Heart "for military merit and for wounds received in action resulting in his death November 21, 1942."  The family of Lt. Cottingham has received some of the details of his death.  He was killed in the vicinity of Buna, New Guinea, where some of the bitterest and most bloody jungle fighting of the war took place.  His body lies in the little American cemetery near that place.  "Although the battle was continuous at the time, a simple but inspiring funeral service was held by the chaplain at his funeral," wrote the commanding officer of his regiment.  Lt. Cottingham was at the head of his platoon, leading it against an enemy position when he was killed.  His body, shot through the heart, was found within ten feet of art enemy pill box.  Many letters attesting to the character and leadership of this young Clemson graduate have come from his comrades in New Guinea.  Colonel C. M. Tomlinson wrote, "we all felt when your son so courageously paid the supreme sacrifice for his country that we lost a great leader and many of us lost a personal friend."  His battalion commander wrote that "John was a brave and courageous officer, well liked and ad- mired by both the officers over him and also by the men who served under him, which to an officer means a great deal more.  He was a very close friend and his death is indeed a loss to me also."  Another letter, written by his company commander, said that, "A better soldier and officer never wore the uniform of the United States.  He died as he lived - putting everything he had into the problems and situations as they presented themselves.  He always exemplified the highest standards of manhood.  To the last he exercised the traditional high standards of bravery and courage that symbolize the American soldier and officer.  His name even now cannot be mentioned to his men without their breaking.  To me that is the finest tribute that can be paid a man."  While at Clemson he was scribe of Alpha Zeta, national honorary agricultural fraternity

The Dillon Herald, Dillon, South Carolina
Thursday – Jan. 7, 1943, Page 1Col7
Lieut. John Ernest Cottingham Jr. Killed In Action
News was received Sunday by Mr. and Mrs. John Ernest Cottingham that their only son, John Ernest, Jr., had been killed in action while on duty with the American Expeditionary Forces in the New Guinea area on November 21st.  He was a Lieutenant in the army, and had been in service since August 1st.
When he first volunteered for military service, Lieut. Cottingham was sent to Camp Claiborne, La., and was later transferred to Camp Livingston, La., Fort Devins, Mass., and finally to Australia and New Guinea.  The last letter received by his family from him was on November 7th, at which time he was stationed in the region of New Guinea.
Ernest was 23 years old, his birthday being November 3rd.  Since early childhood, he was a member of St. Paul’s Methodist Church of Little Rock.  He attended the schools of Dillon, graduating from Dillon High School in 1941.  He then attended Clemson College where he was a member of the ASAE fraternity, Alpha Zeta and the Wesley Foundation.  Because of his outstanding record in his chosen field of agriculture, he was awarded a fellowship at Iowa State University, at Ames, Iowa, and he would have pursued his studies further at this university had not the war intervened.  When it became known that he was to enter military service in preference to continuing his education, the president of Iowa State University wrote to express his regret, stating that the fellowship would be open to him as soon as he was released from the army.
A young life so full of promise sacrificed in the struggle for freedom, justice and Christian civilization cannot be in vain, but his example of cheerful service, fortitude and patriotism will continue to inspire all others whose lives he has touched.
Ernest is survived by his father and mother, who was Miss Ruth Wannamaker of Orangeburg, and two sisters, Mrs. George Ashley, of Bloomfield, Mo., and Ruth Cottingham, a student at Winthrop College.
Obituaries were provided by Helen Belden Moody – Visit Helen’s Little Corner at https://www.helenslittlecorner

“Dr. Camp, a native of Greenwood, is currently writing a book- length manuscript on the same topic; he would like to thank Betty Barclay and Tom Bethea Jr of Dillion and Charles Bethea of McColl for the support.” Click HERE to view full article. 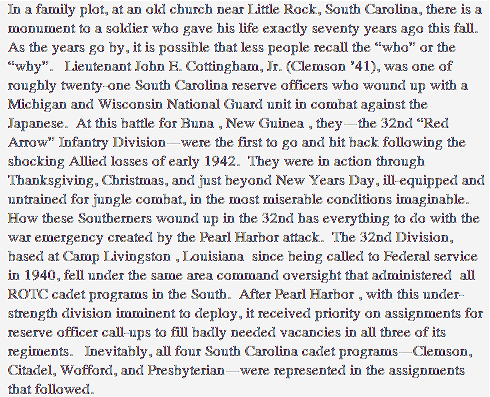