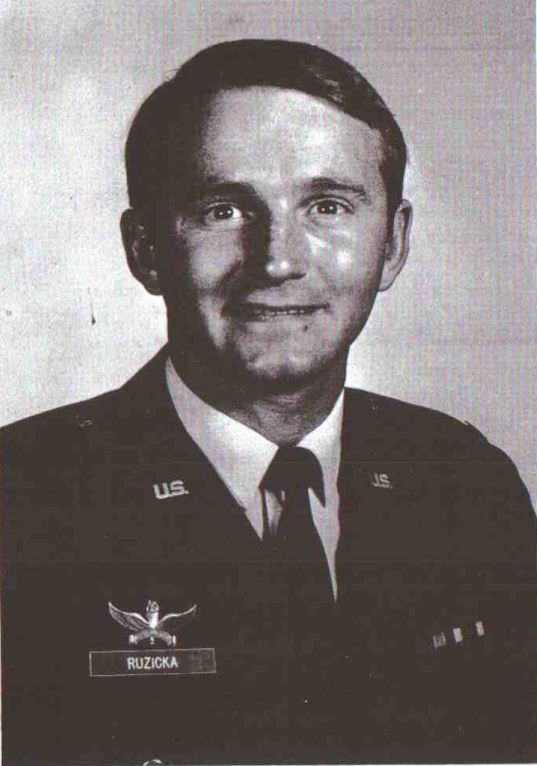 "I remember Joe as an active member of our Arnold Air Society and as an accomplished member of Tiger Band.  I want to say he was the leader of the AFROTC band that played at Pass in Reviews and at special events."

"I knew Joe Ruzicka very well...we actually took tap dancing from Frances Stevenson when we were about 9 or 10.  His mother was a music teacher who had a beautiful voice.  When she would sing in a group, the group would stop singing just to listen to her."

Joe Ruzicka’s name is also listed on The Arc Light Memorial at Andersen Air Force Base, Guam, which is dedicated to the 75 Strategic Air Command personnel who lost their lives flying B-52 missions against Communist forces in South East Asian operations.

The chalice and paten used every Sunday in St Bartholomew’s Episcopal Church in North Augusta, SC was given to the church by the Ruzicka family in memory of Joseph Ruzicka.

The following was taken from the Program of Memorial Service held on 20 August 1972 at St. Bartholomew’s Episcopal Church, North Augusta, South Carolina. This information was provided by Mrs. Pat Kotti of North Augusta, a close friend of the Ruzicka family, who served as the organist during the Memorial Service.

Captain Joseph Lucas Ruzicka, Jr. was born November 3, 1945 in Oak Ridge, Tennessee to Lucie Ruzicka and the late Joseph L. Ruzicka.  He graduated from North Augusta High School in 1963 where he had been a member of the Beta Club and Annual Staff, commencement speaker, National Merit Finalist, student council representative, school reporter for The North Augusta Star and candid photographer for the yearbook. He was active in community activities – twice winner of the Jaycee Safe Driving Road-eo, a Boy Scout, an Explorer, soloist in the Boy Choir with the Augusta Choral Society, acolyte at St. Bartholomew’s Episcopal Church for 8 years and accomplished musician.

He graduated from Clemson University in 1967, which he had attended on the Honors Program. He was a member and talent director of the Clemson Tiger Band, a student officer in the Air Force ROTC, a member of the National Honorary Music Fraternity, a student leader in campus activities and in the Episcopal Church there.

Commissioned a 2nd Lieutenant in the USAF at Maxwell Air Force Base in 1967, in October of that year he was assigned to Lowry AFB as a student in the Aerospace Munitions Officers School, later as an instructor.  In April 1970, he went to Undergraduate Navigator Training and Navigation Bomb Training at Mather AFB in Sacramento, California.  There he met Miss Calista Muck and they were married in March of 1971.  In November of 1971, he was assigned to Beale AFB with the Strategic Air Command. A daughter, Jennifer Lyn, was born February 17, 1972.

He was assigned to TDY on Guam in June of 1972 and then to Thailand on July 21.  He lost his life when the B-52 on which he was the navigator crashed on July 30, 1972.  Among Captain Ruzicka’s awards and decorations are the Air Force Commendation Medal, the National Defense Service Medal and the Vietnam Service Medal.

Joe loved life; he enjoyed and lived every day to the fullest.  When Joe walked into a room, it became alive.  You knew he was there for he had boundless energy and enthusiasm.  He was original and always eager to try something new.  He liked people and could always find something good in everyone.  He believed in being himself and relished the challenge of being different.  Joe always strived for excellence as a student, as an officer and even more so as a son, a brother, a husband and a father.  He loved the great outdoors – all the beauties of nature, the sunshine, the rain and the snow, the ocean and especially the grandeur of the mountains.

One of Joe’s favorites – “I will lift up mine eyes unto the hills from whence cometh my help.” Psalm 121:1

The following information was obtained from the Air Force Safety Center Judge Advocate General Office at Kirtland, AFB, New Mexico, the organization responsible for maintaining Air Force Safety Inspection Board Reports of Class A & B accidents subsequent to 1956.

The following history of flight is based on a thorough review. (Times listed are G time).  Snow 3, in B-52D SN 56-677, was scheduled for an 1857 take-off from U-Tapao Airfield, 30 July 1972, on a classified Arc Light Mission as the third aircraft in a three ship cell.  Aircrew activities were normal and on schedule from the time the crew left quarters until engine start.  The mission, including weather, intelligence, and tactics was briefed by the Wing Bomber Operations staff.  Engines were started at 1815. At 1820 Snow 3 informed the launch control officer (Charlie) that his number 7 hydraulic pack was inoperative.  Maintenance specialists were dispatched and, after working approximately twenty-five minutes, tentatively identified the problem as a faulty cockpit switch.  The pilot of Snow 3 passed this information to Charlie and stated that he was prepared to accept the aircraft since the number 7 standby pump was working properly and an inspection had revealed no system leaks.  Charlie informed the night DO of Snow 3’s problem and received his concurrence with Snow 3’s decision to take the aircraft.  Snow Cell took off ten minutes late at 1905 due to delays caused by minor maintenance difficulties experienced by Snow 1 and 2.  The cell flew an abbreviated Arc Light departure to regain time lost due to the late take-off.  At 1916, Snow 1 reported to Charlie that he was experiencing a radar problem and requested technical assistance.  This transmission was followed closely by Snow 3 reporting to the cell leader that the low pressure warning light for the number 8 hydraulic system was illuminating intermittently with a corresponding fluctuation in the system pressure.  Snow 3 was advised to first insure that the standby pump circuit breaker was pulled, and then check the pack performance under a load.  Snow 3 performed the test and advised Snow 1 and Charlie that, although the low pressure light flickered to a bright and the pressure fluctuated one to two hundred psi, the pack appeared to be taking the load.  He stated that he would continue with the number 8 pack on and standby pump circuit breakers 5, 6, and 8 pulled.  Charlie reminded Snow 3 that there was no time limit on the standby pumps if he chose to use them, and that in any case, to insure the standby pump circuit breakers were in at the IP and for landing.  Charlie advised the night DO of Snow 3’s problem and of the decision to continue and received his concurrence.  At 1919, Snow 2 assumed navigation responsibilities for the cell for several minutes while Snow 1 recycled his radar set to correct a scope phasing problem.

The subsequent climb to and level off at assigned block altitude FL 350/360 was without incident.  Snow cell entered the timing box on a heading of 360 degrees at 1954:30. At 1958, Snow lead made a right turn to 180 degrees followed by an immediate left turn to 165 degrees.  Snow 3 cut the first turn short and approached abeam of Snow 2.  Snow 2, to keep separation from Snow 3, did not finish the right turn to 180 degrees and closed abeam of Snow 1.  Flight conditions at this time were for the most part IFC in cirrus with an increasing number of thunderstorms showing on radar as the cell progressed eastward through the box.  The Cell turned to 360 degrees at 2011, and at 2018, lead’s gunner reported Snow 3 to be eight miles in trail.  The northeastward movement of the cell was continued by turning to 104 degrees at 2019:30.  Shortly before the cell turned further left to 074 degrees for weather, Snow 1 gunner reported Snow 2 and Snow 3 at 3 and 5 miles respectively.  During this period Snow Cell experienced light to moderate turbulence, light to moderate rime icing, and heavy St. Elmo’s fire. Almost continuous lighting was reported, emanating primarily from below and to the right.

This was followed at 2025 by a transmission directing the cell to increase true airspeed to 470 knots. At 2026:30 Snow lead called for a turn to 030 degrees. Snow 2 and 3 both acknowledged.

The gunner reported considerable difficulty preparing for bail out due to “G” forces and the apparent nose down attitude of the aircraft.  He had similar problems on egress.  Prior to leaving the aircraft, he thought he heard the beeping of a personal locator beacon.

The aircraft then veered to the north and climbed steeply just before diving to the ground.  The crash was followed almost immediately by an explosion.  Analysis of the crater indicates the aircraft impacted intact approximately 56 degrees nose down, in a 78 degree right wing low attitude.  Engines were operating in the 85 to 95 percent range.  There was no evidence of fire or explosion prior to impact.

A search and rescue force, consisting of two HH-53 helicopters, an OV-10 with forward air controller and a HC-130 Airborne Command Post, arrived on scene at approximately 2245.  The gunner was picked up at 2325.  The bodies of the remaining crew members were recovered between 0635 and 1045 the following morning.

The exact time of impact could not be determined.  Efforts to obtain seismograph confirmation from two different locations in Thailand were unsuccessful.

Initial efforts to secure the site and safeguard evidence for subsequent investigation were exacerbated by the violence of the crash and subsequent weapons detonation.  Pilferage of the widely scattered debris and crew survival equipment started almost immediately.  Monsoon rains hindered surface access to the site and severely complicated crater excavation.

The following was taken from an obituary article researched and provided on 19 October 2009 courtesy of Ms Phyllis Britt, News Editor of the North Augusta Star newspaper.

NORTH AUGUSTA – Capt. Joseph L. Ruzicka, 26, of North Augusta, was killed Sunday night in the crash of a B-52 bomber in northern Thailand.  The plane, based at the B-52 base at Utapao, crashed en route to a mission over Vietnam, according to a spokesman.  According to a U.S. mission spokesman the crash claimed the lives of five Air Force officers.

Capt. Ruzicka was an outstanding graduate from North Augusta High School and Clemson University.  He was a member of St. Bartholomew’s Episcopal Church. A career serviceman, he had made his last visit to North Augusta in April.  He left for Guam, June 1, and reported to Thailand on July 21.

Memorial services for Capt. Ruzicka will be held Friday at Beale AFB, Calif. Burial will be in California.  The family suggests that memorial contributions be made to the Memorial Fund at St. Bartholomew’s Episcopal Church in North Augusta.  Friends may call at the residence of Mrs. Lucie Ruzicka, 1207 Highview Ave., North Augusta. 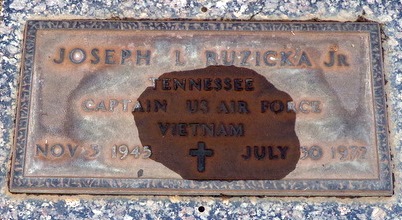 Arts and Science – Vignette Written by Kelly Durham for The Echo