The following is excerpted with permission from comments written by Stephen A. Matthews, Webmaster of the 281stahc.org website.

"1LT Leon Darvin Flanders has the distinction of being one of the first members of what would become the 281st AHC on 17 Jun 1966 to be killed in South East Asia.  LT Flanders preferred to be called Darvin and was known as Darvin or “Darv” to his friends.  After college Darvin attended the Infantry Officer’s Basic Course at Fort Polk, LA, and upon completion was transferred to Fort Walters, Texas for rotary wing training. Darvin went on to Fort Rucker, AL, where, on July 6, 1965, he graduated with Rotary Wing Class Number 65-8.  Following graduation, he remained at Fort Rucker as a rotary wing aviator with the Department of Tactics.  In September of 1965, Darvin left Fort Rucker and, on November 11, 1965, joined the 145th Airlift Platoon which was to become part of the 281st AHC."

The following was written by, and used with permission of, Fred Phillips, fellow Army Aviator who served with Darvin Flanders in the 145th Airlift Platoon in Vietnam.

"Darvin and I worked together as ‘blackbirds’ at TAC-1 at Fort Rucker for a while before we went to Vietnam. (His middle name was Darvin, spelled with a ‘V’. He didn’t like to be called Leon.)  We shipped over at the same time, and he was assigned to the 145th Airlift Platoon at Nha Trang.  That platoon was actually the predecessor of the 281st, whose primary mission was Project Delta.  By the time my platoon arrived a few months later, Darvin was an experienced slick AC and, unfortunately, a good one.  Of course, the best slick pilot was always assigned to fly the primary pickup aircraft on the hot extractions and Darvin got stuck with that job for a couple of months.  After a few weeks, he started to burn out.  He knew that there was no way he could survive the six months or so left in his tour doing that job.  The rest of us started to worry about him.

Then we went to Tay Ninh.  I started to suspect that the operation wouldn’t be much fun when I got shot down on our first area recon, but that’s another story.  Two days later, one of the recon teams parked in the remains of an abandoned village in C-zone called Bo Tuc.  A few minutes later, an entire NVA battalion marched into the area and camped all around the team.  The team couldn’t move and the NVA appeared to be setting up to stay awhile, so they called for extraction.  Darvin and Pete Frazier got the job.

We planned to use our usual tactics – gunships spraying the area while the slick comes in over the trees, pops up and lands amid the confusion, grabs the team, and gets out of Dodge, all in a few seconds.  This time, there were just too many bad guys and it didn’t work at all.  On short final, Darvin got hit in the foot, the aircraft spun a couple of turns, but Pete recovered it and flew it out.  On the way back to Tay Ninh, Darvin reported that his leg hurt, but that he didn’t want to look at it since he thought his foot was gone.  He finally looked at it when we landed and his foot was still there.  In fact, an AK round had come in through the right chin bubble, hit the FM radio, tumbled, and knocked Darvin’s foot off the pedal.  The whole bullet was stuck in the leather of his boot.  It hadn’t even broken the skin.  Left a heckuva bruise, though.

By then, Darvin had had enough, used up his chances, and the rest of us knew it.  A few of us went to the CO and asked him to give Darvin another job.  A few days later, he started flying ash and trash for one of the Special Forces ‘C’ detachments.  I saw him a time or two after that and he was back to normal, feeling good.  He told me he was glad he didn’t have to fly for Project Delta any more, and that he figured he could survive a couple of tours flying ash and trash.

Then one day, he was eating breakfast in the team shack at some Special Forces camp when a mortar round came through the roof.  Nobody else got hurt.  We all heard it the same day, and somebody said it was a short round fired by the friendlies."

"Darvin, today you would have celebrated your 60th, birthday and forever young to those who knew you.  I remember you as an exceptional athlete with an outgoing personality.  Someone to be admired.  This hero was from the small town of Winnsboro, S.C., in the county of Fairfield."

By direction of the President, the Distinguished Flying Cross is awarded to First Lieutenant Leon Darvin Flanders who distinguished himself by exceptionally valorious actions on 9 May 1966 while serving as aircraft commander of a UH-1B helicopter during a rescue mission of a six man Special Forces reconnaissance team near Bo Tuc, Republic of Vietnam.  When he arrived over the operational area, an air strike was in progress against a Viet Cong battalion and the reconnaissance team was unable to move without exposing its position and suffering annihilation.  After making four low level flights over the action to determine the team’s position, Lieutenant Flanders started to land when the air attack was lifted.  During the final approach to the landing zone, his helicopter received intense enemy fire.  He was wounded in the foot and his aircraft received major damage.  However, after skillfully gaining control of the helicopter, he flew out of range and radioed in another air attack.  This attack ripped the Viet Cong forces and permitted the United States fighting men to escape possible death.  LT Flanders’ outstanding flying ability and devotion to duty were in keeping with the highest traditions of the military service and reflect great credit upon himself, his unit, and the United States Army.

Family members and friends have endowed an ROTC scholarship at Clemson in memory of Leon Darvin Flanders and two other Winnsboro natives who were lost in Vietnam.

Since 1975, the Renwick-Flanders Award has been given annually to the most improved football player at Clemson.  Leon Darvin Flanders attended Clemson on a full football scholarship.  Darvin and Harold McGill Renwick never lettered, but they stayed on the team for four years and played occasionally. Darvin was an end on the team.  The rules for earning an athletic letter were more stringent during the time when they were on the team than it is now as one needed to play a defined amount of time to earn a letter.  They would have lettered had they played under current rules.  Darvin Flanders was an end on the 1958 Mt Zion Institute team which won the Class A South Carolina State High School Football Championship, a team which was quarterbacked by his friend Mac Renwick, also a Clemson Scroll of Honor member.

Lieutenant Flanders’ name is listed on the Vietnam Veterans Memorial Wall in Washington, DC on Panel 08E, Line 056.  His name is also listed on a monument in Winnsboro, SC dedicated to Vietnam War casualties from Fairfield County.

The following was taken from articles printed in The State Newspaper, Columbia, SC on June 19,1966, Page 13A and June 26, 1966, Page 13B, and was researched and provided on 7 November 2009 courtesy of Ms Debra Bloom, Local History Manager, Richland County Public Library, Columbia, SC.

First LT Leon Darvin Flanders, 23, helicopter pilot with the 171st platoon, was killed in Vietnam by a mortar shell which landed in the company area.  He was born in Winnsboro, son of Ridge W. and Jewel Youmans Flanders and was a graduate of Clemson College, where he played football.

Surviving are his widow, Mrs. Gloria Tilley Flanders of Anderson; his parents; a sister, Miss Martha Joie Flanders, and a brother, Randolph Flanders, all of Winnsboro.  Lt Flanders’ body will arrive at McDougal Funeral Home in Anderson and will be taken to the Pope Funeral Home in Winnsboro.  Funeral services will be held in the Stephen Green Baptist Church and the body will be returned to Anderson where graveside services with full military honors will be held in New Silver Brook Cemetery.

The following was extracted from an undated newspaper article, probably from the Fall of 1966, written by Bob Herndon, and provided by Keith Brewington, Concord, NC, friend of the Flanders family.

Widow of Lt. Leon Flanders Given Awards in Ceremony

The 2,600 man cadet corps rendered military homage to the 23-year-old lieutenant, who graduated from their ranks only two years ago in 1964 and was commissioned a Second Lieutenant in the Infantry.  “We will continue to work diligently to make sure that the cause your husband gave his life for in Vietnam will triumph,” Col. Brown said.  Mrs. Flanders, overcome by emotions and pride in her husband’s valorous achievements, tightly grasped the awards and was escorted by Lt. Col. Richard Robins to the hillside spot where she watched the cadet corps “pass in review” across Bowman Field.

The Lieutenant’s parents, Mr. and Mrs. Ridge W. Flanders of Winnsboro, along with Mrs. Flanders parents, Mr. and Mrs. Leon Tilley of 1505 S. Murray Ave., Anderson, and numerous other friends and relatives formed the official party which sat in a section of seats behind the widow and overlooking the parade grounds.  Mrs. Flanders, wearing a dark green suit with beige hat, stood beside Lt. Col. Robins as the corps marched by, platoon after platoon.  The Army ROTC Band playing throughout the ceremony and the salient sounds of the marches seemed to lighten the evening shadows that stretched from Tillman Hall.

Lt. Flanders was killed June 17 of this year during a mortar attack by the Viet Cong.  Described by his military peers as “the perfect example of the typical young officer and soldier,” members of his Vietnam unit, the 10th Combat Aviation Battalion, honored his memory by naming a heliport for him, “Flanders Heliport.”  The new helicopter field is located near Dong Ba Thin, home base for his helicopter battalion.  This unique honor was accorded Lt. Flanders in August.

Before the medals were presented, citations outlining the lieutenant’s exploits were read over the public address system.  Lt. Flanders after leaving Clemson attended flight training and qualified for a helicopter pilot, just before he was shipped to the war torn country. Lt. Col. Dewey Franklin, the Clemson University Professor of Aerospace Studies, and Congressman Bryan Dorn of Greenwood were among the many other dignitaries present.  Mrs. Flanders, who lives with her parents, is a member of Dorn’s office staff. 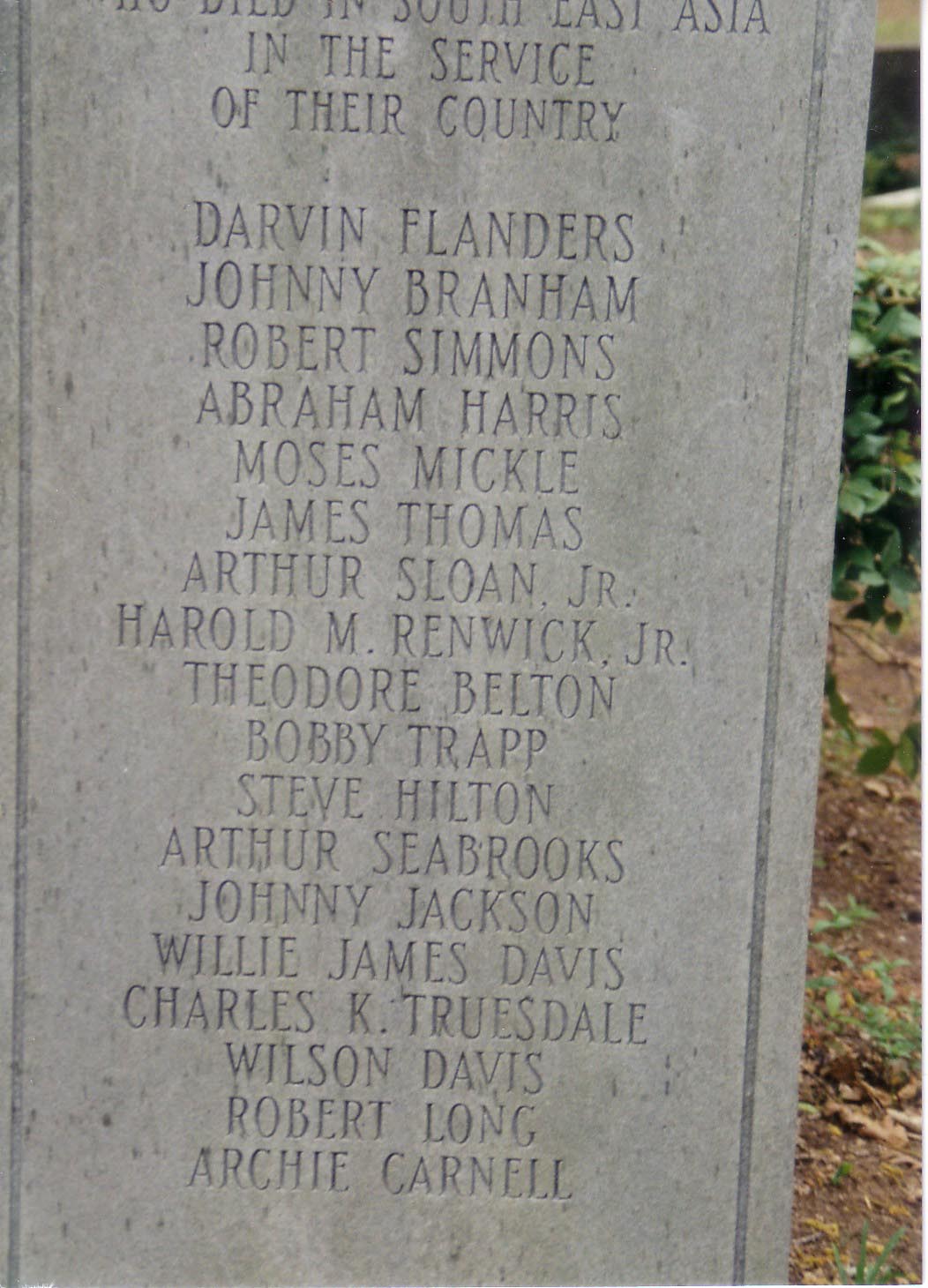 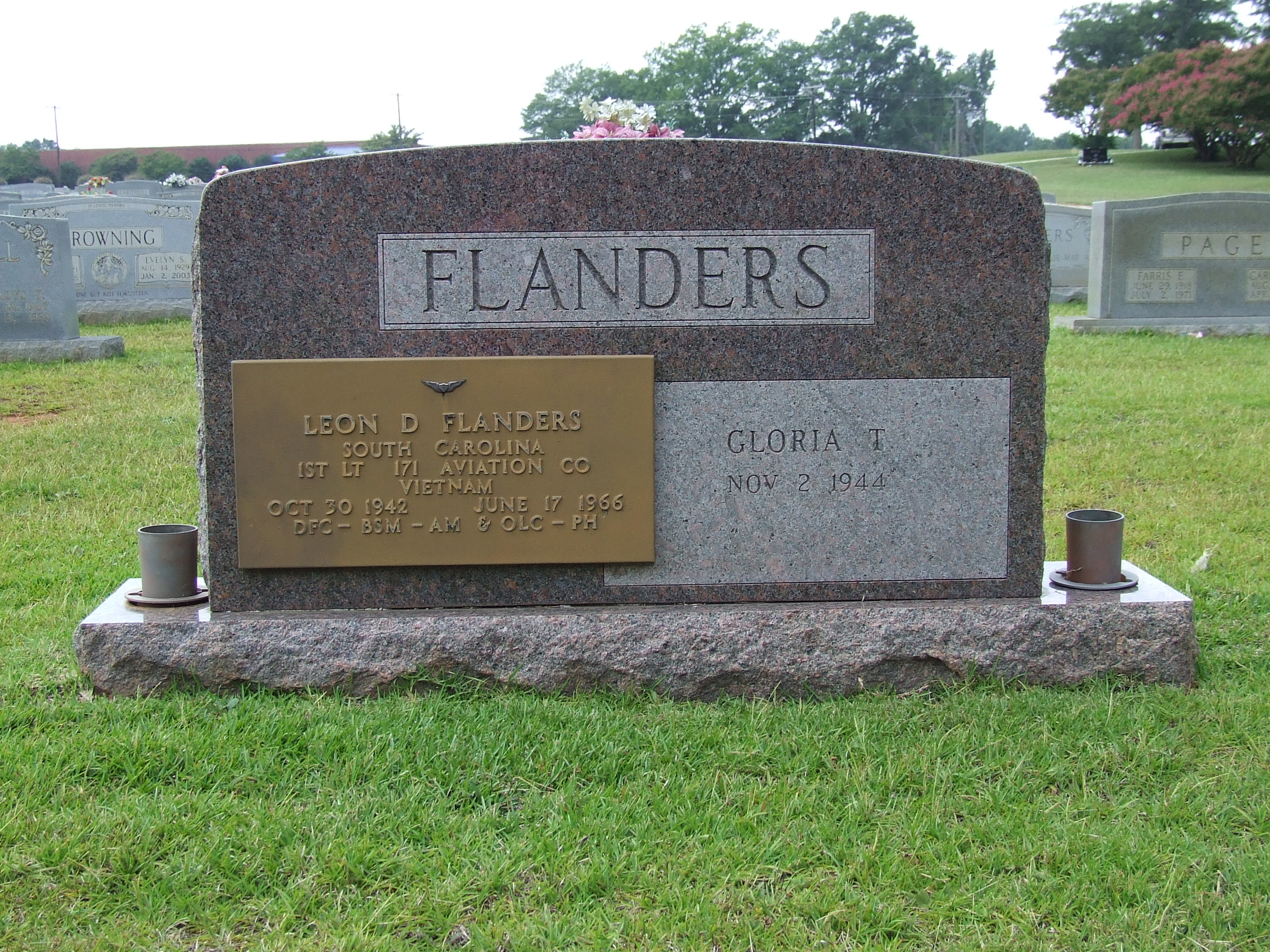