From an article written by a West Point classmate,

COLONEL LEWIS ANDERSON PAGE, SR. was a soldier.  He served his country faith­fully for many years.  Young Lewis Jr. was raised in a military atmosphere and he thought it a wonderful life.  He decided as a youth that he would follow his father's career.  He, and his young brother Alex, would serve the nation as officers in the Armed Forces.

Lew was the first to enter the Service.  He was in his second year at Clemson College when he joined the Air Corps in 1942.  He was a young man of eighteen when he began his Aviation Cadet Training.  A year later Lew had earned his navigator's wings and a commission in the Army of the United States.

He was immediately sent into combat crew training in preparation for an overseas assignment.  Lew went to England and was assigned to the crew of a B‑17 Flying Fortress.  The big bombers flew their long dangerous journeys into the heart of the German Reich.  The B‑17's, along with the other allied bombers, constantly hammered the German war productivity.  Night and day the "Forts" battered the continent.

One murky afternoon twenty‑two thousand feet above the German countryside Lew's plane was hit and felled by enemy  fighters.  The crew bailed out of the stricken aircraft.  Along with the others Lew hurtled down through the sky.  Being a navigator, he know the height of the clouds.  He allowed himself to fall free for seventeen thousand feet into their protective billows before he opened his parachute and halted his long plune.  Moments later he touched the warm sweet earth.  Lew had hardly recovered from the jolt of his landing when they were about him ‑ solemn faces, the taut faces of German farmers, forming a cordon of pitchforks and shotguns.

Lew spent that sleepless night in the local jail.  In the morning he started his trip north, to a year's internment in a German Prisoner of War Camp.  There on the bleak shores of the Baltic Sea, Lew was an inspiring leader for others to call upon.  He was always cheerful and ready to help all without hesitation.  He was never so concerned with his own wants that he would not willingly turn aside for others.

Eventually victory came to the Allies in Europe and freedom for Lew.  He returned home.  However, he was a soldier and knew it would be his life.  He turned his sights toward entry to West Point.

In July 1946 Lew's study and diligent efforts were rewarded with an appointment to the United States Military Academy.  Former First Lieutenant L. A. Page, Jr. entered the Academy along with forty‑five other former Army Officers and the largest veteran class in the school's history.

The first year was a long difilcult test.  Lew bent under the pressure many times but always fought back to surmount each obstacle.  Three more years he was tested and found true.

Lew was a Cadet with spirit and full belief in the Corps.  He was a versatile youth and took part in many diverse activities.   He played saxophone in the band.  He sang with both the Glee Club and the Catholic Choir.  Lew participated in inter‑collegiate and intramural athletics.  He was also a member of the German and Radio Clubs.

At graduation Lew turned to the Air Arm that had grown along with him and had become a full fledged separate service.  A second time Lew went after his wings.

Graduation brought another wonderful gift.  For four years Lew had thought of the day when he and Joan Wojciehoski could be married.  Their dreams were finally realized.  Lew and Joan were married the day after graduation in the Catholic Chapel at West Point.

Then there were three.  Lew and Joan were thrilled by the birth of a daughter.  She was named Carol.  The new family had a a few wonderful months together.

In the meantime Lew was busy training in Gunnery School at Luke Field, Arizona.  Upon completion of his course, he was once more prepared for overseas combat duty.  This time Lew headed West to war.  In the hostile skies over North Korea he flew 75 combat missions.  As Squadron Operations Officer Lew fought the Communists both at the planning chart and in the air.  Eventually he completed his Korean tour.  Captain Lew Page returned joyfully to his family and the comfort of his home.

After leave, the family moved to Florida where Lew had been assigned as an instructor, transitioning pilots to jet aircraft.

One day Lew was requested to take a young officer home on emergency leave to Pittsburgh, Pennsylvania.  All was uneventful on the nothern trip.  Then, just after takeoff on the return flight, disaster struck.  The T‑33 caught fire, and when the aircraft went down, Lew rose above it.  He rose higher, much higher than he had ever been before.  Thus he went as he had lived; helping, comforting, and giving service to others.

We all called him "Mother" Page.  It was a name given in humor but only as a hidden expression of our affection for his sincere kindness.  Lew was a man who would willingly give his unreserved help to anyone who needed aid or assistance.  Never did he expect a favor in return.  He served others because he wanted to.

Lew was a devout man.  He never forced his religious thoughts upon others but he was never ashamed to declare his belief in God and his religion.  He acted in accordance with his beliefs.  He was a good Christian.  His morals and thoughts were of the highest.  With him it was always Sunday morning.

Lew was a wonderful man – as a son, a brother, a husband, a father and a friend.  In each capacity he gave fully of his generous self and all in turn recognized his incalculable goodness.

Alex Page was not the only man who lost a brother that fateful day.  Every man in the Class of 1950 lost one too.

Coincidently, in 1948  Lewis Page was the best man at the wedding of his brother Lt. Alexander C. Page to Betty Goodman Tulla, the widow of Valentin Tulla, another of our honorees on the Scroll of Honor.

On a mission in July 1944, German fighters attacked Second Lieutenant Page’s B-17, forcing the crew to bail out.  As the navigator, Page knew the altitude, about 22,000 feet, at which his bomber had been flying.  He allowed himself to fall approximately 17,000 feet before pulling his ripcord and settling to earth under the canopy of his parachute.  Upon reaching the ground, Page was surrounded by German farmers armed with pitchforks and shotguns.  He was marched off to the local jail and later transferred to Stalag Luft I in Prussia.  Page spent the rest of the war in this prison camp on the shores of the Baltic Sea, returning to the United States in 1945.  He was born in AZ and lived part of his childhood in SC.  He probably lived in other places also as his father was an army officer.

Lieutenant Page served in Korea as a pilot but his units are unknown.

Page’s last assignment was in Florida, where he was an instructor teaching pilots to transition to jet aircraft.  On July 20, 1953, Page’s assistance was requested when he was asked to fly a young pilot home to Pittsburgh on emergency leave.  Page and his passenger checked out a T-33 jet trainer and headed north.  The trip to Pittsburgh was uneventful, but just after takeoff on the return leg of the journey, disaster struck.  The T-33 caught fire and crashed, killing Page. 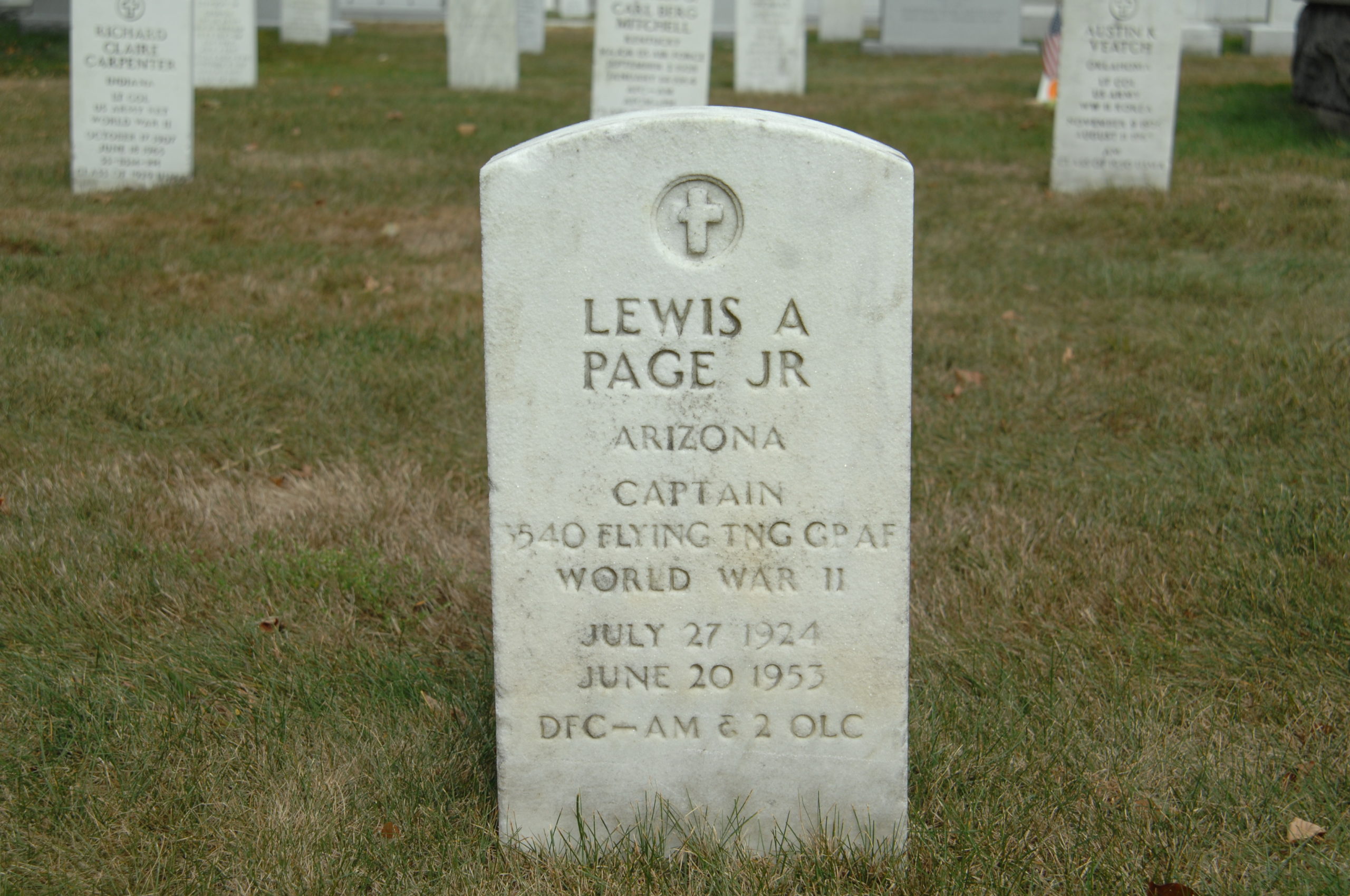