On the day before Thanksgiving, three weeks before his death, Captain Payne had written a letter to his infant son Carl.  The letter arrived home at approximately the same time that Lloyd Payne died.

On this, the eve of Thanksgiving and your fifteenth month with us, I want to thank you for the self-satisfaction and gratification that you have given your mother and I.  We were truly blessed to have a normal, healthy and energetic boy.  You have indeed enlightened both our lives and have opened my eyes more fully to justify why I chose my particular profession as a soldier.

You are indeed a fortunate child, not because you are ours in particular, but because you were born in the United States and can’t possibly conceive of the poverty and untold hardships that the children your age go through in other countries.  It will be years to come before you fully realize the impact of what I have just said; but once you have had the opportunity to see it and work among the more underprivileged, then you too will more fully appreciate your wonderful heritage.  I only wish that I could be with you and your mother tomorrow to give thanks for what we have to be proud of and what our forefathers fought and died for to give us.

Take care of your mother in your own juvenile way.  Your dad misses you very much.

One month and four days after Lloyd Payne’s death his wife gave birth to a second son Wesley.

For his heroism in Vietnam Captain Lloyd Payne was posthumously awarded the Silver Star and on MACV General Orders Number 8, 20 January 1964, the MAAG Detachment Compound, located in Tam Ky City, Quang Nam Province, was designated Payne Compound in his honor.

In the October 1964 issue of the Ladies Home Journal, Mrs. Jane Payne stated in an interview:

“There should be a better way, a more personal way, of breaking the news to families instead of in a coldly worded telegram delivered by a Western Union boy.  A chaplain or some representative of the government should bring the news.  I was lucky, my mother-in-law thought of me.  She had enough presence of mind.  But when I think of those other women, alone in a house when that telegram comes…”

The policy of sending telegrams from Department of the Army “by the numbers” notifying family members of deaths of U.S. Servicemen in Vietnam was changed shortly after Mrs. Payne’s comments appeared in the Ladies Home Journal and both a military representative and a chaplain delivered the tragic news in person."

"Thanks for your effort regarding the veteran’s dedication at Clemson.  My father, Lloyd Payne, died in Vietnam on December 15, 1963.  He was one of the first 100 soldiers killed in the war and has his name engraved on Panel 1E of the Vietnam Memorial in Washington.

Since I was only a year old when he died, I don’t have remembrances of him.  However, a summary of his tour in Vietnam and several of his personal letters home to the family are documented in a section of the book; Vietnam Military Lore - Legends, Shadows and Heroes, 1997, written by Master Sergeant Ray Bows (retired)."

"Adrian and I were on the same floor our sophomore year. We were on company A-4 and roomed in barrack no. 4 on the quadrangle. What I remember about him was he was probably the "nutsiest" (sharpest) guy in the cadet corps. He looked sharp whenever and wherever you saw him. I heard of his death shortly after he was killed. That is about all I remember and that is subject to correction."

Citation to accompany the Silver Star Medal awarded posthumously to Lloyd Adrian Payne:  The President of the United States of America, authorized by Act of Congress, July 8, 1918 (amended by act of July 25, 1963), takes pride in presenting the Silver Star (Posthumously) to Captain (Infantry) Lloyd Adrian Payne, United States Army, for gallantry in action while engaged in military operations in Vietnam on the 14th and 15th of December 1963.  As Senior Advisor to a Vietnamese Battalion, Captain Payne rendered invaluable assistance, advice, and encouragement to the Battalion during a military operation.  When the Battalion had been subjected to sporadic sniper fire throughout the day, he advised the Battalion Commander to send out several patrols to locate the sniper; and although these efforts diminished the frequency of fire, it started again after the Battalion had closed in for the evening and continued throughout the night.  During the entire operation, Captain Payne was at the side of his counterpart advising him in weapons placement, necessary patrol action, and personally checking perimeter security.  As the Battalion elements were preparing to move out of their position on the following morning, they sustained heavy sniper fire from the north side of a ridge and, before they could take cover, heavy automatic weapons fire was received from both the north and south ridges.  Despite the precarious position, Captain Payne continued to leave his protective cover and bravely moved from position to position offering assurance and advice to the Battalion Commander in coping with the situation.  Although he was exposed to this automatic weapons fire, he completely disregarded his own personal safety and continued his advisory efforts until mortally wounded. Captain Payne’s conspicuous gallantry and unselfish actions are in the highest traditions of the United States Army and reflect great credit upon himself and the military service.

“After graduation from Sandersville, Georgia High School, Lloyd Payne earned a Bachelor of Science degree from Clemson College, and was commissioned a second lieutenant on 14 March 1955.  He held assignments at Fort Benning, Georgia; Fort Polk, Louisiana; Berlin, Germany; and Fort Bragg, North Carolina where he completed the Military Assistance Training Course at the Special Warfare School.  He was sent to Vietnam in August 1963 and became an advisor to the 2nd Infantry Division, Army of Vietnam in September 1963. 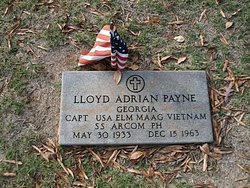