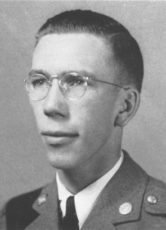 1939
General Science
Cadet Company Commander, Freshman, Sophomore, Junior and Senior Platoon; Tiger Staff
Spartanburg, South Carolina
Army, Lieutenant
41st Philippine Division of the 42nd Regiment
Bronze Star, Purple Heart
Apr 1, 1917
Sep 7, 1944
KIA - Lieutenant Crook was a POW of the Japanese.  He was aboard a Japanese freighter being transported to Japan that was torpedoed and sunk off the western shore of Mindanao.  All 750 POW on board lost their lives.
Manila AMC, Tablets of the Missing
NE

Martin was born in Spartanburg, SC, the son of Dr. Martin and Mrs. Susan M. Crook.  He had his early schooling in the Spartanburg schools, after which he entered Clemson College in 1935.  He was active in the military while at Clemson, being a Company Commander his senior year, and a member of the Fancy Drill Platoons all four years.  He graduated in 1939 with a BS degree in General Science.

During World War II he served with the Army in the Philippines, being assigned to the 4lst Philippine Division of the 42nd Infantry Regiment.  On February 24th, 1945, Martin’s parents received a telegram from the Adjutant General, saying in part:

“The war department has now received the official list of prisoners of war on the Japanese freighter, which you were previously informed was sunk on September 7, 1944.  It is with deep regret that I must now inform you that your son is among those listed as lost when the sinking occurred... The information available to the war department is that the vessel sailed from Davao, Mindanao, August 20, 1944 with 750 prisoners of war aboard.  The vessel was sunk by torpedoes on September 7, 1944 off the western shores of Mindanao.... known circumstances lead to the regrettable conclusion that all of the unaccounted for prisoners lost their lives at the time of the sinking.”

He earned both a Bronze Star and a Purple Heart.

From a posting on Findagrave.com:

Martin enlisted 11 Nov 1940, rank 1st Lieut., U.S. Army, 42 Infantry 41st Division, Philippine Scouts, and in World War II, he was captured on Bataan & taken P.O.W.  He suffered through the Bataan Death March & was sent to Davao, Mindanao, when in Sept. 1944 the Japanese began transporting P.O.W.’s to Manila as the American forces approached the Philippines.  Many of the P.O.W.’s were put on the ‘Shinyo Maru’, a Japanese freighter and sailed from Davao, Mindanao, on 20 Aug 1944 with 750 P.O.W.’s on board, it was hit by torpedos from an American submarine off Davao on 7 Sep.  The Japanese had stated they would kill the P.O.W.’s if the ship was attacked.  To be true to their word, the Japanese shot the surviving P.O.W.’s as they climbed from the sinking ship’s holds.  Those P.O.W.’s who made it into the ocean, were hunted down by Japanese soldiers in life boats & shot.  Only 82 P.O.W.’s made it to shore and were rescued by Filipino guerrillas.

Martin Crook, Jr. was born in Spartanburg, SC, graduated high school & enrolled in Clemson College in 1935.  He was active in the military while at Clemson and was Company Commander his senior year, and member of the Drill Platoons all four years.  He graduated in 1939 with a BS degree in General Science.

First Lieutenant Martin Crook, Jr.’s name also appears on the Tablets of the Missing at the Manila American Memorial & at the Clemson Scroll of Honor and Memorial Park, Clemson University Campus.

Vignette in The Echo Written by Kelly Durham – Hell Ship