Sunday evening Mr. and Mrs. R. H. Wiggins of Little Rock received a telegram from the War Department stating that their son, Pfc. Milton Clair Wiggins had been killed in Holland on Jan. 9th.

Milton was 20 years old on Jan 18th.  He finished grammar school at Little Rock, was graduated from Dillon High School and attended Clemson College one year before his induction into the Army.  Milton received his training in Louisiana and Texas camps and has been on foreign duty since June, 1944.

Milton was the youngest child of Mr. and Mrs. Wiggins.  Prior to her marriage, Mrs. Wiggins was Lucille Blair of Silverstreet, S. C.

A confirming letter from the War Department has been received by Mr. and Mrs. R. Hampton Wiggins of Little Rock stating that the death of their son, Pfc. Milton C. Wiggins, was due to an accidental gunshot wound.  Milton was killed January 9th, in Kerkrade, Holland.  No further details have been received by the family. 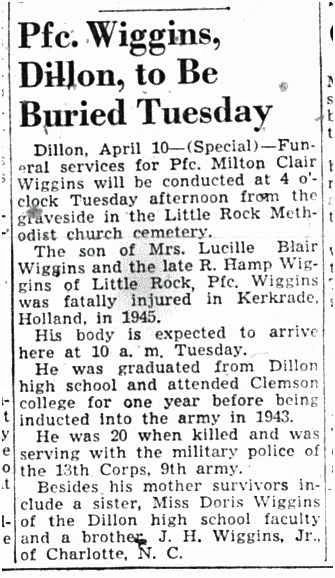 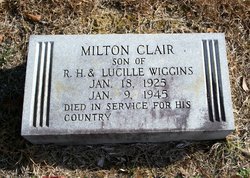