"Thank you for asking me about Mylon Ray Hopkins - KIA Viet Nam.  I went to high school with Mylon and knew him and his parents well.  His Dad was Mayor of Mauldin, SC - where we went to grade school together.  There were three of us classmates who ran together.  Mylon, a friend named Charles Huey (we called him "Chunk"), and me used to "cruise" the Palmetto and Little Rebel drive-inns in Chunk's '56 Chevy on the weekend looking for girls!  Mylon's parents were very religious.  One of their beliefs was against wearing jewelry.  Mylon wore his high school ring on a chain around his neck, under his shirt out of respect for his parents.  Mylon was a quiet, intelligent, normal teenager and a good friend.

I was serving in the USMC stateside when I learned of Mylon's death.  I was deeply saddened at that time.  I wanted to go to Nam and kill as many enemy as I could for Mylon's revenge.  I was not able to do that.  I was able to visit the Viet Nam Wall in Washington, D.C.  I traced his name, had it framed, and it now hangs on my home office wall serving as a personal memorial to this fine patriot and warrior.

"'Hoppy' as I knew him from F Troop 17th Cav shared in many good times and conversation.  Hoppy was a good friend and someone that shared in many conversations about family and home.  We served together in Vietnam during 1968 thru 1969 and were assigned to the same vehicle before I left Vietnam in May of 1969 to serve active duty stateside.  I was able to get to know him pretty good.  It was unfortunate that I learned of what had happened to Hoppy through a letter sent to another Vietnam Vet as I reported back to our next station assignment.  I think of Hoppy each day with sadness and shake my head with disbelief and not able to understand why things happen as they do.  He was very proud of his family as he spoke of them often.  I was lucky to have him as a friend.  He may be gone but not forgotten because he's the type of guy that was able to make an everlasting impression.  May God Be With Him Always."

"Forty years but not forgotten.  Just thinking about you as I so often do.  Forty years have passed, but love for you and your friendship is just as strong as it was.  A lot has happened and we've gotten older - you would have been 61 this year!  I would never ask that you come back from heaven no matter how much we miss you.  You made us so proud.  I have a nephew named Mylon and each time I call his name, I think of you.  I was talking about you today.  I am looking forward to our reunion when I reach heaven's gate.  You will always be my hero!!!"

"Ray, or "Hoppy," as we in F Troop 17th Cavalry called him, was a fine and decent gentleman.  Everyone who knew him, knew that about him.  I liked him the minute I met him.  Ray saw a copy of my hometown newspaper, and asked whose it was.  When I told him it was mine, he smiled and said that he was from the same area of South Carolina. We always talked about home every time I saw him after that.  I have thought of him many, many times since Vietnam.  I'm proud to say that I knew him as a buddy."

"Mylon, I remember you, my friend."

Citation by Direction of the President, the Bronze Star Medal is presented posthumously to Specialist Four Mylon R. Hopkins for distinguishing himself by outstanding meritorious service in connection with ground operations against a hostile force in the Republic of Vietnam during the period November 1968 to June 1969.  Through his untiring efforts and professional ability, he consistently obtained outstanding results.  He was quick to grasp the implications of new problems with which he was faced as a result of ever changing situations inherent in a counterinsurgency operation and to find ways and means to solve those problems.  The energetic application of his extensive knowledge has materially contributed to the efforts of the United States mission to the Republic of Vietnam to assist that country in ridding itself of the communist threat to its freedom.  His initiative, zeal, sound judgment and devotion to duty have been in the highest tradition of the United States Army and reflect great credit on him and on the military service.

The following was taken from an obituary article printed in the Greenville News, Greenville, SC on June 20, 1969.

Specialist 4 Mylon Hopkins, 21, of Mauldin, was killed in action near Da Nang, Vietnam, June 11.
He was a graduate of Hillcrest High School, son of Ray W. and Novella Tharp Hopkins.  He attended Clemson University and was employed by Franklin Process Company prior to his induction.  He was in the 17th Cavalry, attached to the 196th Light Infantry Brigade and was a member of the Laurens Road Church of God.

Surviving also are a sister, Rebecca Hopkins and two brothers, Sammy and Eddie Hopkins, of the home.  Burial will be in Greenville Memorial Gardens with full military honors by a detachment from Fort Gordon, Georgia. 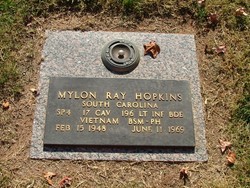