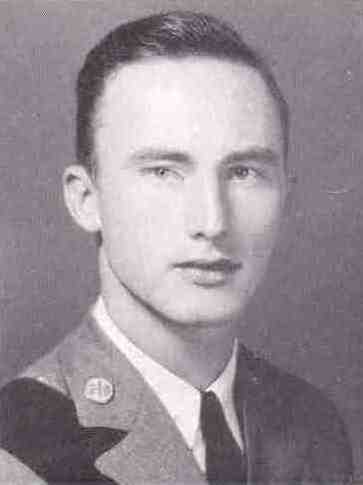 1938
Civil Engineering
Laurens, SC
Army, First Lieutenant
71st Engineer Battalion (PA), 71st Division (PA)
Purple Heart
May 25, 1915
Jan 9, 1945
Killed in Action - Captured when the American forces surrendered on Corregidor on 6 May 1942. Interned as a Japanese prisoner of war at several slave labor camps in the Philippines. Killed on the Japanese POW transport ship Enoura Maru, while docked in Formosa, when the ship was attacked by dive bombers from the carrier USS Hornet.
Remains not repatriated. Reported buried in an unmarked mass grave on the shore of Takao Harbor, Formosa with the 294 other POWs killed in the bombing attack.
SW

I was captured by units of the Japanese Army on April 10, 1942, on the southern end of the Bataan Peninsula.  I made the march northward from the vicinity of Mariveles to San Fernando, Pampanga – a distance of approximately 80 miles.  The march took eight or nine days and later became known as the Bataan Death March.

At my lowest point as a POW, I was a victim of beri-beri, malaria, and diarrhea.  I also developed an eye infection with yellow discharge which would seal my eyes shut. I had no appetite, and I could hardly swallow.  Henry Leitner and Otis Morgan, Clemson classmates, took turns spoon-feeding me, cleaning my eyes, carrying me piggy-back to an open latrine – washing me – and carrying me back to our NIPA shack.

Most of our personal possessions had disappeared.  However, I had managed to keep my Clemson class ring hidden.  Otis, who worked on the FARM as an “in-charge” (an American who understood enough Japanese to pass on the instructions to the POW work details), let it be known that he knew of a gold ring available for trade to the Japanese for food.  A deal was made and one evening Otis came in from the FARM with a small can of potted ham and a live pullet-sized chicken.  Henry borrowed a tin pail, built a fire, and boiled the chicken.  Nothing was left except the bones, which by that time were gleaming white.  They broke the bones and retrieved the marrow with a piece of wire.  Nothing edible remained.

The little can of potted ham was used to make highly-flavored rice balls.  My diarrhea dried up, and the yellow discharge from my eyes disappeared. My appetite was restored.

My debt to Henry Leitner and Otis Morgan is heavy – it cannot be repaid. Otis was killed aboard an unmarked ship carrying POW’s to Japan. Henry died in early 1945 at a POW camp in Japan.

My name is Tammy Erwin. My great uncle was a 1938 Clemson graduate. His name is Otis Foster Morgan. I found his name on your Scroll of Honor. I was so proud to see his name. I have spent the past few years researching his life, including his military career.
I have some wonderful pictures of him at Clemson however I do not have any records of his time there. He was killed on the Enoura Maru on January 9, 1945 by American bombers from the USS Hornet.
Clemson World magazine wrote a fantastic article on him years ago regarding his Clemson ring. I was wondering what, if any, assistance you may be able to give me in finding his records there at Clemson.

1LT Otis Foster Morgan served with the 71st Engineer Battalion, Philippine Army, 71st Division (PA) in the defense of Corregidor and was captured when the American forces surrendered to the Japanese on 6 May 1942.  He survived two years and seven months of imprisonment in POW camps at Cabanatuan on Luzon and Davao Penal Colony on Mindanao before being put aboard a transport ship on 13 Dec 1944 bound for a POW slave labor camp in Japan.

1LT Morgan survived the sinking of the unmarked POW transport ship Oryoku Maru in Subic Bay near Olongapo, Luzon on 15 Dec 1944 by aircraft from the American aircraft carrier USS Hornet.  The Oryoku Maru, with 1619 prisoners aboard, was transporting the POWs from Bilibid Prison in Manila to Formosa.  The survivors of this sinking were held on a tennis court on Olongapo Naval Base until 25 Dec 1944 when the 1300 plus then remaining survivors were transported by train to San Fernando on Lingayen Gulf, Luzon.  They were placed aboard the unmarked POW transport ship Enoura Maru or the Brazil Maru on 27 Dec 1944 bound for Takao Harbor, Formosa.  1LT Morgan was transported from the Philippines to Formosa on the Brazil Maru.  Upon arrival in Takao Harbor, all of the POWs were consolidated aboard the Enoura Maru which was then bombed on 9 Jan 1945 by aircraft from the USS Hornet.  1LT Morgan was killed by the bombing of the Enoura Maru.

1LT Morgan’s remains, along with the remains of the other 294 POWs killed in the bombing attack, were taken ashore and buried in an unmarked mass grave.  One account by George Weller of the Chicago Daily News Foreign Service says they were all taken to a Japanese crematorium and cremated.  Regardless, his remains were never repatriated.

Only 930 POW survivors remained and they were transported from Formosa to Japan aboard the Brazil Maru.  Upon docking in Moji, Japan on 30 Jan 1945, only 435 POWs had survived the trip from Manila to Japan, and within 30 days of arriving in Japan only 264 of the original 1619 POWs were still alive.

1LT Otis Foster Morgan is memorialized on the Tablets of the Missing, Manila American Cemetery, Fort Bonifacio, Manila, Philippines and on a Memorial Wall at the Aiken County Veterans Park in Aiken, SC. 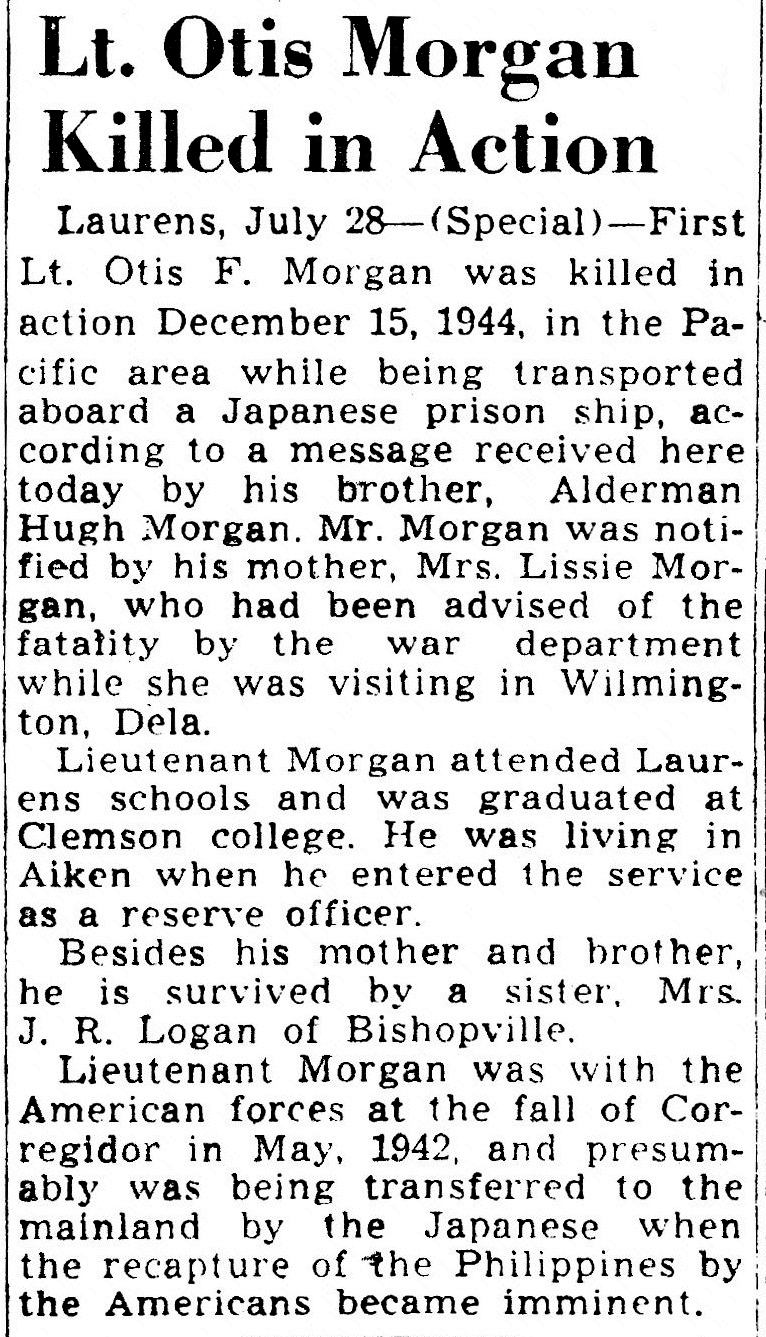