[General Order No. 147, 1945, 42DIV]The BRONZE STAR MEDAL (POSTHUMOUS) is awarded to RANDOLPH B. MCDAVID, 34 842 555, Sergeant, Infantry, Company E, 232nd Infantry Regiment, for heroic achievement in action on 4 April 1945, near Wurzburg, Germany.  Sergeant McDavid, in command of a light machine-gun squad, became a casualty while observing the fire of his own gun.  However the gun position chosen by him was so effective that a rifle platoon was able to advance under the fire of his gun and clear out a nest of snipers.  By his courage and self-sacrifice he made possible the avoidance of heavy future casualties.  Name and address of nearest relative:  Mrs. Virginia McDavid, (Mother), Route 3, Pelger, South Carolina.  Entered military service from Simpson, South Carolina.

The Regiment, with Company C as the leading element, crossed the Main River at Wϋrzburg at 0500,     4 April, moving north through the town in their assigned zones, the Third Battalion on the left of the First Battalion, and the Second Battalion on the right of the First Battalion, the battalions began clearing the city.  Stiff enemy resistance was encountered in the form of snipers, machine guns, small arms, and road blocks.

The Bailey Bridge across the blown bridge over the MAIN River was completed early 4 April.  The 232d Infantry foot elements immediately began crossing the bridge, and all elements were across by daylight.  The 232d Infantry moved into the area cleared by the 222d Infantry turned left, and fought into the northwestern portion of the city against strong resistance.  Elements of the 692d TD Bn supported the attack from the west bank of the river.  The regiment then turned East again with the 3d Bn on the left, 1st Bn in the center, and the 2d Bn on the right.  With the aid of excellent artillery support, the regiment maintained a slow, but steady advance, and cleared approximately 55 blocks in the northern half of WURZBURG by nightfall.  The 222d Infantry also resumed the attack at daylight on 4 April with the 1st and 2d Bns advancing in the southern portion of WURZBURG against strong enemy resistance.  Approximately 45 additional blocks were cleared, and the regiment had advanced across the North-South Railroad and cleared the factory building on the east of the tracks by dark.  The 3d Bn, 222d Infantry, designated as “T” Force, moved into Wurzburg and seized 15 of the 45 special targets designated

Sgt. R. B. McDavid, Dairy ’43, of Pelzer, has been killed in action in Germany.  While at Clemson he was a member of the Alpha Zeta, Phi Kappa Phi and Dairy Club.
Extract from The Tiger the Clemson student newspaper. 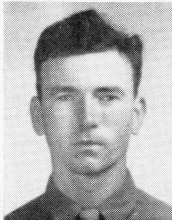 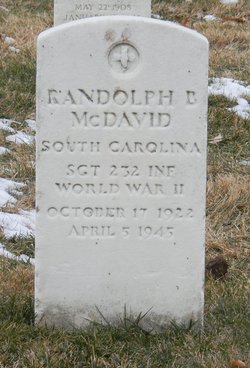