Personal Remembrance:
Before I will tell you the reason for this Email, I would like to introduce myself.  I am an 71 year old former forester and was employed in the state forestry administration of BADEN-WÜRTTEMBERG (Southwest of GERMANY).  In the German Army I was at last a Lieutenant Colonel of Reserve.

I was born in a small village (UNTERSTEINBACH) about 45 km northeast of STUTTGART (Capital Town of BADEN-WÜRTTEMBERG).  From this village, situated in a valley, on 25th of February 1944, my mother took me along to a place about 4 km away on the neighboring plateau.  There, close to a farm named RAPPENHOF, belonging to a village named GEISSELHARDT, the day before an airplane did crash.  Though only 2 years and 7 months old, I did grasp a number of details, which I did never forget.  In 2009 I decided to clear up the matter.  This was a difficult project, because the incident was not put down in the archives around GEISSELHARDT and of the County of SCHWÄBISCH HALL.  In the meantime I found observers of the crash (at that time around 12 years and 18 years old) and by help of a journalist I did receive the MACR.  It is the MACR 2766, not MACR 2786!  The B17 did belong to a formation, which attacked SCHWEINFURT in the noon of 24th February, became hit by flak and tried to reach SWITZERLAND.  After about 110 km the pilot, 1st Lt Harry A. PATTERSON tried a forced landing.  Five men died in the crash, one more next night in hospital.  Four men were captured and returned into the UNITED STATES after the war.

From time to time I try to find more information about "364th BS" in the internet.  So today I came across Your Website.  With great respect and recognition to the dignified manner, how you preserve the memento of your war dead and with kind regards
Walter Wiedmann
Bierawaweg 11/8
Germany

INDIVIDUAL CASUALTY QUESTIONNAIRE
Name of Crew Member: Davis, Raymond D.
Rank:1st Lt.
Serial Number: 0-733622
Position: Co-Pilot
Did he bail out?  I don’t think so.
If not, why not?  We were trying to make Switzerland.
Lost contact or conversation just prior to or at time of loss of plane:  Told us to throw everything out to lighten plane.
Where was he last seen?  At takeoff of plane
Any hearsay information?  German doctor said he was killed.
Total number of missions of above crew member:  No knowledge
Statement by: Unknown

Last Known Activity
Raymond Daniel Davis was born in Calhoun, County  South Carolina on September 16, 1919.  He was the son of Raymond A. Davis.  He attended Clemson College for the academic years 1936 to 1938, but left to take a job as a photographer.  According to his NARA enlistment record, he enlisted in the Air Corps as a private at Fort Moultrie, South Carolina on November 15, 1940.  He was accepted into the Aviation Cadet program, and attended flight school.  He graduated, and was commissioned in late 1942.

He was then assigned to an operational unit for further training and combat crew assignment.  He became a co-pilot on the B-17 aircraft as part of the Patterson crew, headed by Lt Harry A. Patterson.  This crew deployed to England in February 1943 where they were assigned to the 364th Bomb Squadron of the 305th Bomb Group, operating from Chelveston, England.  According to personal history in Clemson University records, he was single when at Clemson, but married Betty Cox on January 15, 1944.  Because he deployed overseas in 1943, it is not known if he was on leave to U.S., or married in England.

On February 24, 1944, the crew was scheduled to participate in a bombing raid on Schweinfurt, Germany.  The aircraft was hit by flak over the target and heavily damaged.  The pilot attempted to go to Switzerland, but was shot down by enemy aircraft and crashed.  The entire crew was killed, but bodies were recovered.  Eventually, most crew members were buried in the Lorraine American Cemetery in France, but Lt Davis was returned to the U.S. and buried in the Pine Hill Methodist Church cemetery in Cameron, South Carolina.
Copied from: https://airforce.togetherweserved.com/usaf/servlet/tws.webapp.WebApp?cmd=ShadowBoxProfile&type=Person&ID=157543

Other: Attended Clemson Agricultural College 1936 – 1938.  After leaving Clemson he worked as a photographer and eventually entered the service in 1940.
https://www.wwiimemorial.com/registry/wardept/pframe.asp?HonoreeID=1268400&popcount=3&tcount=3 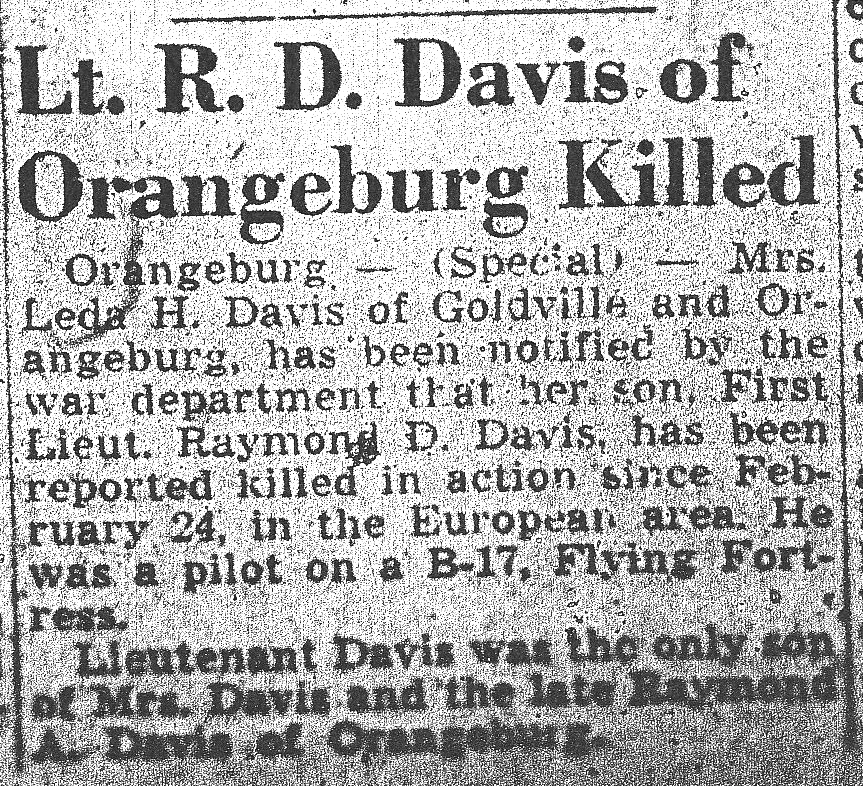 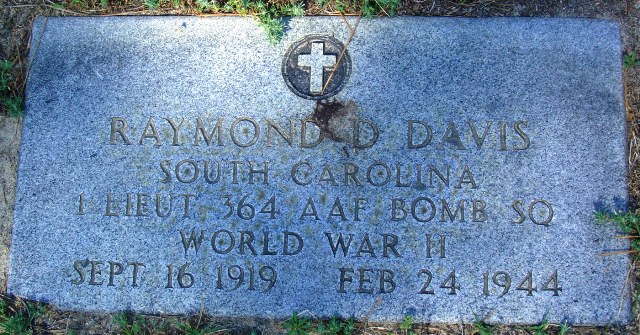 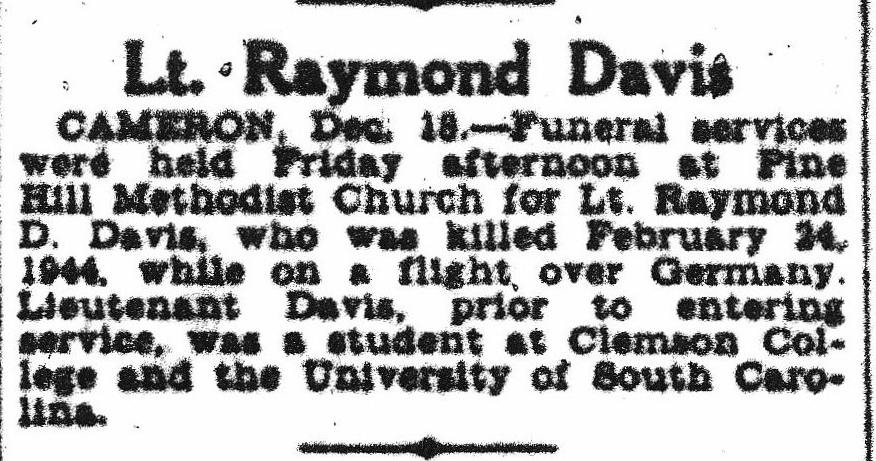