Known simply as “Anzio,” the battle in which Sgt. Robert B. Williams, (Co. G,  2nd Battalion, 30th Infantry Regiment, 3rd Infantry Division), was fatally wounded was long overshadowed by an event that was to occur shortly after – that is, the Allied invasion of Normandy in June, 1944.  Over time, however, military historians have come to acknowledge the Anzio campaign as one of the most bloody and violent of the war in Europe.

Stalled in their drive to northern Italy some 90 miles south of Rome in the mountains near Cassino, the Allies launched a plan to land an invasion force of some 36,000 men behind German lines at the twin resort towns of Anzio-Nettuno.  The initial landings on January 22-23, 1944, met with little resistance, and the Allies quickly established a beachhead roughly 25 miles long along the coast, and 15 miles deep.  The Germans quickly rushed in thousands of reinforcements, took command of the surrounding hills, and the battle turned into a stalemate that would last four months.

With German artillery pounding the beachhead day and night for weeks on end, nowhere in Anzio was considered safe, and photographs depict scenes more reminiscent of the Western Front of WW I, with men living below ground in foxholes, trenches and dugouts, while waiting to go on the attack or to defend against the Germans.  The battle itself was a long series of offensives and counter offensives, with each side taking turns pushing the other back, or fighting to re-take a lost position.  For medical personnel like Sgt. Williams, Anzio was particularly deadly, as they would need to constantly expose themselves to shell-and-gun fire to go to the aid of a fallen comrade.

Ultimately, the Allies would send 150,000 men into the Anzio cauldron, and of these, 7,000 were killed and another 36,000 were wounded, missing or taken prisoner.  Seven hundred of those killed were from Sgt. Williams’s regiment, the 30th Infantry.  Finally, near the end of May, the stalemate was broken and the Allies pushed through the Alban Hills and on to Rome. In their retreat, the Germans abandoned the city, and Rome was declared liberated on June 4.  Two days later, Allied forces from England would land on the beaches of northern France, and the liberation of north-west Europe would begin.  In Italy, the fighting would continue for another 11 months, until the very last days of the war in Europe.

Herald Journal: “Robert Bankston Williams, a young man of the highest caliber, was wounded soon after his arrival in Europe in WWII. He lingered on a few days dying in Naples. He is buried among his buddies in Anzio Beach.”

A memorial service was held at the Hawthorne Lane Methodist Church on May 21, 1944. 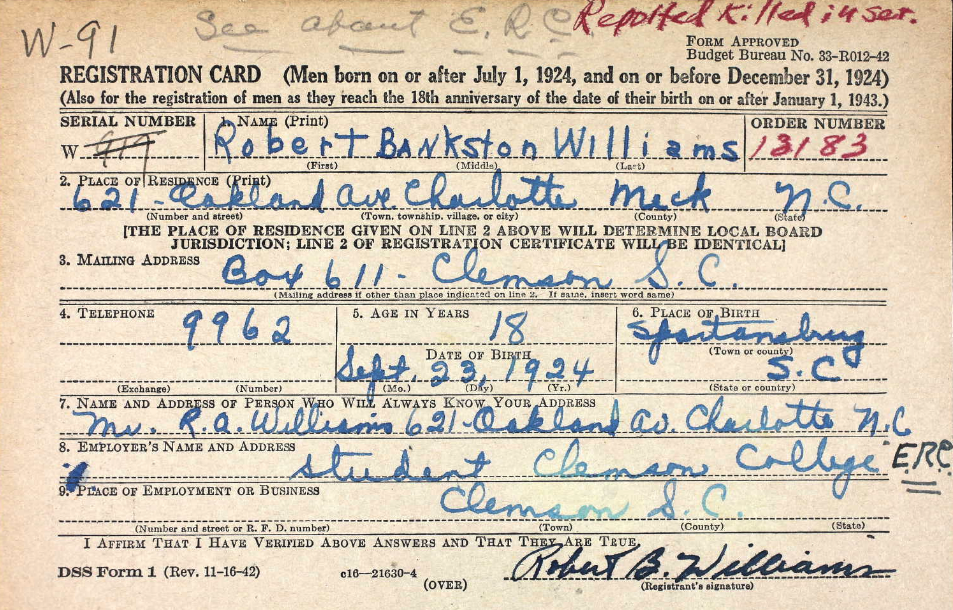