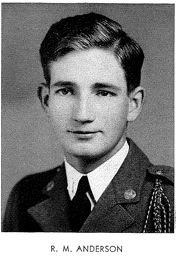 Robert Moffat Anderson, the son of Mr. and Mrs. F.W. Anderson, was born in 1920 in Chester, South Carolina.  He graduated from Chester High School, and then attended Clemson College, graduating with a degree in Mechanical Engineering in 1941.  While at Clemson, he was a member of the ROTC unit as a 1st Lieutenant, holding the position of Platoon Leader with the company.

He enlisted in the Army Air Corps’ Aviation Cadet program on July 15, 1941.  He received flight training and was commissioned a 2nd Lieutenant.  After organizational and combat crew training, he was sent overseas in October, 1942.  He arrived at Chelveston, England and was assigned to the 365th Bomb Squadron of the 305th Bomb Group.

He was assigned as co-pilot to a crew headed by Lt Conrad Hilbinger.  On January 13, 1943, the crew was scheduled for a mission against the locomotive works at Lille, France.  Once the target was reached, the flak was intense but not especially accurate.  It was on the return trip over Belgium that Hilbinger’s B-17 was hit with 5 bursts of flak.  The aircraft crashed near Pollinkhove, Belgium.

All the crew were killed.  The bodies were recovered and buried locally.  After the war, the remains were transferred to Ardennes American Cemetery in Belgium.  Sometime later (approximately 1945 – 1948) Lt Anderson’s remains were returned to the U.S. and buried in Evergreen Cemetery in Chester, South Carolina, where he lies today.

In 2003, the inhabitants of Pollinkhove erected a monument to the crew of this aircraft. 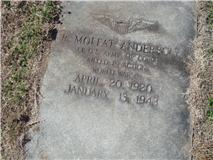