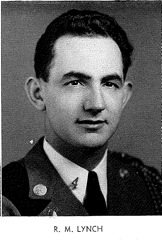 Summary Missing Air Crew Report – 2LT Lynch was the navigator of an 8th Air Force B-17.  On 11 September 1945, Lynch’s aircraft was part of a force dispatched to bomb synthetic oil refineries at Ruhland, in eastern German.  While on their bombing run, at approximately 1256 hours, just as the aircraft reached the initial point, it was attacked by a large formation of Focke-Wulf 190 fighters.  The aircraft received many hits from the fighters’ 20 mm guns, totally disabling the aircraft and setting the bomb bay and two engines on fire.  Six crew members escaped the aircraft by parachute, including bombardier Joe Michaud.  Michaud landed close to the wreckage of the aircraft, but before he could reach it, its bombs began exploding, destroying what was left.  Michaud did not believe Lynch, whom he thought to be injured, had escaped the aircraft.