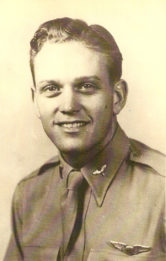 While a student at Clemson, Boyce, Jr. enlisted November 20, 1942 in the US Army Air Corps (now US Air Force).  In 1944 he was sent overseas with the 406th Fighter Squadron, 371st Fighter Group in the European Theater of Operations.  As a P-47 Thunderbolt Fighter Pilot with 58 successful missions during the last days of WWII, he was promoted to rank of First Lieutenant on 20 March 1945.  Then, on 23 March 1945 near Speyer, Germany, his plane was caught in enemy flak and crashed.  He was initially interred in St. Avold American Cemetery in France, and in 1948 he was buried with family in his hometown cemetery in Rutherford County, Cliffside NC.

Our uncle was posthumously awarded and decorated as a WW II hero with national and international honors.  Through the years, his name has been engraved on the Greenville County, SC  Wall of Remembrance and the Battle of Normandy Foundation Wall of Liberty.  In 2002, Anita Price Davis included him among the 149 service men in her tribute, Real Heroes: Rutherford County Men Who Made the Supreme Sacrifice during World War II.  More recently, he was an honoree of the World War II Memorial in Washington DC and now his name will be on the Scroll of Honor.
- Nieces Anne and Paula Cargill, Greenville, SC

To Mama:
"I will try to tell you as much as possible of what Chaplain Howard told me about his death.  Boyce Jr. had gone out on a mission the morning of March 23 and while over or near the Rhine river he radioed in that he had been hit.  Some of the others who were on the mission with him saw him go down, but didn't know just what happened to him.  A day or two later his organization received word that they had found his plane and had recovered his body, and that he had been shot through the head.  The incident occurred near Speyer, which I believe is in Germany.  I have the name of the place where it happened and will write you later as to the exact place.  Chaplain Howard said he would be given burial with proper military honors and ceremonies by his group.  He also said he would inform me as to the location of the cemetery in which he was buried." France, 27 March 1945
- H. Paul Bridges (Clemson Class of 1935)

The citations for the medals are as follow:
Air Medal and Two Oak Leaf Clusters:  “For meritorious Air achievement while participating in sustained operational flights against the enemy.”

Silver Star:
For gallantry in action while participating in aerial flight against the enemy on March 23, 1945.  Lieutenant Bridges exhibited extraordinary courage and devotion to duty while leading a flight on a bombing mission in connection with air ground operations.  After successfully dive-bombing a ferry on the Rhine, in the face of intense anti-aircraft fire, he gallantly descended to minimum altitude to strike an enemy transport and gun positions.  His superior airmanship and determination despite innumerable odds were contributing factors to the success of the allied air offensive and were in keeping with the highest traditions of the Army Air Forces.
Extract from: Real Heroes: Rutherford County Men Who Made the Supreme Sacrifice During WWII, by Dr. Anita Price Davis and The Rutherford County News, 1/10/1946.

His name is engraved on the Greenville County, SC Veterans Wall of Remembrance and the Battle of Normandy Foundation Wall of Liberty.

First Lieut. S. Boyce Bridges, Eng. ’42-43, of Cliffside, NC, was killed in action March 23rd in Germany.  A special memorial service was held in his honor in April 22nd in Henrietta, NC.

Lieutenant Bridges entered the services in February, 1943.  He received his commission as second lieutenant in the Air Corps at Jackson, Miss., in April 1944.  Lt. Bridges was a P-47 Thunderbolt pilot with the Ninth Air Force.  He had received the Air Medal and even Oak Leaf Cluster while flying 56 missions.
Extracted from The Tiger – the Clemson student newspaper.

American Crash Report
Additional Information to Missing Air Crew Report concerning 1st Lt. Doctor S. B. Bridges, 0-829814, A/C type P-47D-26RE, AAF No. 44-19859, date of crash 23 March 1945:
While making a straffing pass to the South on an M/T column traveling East on a road Southwest of Speyer, Lt. Bridges, who was leading Yearling Yellow flight, was hit by flak.  Lt. Bridges pulled straight up, then started turn, while I broke sharply inside of him.  As I circled back toward the cover flight, Lt. Bridges called out that he had been hit and that he was going to have to belly-in.  I watched him loose altitude and head West for an open field.  As he approached this field, the plane went into a violent skid, rolled nearly over on its back, hit the ground, and thereupon burst into flames.
Bernard F. Manfred
2nd Lt., Air Corps.

I was flying #4 position in Yearling Yellow flight, with Lt. Bridges leading.  We had finished bombing a ferry on the Rhine river, and then went down to strafe a column of enemy M/T’s Southwest of Speyer.  As we did so, there was a heavy concentration of light flak.  Lt. Bridges was hit, and tried to belly-in but evidently hit some wires for he flipped to the left and went in.  The ship exploded in two bursts.
Henry Hirsch, (NMI)
1st Lt., Air Corps.
_____________
German Crash Report

Last known Axtivities
Doctor Samuel Boyce Bridges, Jr. was born on June 20, 1924 in Cliffside, North Carolina.  He was the son of Doctor S.B. Bridges, Sr and Chastity Ann Ritter Bridges.  “Doctor” was his given name, as it was his father’s.  There was no connection to the medical field.  In fact, for many years, the elder Doctor Bridges was the head of the weaving department at Cliffside Textile Mill.

“Doc” as he was known, attended and graduated from Cliffside High School in 1940.  He then enrolled in Clemson College, studying engineering.  On November 20, 1942, he left school to enlist in the Army Air Corps as a private.  He was accepted as an aviation cadet, and received basic, primary, and advanced training at Lebanon and Nashville, Tennessee; Maxwell Field, Alabama; and Jackson and Greenville, Mississippi.  He graduated, was commissioned, and awarded wings at Jackson, Mississippi on April 15, 1944.

On December 25, 1941, he had married Mary Elizabeth Carpenter.  He was deployed overseas on September 18, 1944, and was assigned to the 406th Fighter Squadron of the 371st Fighter Group.  The Group was originally in England, but after D-Day, moved to a forward air strip, ALG Y-1 at Tantonville, France.  Lt Bridges flew 58 missions, mostly as bomber escort or ground attack in support of Allied troops. On March 23, 1945, he was assigned a dive-bombing mission on German positions.  In the face of intense flak, he carried out his mission, bombing and strafing the targets.  He went to minimum altitude to strafe German transports and gun positions near Speyer, Germany.  His aircraft was hit by ground fire, but he radioed his wingman that he would belly-land.  More hits by ground fire set the aircraft ablaze, but Lt Bridges was intent on landing.  Evidently he hit some wires near the ground as the aircraft did a double roll and crashed.

He managed to escape from the burning wreckage, but was shot by a sniper.  His body was found by Allied troops as they captured the area and town one hour later.  He was originally buried in St Avold American Military Cemetery in France, but in 1948, his body was returned to the family.  He is now buried in Cliffside Cemetery, North Carolina.  The marker there contains an error as it lists his birth day as “June 24,1924.”  The marker is said to be the tallest in the cemetery.

Copied from: Together we Served – https://airforce.togetherweserved.com/usaf/servlet/tws.webapp.WebAppcmd=ShadowBoxProfile&type=Person&ID=156956 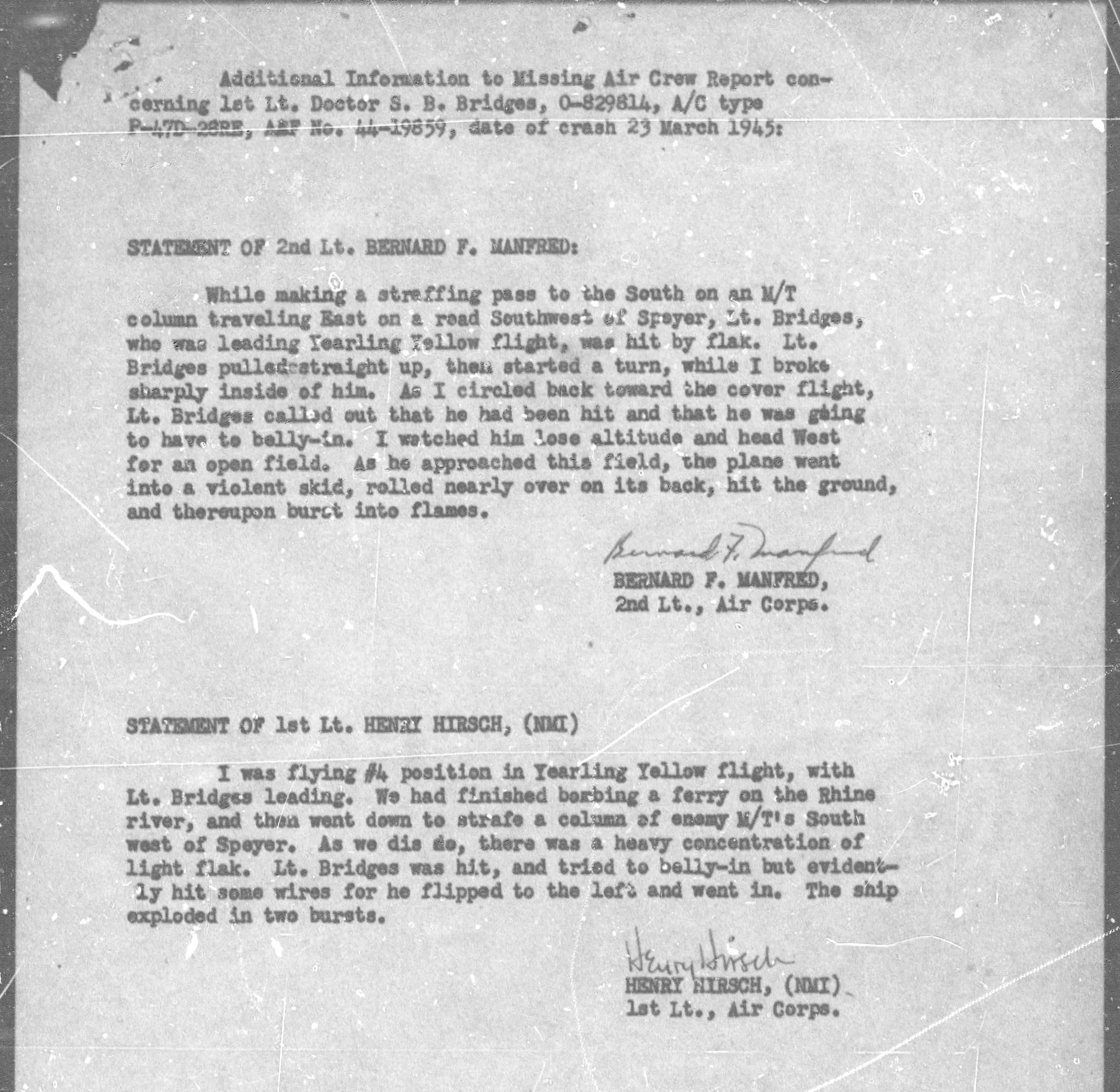 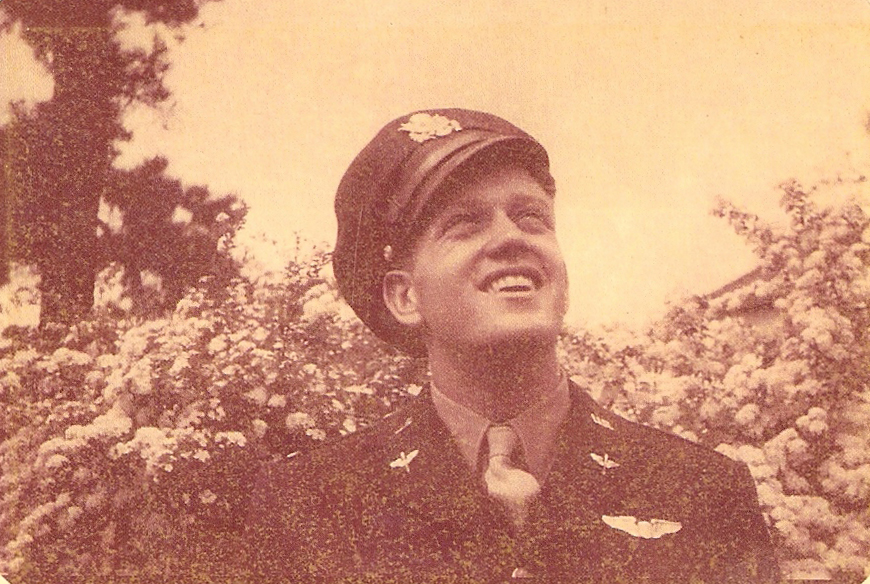 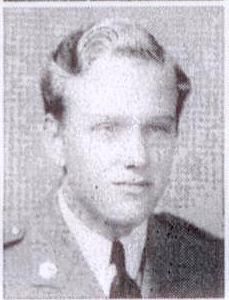 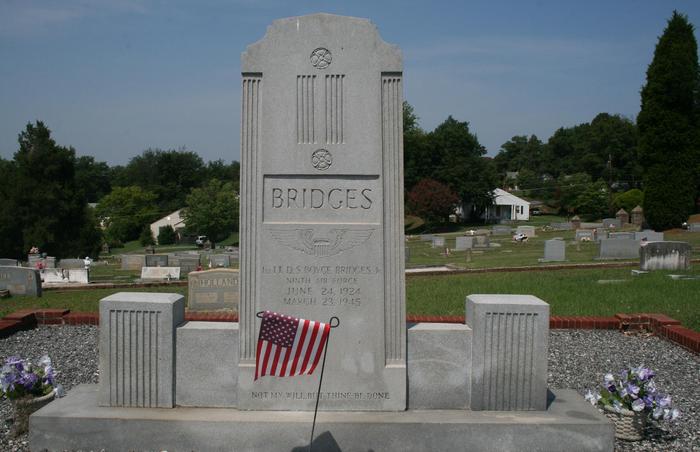 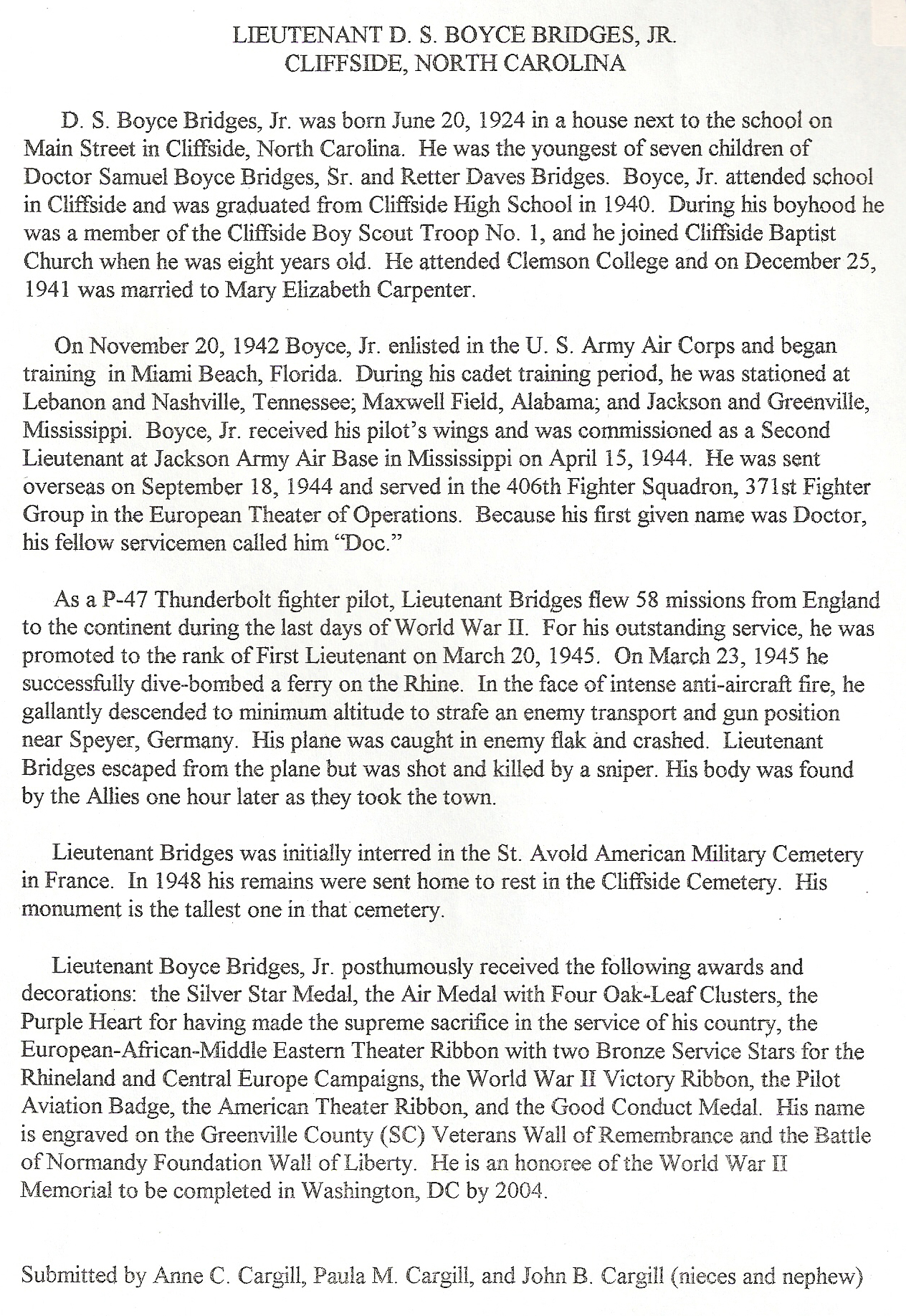