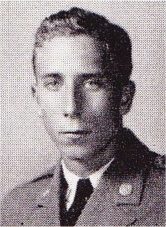 
Narrative of eyewitness statements:
1.      While at an altitude of 20,000 feet, the plane was given permission to join a three-ship formation at the number four position.
2.      The plane made a turn to the left while the formation was turning slightly to the right.
3.      It is believed that the sun affected the vision of the pilot and he came up directly underneath the ship in the number three position.  The occupants of the number three ship didn’t have the visibility to warn their pilot of his presence.
4.      A crash resulted with the lower ship disintegrating in the air and the other ship making an emergency landing.

Eight Others Died With Sergeant Bass

Eight companions were killed in the accident that took the life of Sgt. Thomas G. Bass, Jr., of Latta, at Salt Flats, New Mexico, when the plane in which they were making a routine flight crashed.
Sgt. Bass was born in Latta September 14, 1920.  He graduated from the Latta High School in 1938 where he was a popular football and basketball star.  He attended Clemson College.  He was a member of the Baptist Church.
He entered service in October, 1942, being inducted at Shaw Field.  He trained at Seymour Johnson Field, Curtis Wright Field, and Buckingham Field, where he received his wings.  At Salt Lake City base he was re-inducted and trained at Moses Lake Air Base, Wash; Pendleton Field, Ore.; Walla Walla Air Base, Washington, and had just been transferred to Tyote,Texas base where the accident occurred.

Latta was saddened by the announcement that Sgt. Thomas J Bass, Jr., had died in an accident Friday, December 3rd, at 4:30 o’clock near Salt Flats, N M.  Flying Fortresses were in close formation in routine flight.  A plane caught in an air pocket crashed into the plane in which Sgt. Bass rode.  This Fortress fell to the ground.  Eight fliers died in the accident, while the other two in the plane were hospitalized.  In the plane that caused the crash all were saved as it was able to right itself and make landing.
Sgt. Bass was born in Latta September 14, 1920.  He was graduated from the Latta High School in 1938 where he was a popular football, baseball and basketball star.  Tom was idolized by the little boys with whom he liked to play even when at home on leave.  He attended Clemson College and was a member of the Baptist Church.
Sgt. Bass entered the service in October 1942, and was inducted at Shaw Field.  He trained at Seymour Johnson Field, Curtis Wright Field, and Buckingham Field, where he received his wings.  At Salt Lake City base he was re-inducted and trained at Moses Lake Air Base, Washington and Pendleton Field, Oregon, Walla Walla Base, Washington, and had just been transferred to Tyote, Texas, where the accident occurred. H e was the aerial engineer on the plane.
Tom was the son of Thomas Joseph and Lois Atkinson Bass.  He is survived by his parents and a sister, Henrietta Bass of Latta; and Newport News, Va.  A large family connection, and a host of friends mourn his passing.
The remains arrived in Latta Friday morning with Sgt. D. W. Guffey of Pyote as escort.  Funeral services were held in the afternoon at 4:30 o’clock at the residence.  Rev. Theron Anderson, Tom’s pastor, had charge, and spoke feelingly of Tom’s characteristics of fidelity, thoughtfulness, perseverance and dependability.  Rev. James Trammell of the Methodist church assisted.  Four local boys in the service, Capt. F. L. Carpenter, Lieut. Lamar Bethea, Pfc. Henry L Bethea, and Pfc. John D Coleman, were among the pallbearers.  Pfc. Joseph Williams was home on pass for the funeral, but became ill and could not serve.  Sgt. Guffey also acted.  The other pallbearers were from a detail from Florence Air Base.  Chaplain A. C. Aston of Fort Bragg, a neighbor and teacher of Sgt. Bass, had charge of the military funeral at the cemetery.  A detail from Camp McArthur, Florence, under Chaplain Kirk furnished an escort, fired the salute, and sounded the antiphonal taps.
The service was very impressive.  There was hardly a dry eye.  Handsome and numerous floral offerings and a large crowd present to pay last respects, attested the esteem in which Tom was held.
One was heard to say that Latta must present a clean democracy if she were to prove worthy of the supreme sacrifice made by this upstanding young man, and the heartbreak of his estimable family.  Tom loved his country and served it to its utmost.
Obituaries were provided by Helen Belden Moody – Visit Helen’s Little Corner at https://www.helenslittlecorner 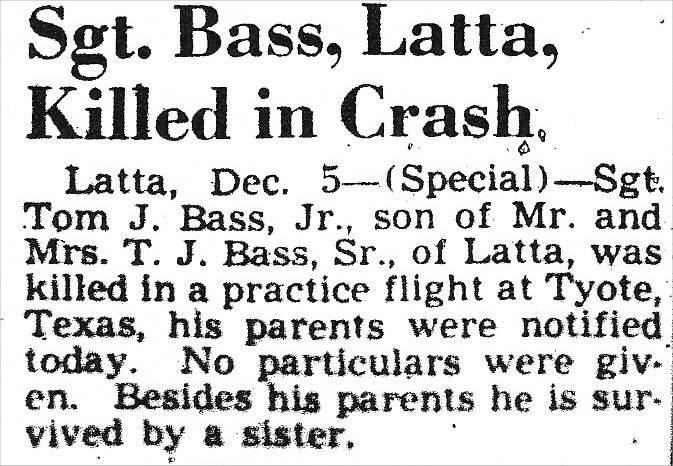