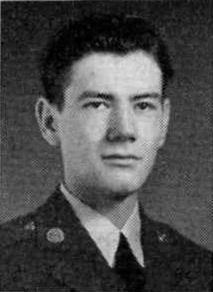 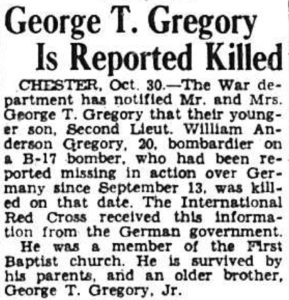 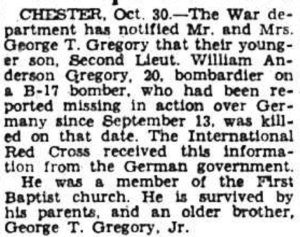 The 19 year old son of George T., Sr. and Inez Gregory, William had just completed the first semester of his sophomore year at Clemson in the ROTC program, as an engineering major.  It was early February of 1943 when he traveled to Miami Beach, FL with his best friend and Clemson classmate Jesse (Gene) Gregory (not a close relative) to join the USAF as an aviation cadet.  He would master the rigorous requirements and become a Bombardier, commissioned as a Second Lieutenant in the USAAF.  They were together from basic training through bombardier school and commissioning.  William was stationed in Thurleigh, England assigned to the 306th Bomb Group where he flew 12 missions.  On his last mission, his B-17, named “The Heavenly Body” by the crew, taxied for takeoff in the pre-dawn of 13 September 1944.  The hydraulic brakes failed and they collided with the aircraft in front of them.  Their AC being now grounded, the “mission ready crew” was given the backup aircraft, the Duration Plus.  All was routine until minutes before the target at Merseburg, Germany when one of the 4 engines failed and was feathered.  On oxygen at 29,500 feet elevation, they continued over target and delivered their bomb load.  Almost immediately, they were hit by German antiaircraft fire near the co-pilot position.  Fire broke out and became uncontrollable.  It was later determined that ruptured oxygen lines fueled burning broken hydraulic lines in the co-pilot position, Gerald Johnson, was injured and being attended to below by the Navigator, Bernard Weinstein, and the Bombardier, William Gregory.  The order was given for the crew to bail out.  The Pilot Clayton Nattier set the controls and investigatied. Passing the three in the navigator’s area, he was told all was under control then proceeded to leave the aircraft.  It is unknown why these three did not manage to leave, possibly they were overcome by the fire.  Gregory, Weinstein, and Johnson were the only KIA.

William’s remains were located in 1946 by the Army QM, interred near the town of Halle, Germany.  They were re-interred by the QM in St.Avold, France in May 1948.  In July 1949 William’s remains with military escort, arrived in his home town of Chester, SC where the memorial service was held at the First Baptist Church.  Burial followed with Military Honor Guard and Salute at the grave site.  William was the younger brother of George T. Gregory, Jr., Chief Justice of the South Carolina State Supreme Court. 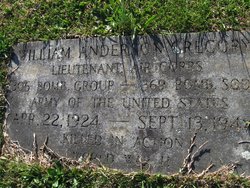