"Billy Preacher was a class behind me (1952).  He joined my company, Baker Company, 32nd Infantry Regiment of the 7th Infantry Division and shortly after that I was transferred to Battalion as Assistant S-3.  He was a platoon Leader.  Baker Company was involved in a counter attack on “Old Baldy” after the Columbian Unit lost the hill to the Chinese.  He was killed in that action.  I am certain of these facts.  We lost several men in that counter attack.  I saw his body in Graves Registration.  This was shortly after the Armistice."

"In 1953, enroute to Korea, I was at Fort Lewis, Washington.  There were many ex cadets that I knew from Clemson there at that time.  I think there were seven or eight.  Billy Preacher, from Ridgeland, SC was one of the ex cadets.  Billy played football at Clemson under coach Frank Howard. when we arrived in Korea, Billy was assigned to the 77th Division, I think.

I was assigned to the 293rd Graves Registration Company and was given the job of platoon leader of the 2nd platoon.  We were located due south of the 7th division which was on the front line.  About a week after, I was assigned the platoon leader's job.  We received several American dead.  Billy was one of the deceased.

We kept a log of all the dead that passed though my platoon, which was the forward collecting point for all the divisions.  They brought all the bodies to our tent mortuary where we made sure of their identity and did other processing tasks.  We shipped them daily to my company headquarters in Yong Dong Po, just south of Seoul.  They had them flown to Japan.  I looked through our log book many times and saw the names of several of my old classmates and meant to make a list of them to bring home.  Most of us had graduated in January 1952.

I got a call from my company in February of 1954 to get to the HQ immediately to come home, which left me no opportunity to go through the log book.  This has been a half century and my mind cannot recall the names of the others."

I knew Billy from playing football under Frank Howard during 1945.  He was an end and a great player.  In that year we didn't have very many players due to the war drafting people and most of our class were only 16 years of age, however, he was one of our team memebers.

Citation for the Silver Star medal:AWARD OF THE SILVER STAR — By direction of the President, under the provisions of the act of Congress approved 9 July 1918 (WD Bul 43, 1918), and pursuant to authority contained in AR 600-45, the Silver Star for gallantry in action is awarded the following named officers and enlisted men:

Second Lieutenant WILLIAM C. PREACHER, 02004669, Infantry, United States Army, a member of Company B, 32d Infantry, distinguished himself by gallantry in action near Chorwon, Korea.  On 24 March 1953, as Lieutenant Preacher’s unit attacked a strategic enemy-held hill, it received two heavy bombardments of enemy mortar, artillery, small-arms and grenade fire.  Lieutenant Preacher received a severe blast injury and was knocked unconscious on two different occasions.  As the attack continued, Lieutenant Preacher, refusing to return to the rear for medical aid, led his men in the bitter fighting that ensued.  When last seen, Lieutenant Preacher was valiantly leading his men in the attack, encouraging and rallying them to put forth their utmost efforts.  The gallantry displayed by Lieutenant Preacher reflects great credit on himself and is in keeping with the highest traditions of the military service.  Entered the Federal service from South Carolina. 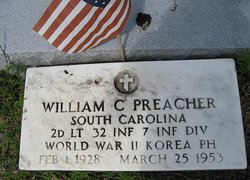 Recalled to Duty – Vignette Written by Kelly Durham for The Echo