1964
Biology
Longs, South Carolina
He was a son of Mr. and Mrs. Manley B. Carter of the Longs community in Horry County and was a graduate of Clemson University.  Also surviving are a brother, Marshall, a senior at Furman University; and a sister, Karen Carter of the home.
Navy, Lieutenant Junior Grade
USS Kearsarge (CVS-33), Air Anti-Submarine Squadron VS-21, Task Force 77, 7th Fleet
National Defense Service Medal, Vietnam Service Medal, Republic of Vietnam Gallantry Cross Unit Citation with Palm, Republic of Vietnam Campaign Medal
Dec 4, 1941
Nov 10, 1966
Killed in Action.  LTJG Carter was a crew member of a Martin Tracker Anti-Submarine Aircraft (S-2E) over the Gulf of Tonkin when contact with the aircraft was lost.
LTJG Carter’s body was lost at sea and not recovered
NW

"Dear Tommy, I never got to know you in person, but I have been told about you by someone who knew you.  My mother was Peggy Day.  She lived near you in Longs, SC.  I have always heard about how you are a hero and that we should never forget you and what you have given to this country. Thank you for being there. I know you are missed."

His name is inscribed on the Courts of the Missing at the Honolulu Memorial, Honolulu,  Hawaii.  There is also a memorial marker placed in his honor on his mother’s grave in the Buck Creek Cemetery, Buck Creek Baptist Church Longs, SC.

The following was taken from an obituary article printed in The State Newspaper, Columbia, SC on November 22, 1966, Page 4B, and was researched and provided on 7 November 2009 courtesy of Ms Debra Bloom, Local History Manager, Richland County Public Library, Columbia, SC.

Lt. Carter Is Killed On Mission

Memorial services for LT.(j.g.) William Tommy Carter are incomplete.  Lt. Carter, 25, was killed Nov 10 on a mission in the Gulf of Tonkin.  He was a United States Naval pilot stationed aboard the aircraft carrier Kearsarge and had been assigned duty in Vietnam for less than two weeks. 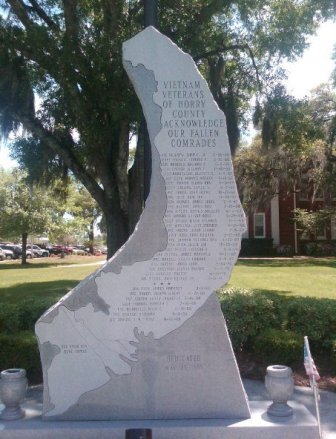 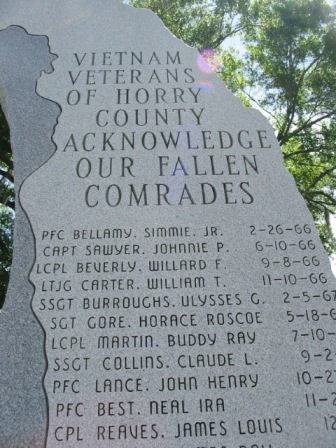